Ready or Not was one of the highlights of London’s horror film festival FrightFest. Wonderful in its balance of scares and laughs, it brings together a fine cast with a viciously vibrant script and highly inventive direction. Much of the film’s genius comes from its central device of games, a device that structures both the narrative and the film’s engagement with the audience. The film depicts a ritualized game, undertaken by the Le Domas clan, a ridiculously wealthy family whose fortune is built on games. Marrying into this family is Grace (Samara Weaving, “Three Billboards Outside Ebbing, Missouri”), a working class woman from foster homes who understands her new in-laws are strange and different, and is about to discover just how strange. On her wedding night, Grace takes part in the family ritual of playing a game, drawing the card of Hide & Seek. She swiftly discovers that this game comes with a deadly caveat, and thrills, spills, shocks and laughs abound from this premise.

The cast of Ready or Not are game (pun intended) playing thoroughly colorful characters, including Henry Czerny (“Remember”) as venal patriarch Tony, Nicky Guadagni (“Lars and the Real Girl”) as sinister Aunt Helene and Andie MacDowell (“Christmas Inheritance”) playing somewhat against type as mother Becky. Adam Brody (“Sleeping With Other People”) and Mark O’Brien (“State Like Sleep”) as brothers Daniel and Alex provide surprises as twists and turns put Grace through the wringer. Weaving is brilliant, moving from cynically agog at the Le Domas wealth while also very much in love with Alex, to stunned terror and disbelief, until she develops in a resourceful and kick-ass heroine up there with the best of the Final Girls. While it might not be accurate to describe Ready or Not as a slasher, it does offer some genuinely gruesome and inventive kills. Some of these kills led to great audience reactions, including roars as well as applause. A somewhat genius moment involves an accident with a crossbow, that might be the best comedic/horrific death since Marvin in “Pulp Fiction” got a bullet in the face.

Mixed in with this glorious gore is an unsubtle condemnation of the super rich, quite literally playing with the lives of those outside their restricted social circle, as well as the greed that encourages and corrupts social climbers. A particular highlight features Grace in a car that has a direct line to a help service, which proves entirely unhelpful to someone who does not possess the requisite bank balance. As events escalate and become ever more crazy and otherworldly, Directors Matt Bettinelli-Olpin and Tyler Gillett maintain an irresistible surge that sweeps the viewer along with Grace, with the final scene coming as a breathless release. Nonetheless, the viewer might well be tempted to go back for another round, as Ready or Not is a gorily gleeful and wonderfully inventive survival horror of jumps, laughs and devilishly horrible in-laws. 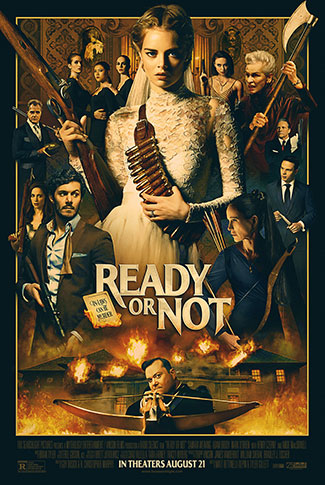