Mackenzie Davis (“Tully”) is currently in that sweet spot where she can do no wrong. She’s a highlight of every movie she appears in and continues to be a lively, engaging presence. Her starring role in the sketchy indie comedy Izzy Gets the F*ck Across Town is no exception. Without Davis, the movie would quickly collapse under the weight of its quirky desperation, but with her, the energy keeps flowing and the titular character’s zany adventures entertain even as the movie meanders in search of meaning.

Izzy Gets the F*ck Across Town is one of those fast-paced movies where the protagonist tries to accomplish some seemingly simple task (in this case, travelling across a stretch of Los Angeles) over the course of just a few hours and hilarious hijinks ensue. Izzy (Davis) discovers that her ex-boyfriend is now engaged to her ex-friend and she becomes instantly determined to crash the engagement party across town in hopes that she’ll be able to break up the couple.

These comedies, where one small thing leads to another and the attempt to accomplish an easy goal is complicated by increasingly unpredictable external forces, often work best when the plot has an oddly organic quality to it, but Izzy’s journey feels a little too mechanical at times. It’s as though the movie is so eager to prolong the craziness that it constantly veers into trouble even when there’s a much easier alternative.

As an example, at one point, Izzy attempts to ride her bike to her destination, but she ditches it when she receives a questionable offer for a free ride from a stranger. It should surprise no one other than Izzy when this doesn’t work out and she’s left stranded for one of many times throughout the movie.

It’s here that Davis’ talent comes most importantly into play, because she makes her character such a singularly stubborn slacker that the weak links between the various pit stops don’t feel so blatantly stupid and yet she pulls off this feat without losing her fiery charm that keeps us at least somewhat invested in Izzy’s plight.

Producer/writer/director Christian Papierniak owes almost everything to Davis’ performance since his script requires a considerable suspension of disbelief from even the most logically generous of viewers. Izzy herself keeps things interesting and a truly random cast of cameo-ing actors that includes Haley Joel Osment (“Almost Friends”) and Annie Potts (“Young Sheldon” TV series) helps keep the weird vibe afloat, too. Some of the little side adventures Izzy must endure are comically inspired, while others are expositional glue to fill in some cracks, but they all succeed at being lightly satisfying distractions.

Stepping back from the pieces to view the whole, it’s a bit lame that Izzy’s whole story here is reduced to chasing the guy that got away, a feeling that only deepens when we discover that the ex-boyfriend character (Alex Russell, “Jungle”) is a bit of a bore. Izzy is so lively and fun that saddling her with an unconvincing love story seems like a waste, especially since this sentimental spot appears to be the plot’s planned destination.

But not so fast! Izzy’s ending is surprisingly strong. For the first time in the entire movie, Papierniak communicates the message of the moment without a burst of frantically spewed dialogue. Izzy Gets the F*ck Across Town just lets the conclusion of this leg of Izzy’s journey speak for itself, quietly and confidently. The expectation of what comes next is left to our and Izzy’s imaginations, which feels entirely true to the title character. For such a chaotic experience overall, it’s a cool, calming note on which we can part ways. 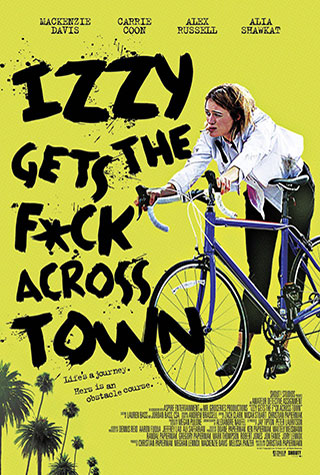