In a day where some churches feel that the larger donation you make, the closer you will be to God, and where the biggest donors are the ones despoiling the planet, there are several choices you can make: Blow yourself up and take some transgressors with you, accept it and internalize your despair, or find grace even in the most unlikely places. That is the dilemma facing Reverend Ernst Toller (Ethan Hawke, “Maudie”) in Paul Schrader’s (“The Canyons”) First Reformed, the story of a lonely, tormented priest seeking redemption for the sins he believes threaten the world. In his latest film, the writer of such iconic film classics as “Taxi Driver,” “Raging Bull,” and “The Last Temptation of Christ” pays homage to austere filmmakers of the past such as Robert Bresson, Ingmar Bergman, and Andrei Tarkovsky while adding his own touch of melodrama.

Like Travis Bickle, the mentally disturbed loner in “Taxi Driver” who turns to violence thinking it will make the world a better place, the gaunt, sickly Toller wrestles with how to respond to the possibility that the Earth is facing environmental catastrophe. Shot by Alexander Dynan (“Franca: Chaos and Creation”), the film begins as the camera zeroes in on a pristine white Dutch Reformed Church in upstate New York. Toller is the pastor of the church that was once part of the network known as the Underground Railroad, a safe house used to protect slaves headed to Canada. Unfortunately, the church now has sparse attendance and is more of a souvenir shop and tourist attraction than a place of worship.

A nearby church, Abundant Life Ministries, led by the charismatic Pastor Jeffers (Cedric the Entertainer, “Barbershop: The Next Cut”), and Ed Balq (Michael Gaston, “Bridge of Spies”), a wealthy conservative industrialist, constitutes the main support for First Reformed and is the biggest donor for their 250th anniversary celebration. Searching for the meaning of life after his son was killed in the Iraq War, Father Toller carries with him the burden of having persuaded the boy to enlist and the sadness of his marriage breakup after his son’s death.

He writes daily in the journal that he intends to burn after one year, conveying his thoughts and feelings about his struggles, his words conveyed to us in voiceover. Meaning comes to Toller in the person of Michael (Philip Ettinger, “Indignation”), an environmental activist who has just been released from prison for protesting assaults on the environment. Toller’s meeting with Michael was arranged by his wife Mary (Amanda Seyfried, “Love the Coopers”), a young pregnant woman frightened because her husband says that he wants to “kill the baby,” a disparaging reference to abortion. In a riveting discussion with Michael, in which the activist details scientists concern for the future ecological stability of the world, Father Toller discovers that he is uncertain about his own feelings and struggles to understand why Michael does not want to bring a child into the world.

He is soon convinced, however, that God is angry about how humans are treating the planet and is ready to translate his feelings into action. The problem becomes more urgent when Mary discovers a suicide vest that Michael has built and confides in Toller that she is frightened about what his plans may entail. As Toller’s health deteriorates, Reverend Jeffers and Esther (Victoria Hill, “Boys in the Trees”), the leader of the choir at Abundant Life and a former relationship, become concerned. Toller must now come face to face, not only with his health issues, but with the ramifications of a sudden traumatic event.

As the relationship between Mary and Toller become closer, in one scene, they lie face to face and experience a levitating spiritual epiphany, a lovely journey that takes them far beyond the Earth and allows them to put the stars in their pocket, capture Orion and dance among the Pleiades. As Schrader describes it, it is “that parallel world that we know is there but can’t see . . . a world right next to these characters, running right alongside of them, which they can almost reach out and touch.” Unfortunately, the experience is fleeting and the depressed Toller contemplates a radical way out. First Reformed is a bleak film but it is one that challenges us to confront issues that many filmmakers would rather avoid — what does it mean to be human?

Does our life have any meaning other than the one we ascribe to it? As the distraught priest, Ethan Hawke brings a tender humanity to the role, capturing the essence of a man torn between hope and despair. Perhaps the film that it most resembles is Robert Bresson’s 1951 masterpiece “Diary of a Country Priest,” based on the novel by Georges Bernanos. In that film, the Curé d’Ambricourt, a young Catholic priest assigned to a small country parish, is dying of stomach cancer and can only consume bread and wine. Rejected by his flock who think he is a drunk, the priest never loses his faith, the purity of his spirit, and his love of God, ultimately achieving the luminous awareness that grace is everywhere.

Like the Curé, Reverend Toller is challenged to discover that basing one’s actions on anger and self pity cannot solve the world’s problems, and that it is only love which is, to quote author Kevin Williams, “the very essence of being, the single point of infinite light, and the very life force of the universe.” 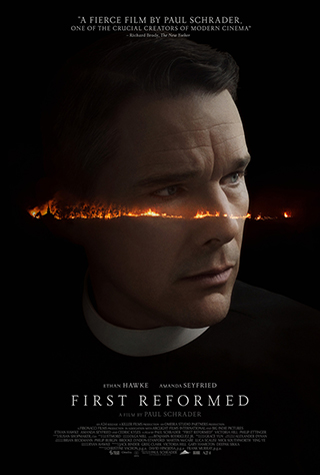