In Lucrecia Martel’s masterfully hypnotic Zama, the sensuous and seductive Luciana Pinares de Lueñga (Lola Dueñas, “Can’t Say Goodbye”) says that “Europe is best remembered by those who were never there.” If Zama is any indication, we might also conclude that South America might be better remembered if the Spanish conquistadors were never there. Based on the novel of the same name by Antonio di Benedetto (recently translated into English) and set on the coast of Paraguay in the late 1700s, Martel’s first feature in nine years explores the tragic legacy of European colonialism in South America through the gradual descent into madness of Don Diego de Zama (Daniel Giménez Cacho, “The Promise”), a bureaucratic functionary of imperial Spain existing on the periphery of power.

Perhaps reflecting the arrogance and entitlement that Martel has suggested characterizes Argentina’s middle class, the prideful Don Diego is stuck in an isolated settlement in Asunción while waiting for a transfer to Lerma, the capital of Argentina’s Salta region where he hopes to reunite with his wife and child. Zama feels that he is performing an important function for the Crown and that his services should be rewarded with a transfer, though his birth in the Americas and not Spain is against him. It is a transfer that seems, however, to be beyond his grasp. The film opens as Zama dressed in full colonial regalia and three-cornered hat stands on a beach looking out at the Paraguay River like an actor rehearsing to play George Washington.

The air is filled with sounds of ruffled grass, the flow of water, and the buzzing of insects, only interrupted by an occasional electronic tone that signals Zama’s growing stress. As a group of naked Indian women covered in mud talk to each other along the shore, Zama hides in the grass to observe them, but is discovered and chased away by one of the women who calls him a mirón, roughly translated as “voyeur.” Though he responds violently, Martel says that it is easy to identify with Zama because he is an “imperfect, weak, almost bad character” and because she feels that “there is much more humanity there than in heroes.”

Colonialism hovers in the background in every scene. White men and women wearing ostentatious wigs looking like time travelers from the court of Marie Antoinette are catered to by black servants, discharging their duties without emotion. In one scene, as Luciana is playing cruel games fending off Zama’s desires, she is being fanned by a mute black servant. Trapped in a gloomy settlement close to the jungle and its warlike tribes, Zama’s position becomes steadily more untenable and a feeling of failure is evident in his demeanor. He is even rejected by the indigenous woman with whom he has had a child and is reprimanded by a superior after an altercation with a junior officer (Juan Minujín, “Focus”). It is even more painful for him when he finds out that the officer in question has been sent to Lerma as punishment.

Realizing that he may never get his transfer, Zama joins a posse looking to find and kill the mysterious Vicuña Porto (Matheus Nachtergaele, “Filhos da Pátria” TV series) who has become the go-to scapegoat for the colonizers, but his increasingly hallucinatory adventure leads only to Zama’s further despair. Martel asserts that the film tries “to disturb our perception as viewers.” Like her earlier films, “La Cienaga,” “The Holy Girl,” and “The Headless Woman,” Zama challenges us to look past its ambiguity and lack of a coherent narrative to discover its slowly unfolding treasures. While Zama is a film about failure, its mixture of pride, pathos, and the absurd suggests they have much in common. 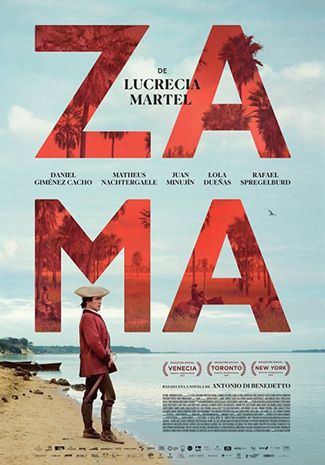