The battle towards achieving any sort of self-esteem is tougher than anything Marvel’s catalog of heroes endure on a movie-to-movie basis. And in writer/director Paul Downs Colaizzo’s first film, Brittany Runs a Marathon, the lead character’s inner struggles are cartoonishly amplified to an almost disturbing degree. But with a stellar performance by comedy darling Jillian Bell (“22 Jump Street”), this dated fairy tale is pushed in a much more charming direction than what is written on the page.

Inspired by Colaizzo’s roommate, the film introduces us to Brittany (Bell), a late 20-something New Yorker who struggles with many things; she has no career drive, parties too much, hangs with the wrong crowd and carries (as the film describes) “the weight of Siberian husky” on her from head to toe. But when Brittany is challenged by her doctor to make some important lifestyle changes, she is pushed in a new direction — one that leads her on a goal to run the famously impressive New York City Marathon.

As a woman that fits a very similar description to the film’s pre-marathon version of Brittany, sitting alone in a Manhattan movie theater was quite the bizarre experience. The woes that our lead goes through are not the least bit shocking — the societal pressures, the comparisons to other friends and celebrities, the list goes on. But even in a culture where representation on screen is craved, Brittany Runs a Marathon did not fill any sort of hole that more progressive creations, such as Hulu’s “Shrill” or this summer’s “Booksmart,” didn’t already. Instead, this film serves as a painful reminder of how many miles the media still has ahead of it when it comes to representing modern audiences of all sizes.

From a horrifying shot of our heroine putting a cheeseburger to her lips, lines of dialog echoing her “finally feeling like a woman” as she sheds the weight, to saying multiple nasty body-shaming comments — much of Colaizzo’s script comes off like a diet culture horror film — with every moment and line more painful and cringeworthy than the previous. Luckily, Colaizzo does eventually guide his heroine in a much less terrifying direction. And with the help of a stand-out sequence, showcasing the talents of big-screen newcomer Sarah Bolt, Brittany begins to learn a greater lesson than what is written on a Weight Watchers pamphlet.

On the page, Brittany is the sort of character that could leave you in an “Arthur-fist meme” sort of stance. She means well but is constantly making the worst decisions at every turn she gets, and on occasion might deserve (a loving) smack of reality in the face. But with Bell sitting in the driver’s seat, Brittany’s inner-transformation is not one of shedding pounds but of having the guts to become the leading lady in her own story — something the actress and her character share in common, since this is Bell’s first top-bill role. And if this is any indication of Bell’s dramatic acting future, then we’re in something truly special down in the line.

The rest of the film’s cast does their best to support both Jillian and the fictional Brittany on her self-care journey. There’s Michaela Watkins (“Under the Eiffel Tower”) as the flawed motherly figure Catherine, Utkarsh Ambudkar (“Blindspotting”) as Brittany’s dog-sitting buddy (and future something more) a.k.a Jern, Micah Stock (“Newly Single”) as Brittany’s first running buddy Seth — all of whom (in addition to the rest of the cast) bring warmth and a down-to-earth nature that sometimes this overly dramatic tale needs throughout its 104-minute runtime.

Overall, Brittany Runs a Marathon does have some borderline spooky tumbles and falls. But when it reaches the finish line, there is no denying that witnessing Brittany’s inner soul searching journey is a worthwhile one. Because no matter the way it is told, the effort to bring relevant stories to the big screen is an admirable one, even if it isn’t the biggest step in the right cinematic direction. 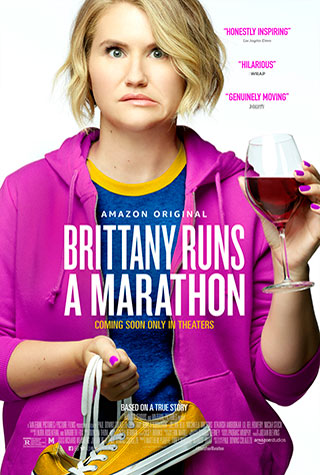