The premise of Good Mourning, Lucille sounds promising. A young woman searches for her twin sister’s killer by capturing on camera the actions of those closest to her. Makes you want to know more, doesn’t it? But that’s about where the intrigue ends in this somewhat hapless tale that’s weighed down by a weak cast and an ending that’s truly anticlimactic. There’s an intriguing tale to be told here, but Vanessa Libertad Garcia’s offering falls short despite a valiant effort.

The titular Lucille (Najarra Townsend, “Contracted: Phase II”) is an odd duck who has assembled associates to her remote (of course) home, six months after her sister Rachel’s disappearance, in order to figure out which of them did her in. There’s boyfriend Jack (Richard Banker), “healer”/therapist Selma (Mercedes LeAnza, “The Accidental Death of Joey by Sue”), best friend Sonia (Brit Manor, “Actors Anonymous”), college roommate Geneva (Sarah Connine), and Sonia’s current lover Madeline (Che Landon, “Broken Memories”). Each of them saw Rachel on the day she disappeared. So . . . Who done it?

Lucille’s plan is to secretly film everyone under the guise of making a memorial video for her sister, keeping everyone’s bags, phones, whatever, stored in a secret room (to prevent anyone from leaving until she finds out the truth). But, wouldn’t you know it, the plan goes off the rails fairly quickly as people reveal various secrets about themselves and the missing Rachel. These confessions are not earth shattering, and truly one can discern them before they’re said out loud. That’s because most of the characterizations — and, unfortunately, their portrayals — are paper thin. What you see is what you get, and this is generally not what one wants to witness in a murder mystery.

Who killed Rachel? First of all, as some characters note, the gal isn’t certain to be dead — just missing. For six months. And although she’s been gone for half a year, this odd lot do not seem particularly concerned as to Rachel’s whereabouts. Well, except for her wacky twin Lucille, of course. Lucille is basically the only one in the bunch who has secrets; as the hostess of the affair, she really needs to know things the others don’t. She has ulterior motives, that one. And hidden sexual feelings for at least one of her guests. In fact, there’s plenty of sexual tension to be found, and some of it gets resolved. Each time that happens, we seem to stray further from the main question at hand — what happened to Rachel?

As we learn more about the guests and how they really feel about each other and about Rachel, the less important Rachel’s ultimate fate seems. Half of me thought maybe Rachel would walk through the door at any moment, if only to chastise everyone for acting out so terribly. But when would have been a good time? When everyone sat in a circle and said what they loved about themselves and the person next to them? Or when people shed their clothes and danced naked? Or maybe when they hit the stocked bar, with predictable results? You get the feeling that in each of these situations, the guests’ behaviors were unusual for them. Which, one assumes, would have shocked and/or dismayed Rachel, had she borne witness to the proceedings.

Good Mourning, Lucille felt like it meandered, losing sight of its end game (i.e., the fate of Rachel) in favor of “People Behaving Badly.” There seemed to be more of a focus on fostering dissension than in solving the mystery. Maybe if Lucille had a few more tricks up her sleeveless dress, or there was a wild card thrown into the mix. Something to shake the truth loose — or at least move the viewer closer to the truth. But instead, Rachel’s fate is rendered almost superfluous.

The acting, as mentioned previously, was sub-optimal, but that’s understandable given the plethora of unnatural-sounding dialog the actors were given to deliver (courtesy of the director and Shannon Constantine Logan). Of all of the characters, only Madeline — who wasn’t really supposed to be there; she was Sonia’s plus-one — shows any real depth. Kudos to Ms. Landon for knocking the role out of the park. Townsend’s Lucille comes a close second, if only because Lucille is so daffy that she became the most interesting character almost by default.

About halfway through, I knew how I expected the movie to end. It did not end that way, and that’s because I gave Good Mourning, Lucille more credit than it deserved. The ending makes sense, which is good, but it’s also pedestrian and uncreative, which is bad. It seemed to me that the movie could have gone in any number of interesting directions but chose the safe route, which led to just an immensely unsatisfying denouement and movie watching experience. 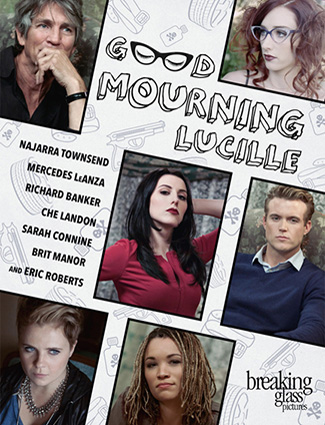