It is clear from the opening scene that The Burying Party, directed by newcomer Richard Weston, is undeniably ambitious — an important narrative about poet Wilfred Owen’s final months during World War I. Its execution, however, is poor.

Weston’s independent film runs just an hour long, though the minutes that comprise it feel more laborious than most. Owen, who was drawn to intellectual and academic circles while on furlough from the Manchester Regiment during the Great War, is effectively brought to life onscreen by Matthew Staite, though he is ambushed by stilted dialogue and poetic narration that overlays the film’s few memorable scenes. Owen’s poetic masterpieces, including “Dulce et Decorum est,” “Insensibility,” “Futility,” “Spring Offensive” and “Anthem for a Doomed Youth,” make magic on the page, illuminating the atrocities of trench warfare, but in this film, they simply distract.

The film tells Owen’s compelling story, as the seasoned young soldier suffers serious injuries and earns a “shell shock” diagnosis at Craiglockhart War Hospital in Edinburgh. It is here where he meets fellow soldier and poet, Siegfried Sassoon (Sid Phoenix, “Florence Foster Jenkins”), who introduces him to the city’s literary circles. After being sent back to the front lines, Owen composes a number of new works, inspired by Sassoon’s rebellious tendencies. His transformation from a romantic to a realist is apparent, as is his unique inspiration: The “pity” of war.

Returning to the U.K. in July 1918, Owen remains steadfast with his war duty, to the dismay of Sassoon, now a love interest. Sassoon, who’d sustained a “friendly-fire” head injury, goes on long-term sick leave, which prompts Owen to return to France, as the war remains his muse. His “betrayal” of Sassoon finds him in active combat once again, and he is killed on November 4, 1918 during the crossing of the Sambre-Oise Canal. It came just one week before the signing of the Armistice, which ended the war. His mother (Joyce Branagh, sister to English filmmaker Kenneth Branagh), is informed of the death on Armistice Day.

Weston’s style certainly rivals prominent filmmakers, namely James Ivory (“The Remains of the Day,” “Howards End”), who makes use of sprawling English vistas and character-driven storytelling. In that sense, Weston no doubt succeeds. The memorable moments of The Burying Party trail Owen and Sassoon, also a Freudian scholar, as they acknowledge the muddy hell of No Man’s Land. But lead actors Staite and Phoenix are tethered to a middling, even verbose, script that emphasizes an absent romanticism.

In the film, Owen, Sassoon and fellow soldier/emerging writer, Robert Graves (Will Burren, “Carnage”), who would go onto a successful career as a historical novelist, wander about the English countryside on leave, engaging in forbidden affairs and speaking nearly in verse. While formality was no doubt a custom in 1918 England, these soldiers somehow appear out of touch with the minutiae of daily existence — preferring instead lines of verse and philosophic mumbling. There is a rather sizable gulf between what the film aims to accomplish and the final product.

Another issue is the complete lack of verisimilitude in the war scenes, which screens more like a dream sequence than an attempt to capture the rawness and barbarity of the mustard gas, barbed wire and the yard-long land grabs that defined the French theater. The few war scenes feature unrealistic monologues from unnamed soldiers and off-screen violence that is supposed to equally motivate and horrify Owen.

Those interested in the era and this historical subgenre — as trench warfare continues to perplex historians and novelists alike — may be better served by Saul Dibb’s World War I film “Journey’s End,” or Peter Jackson’s groundbreaking documentary about the campaign, “They Shall Not Grow Old.” Those interested in Weston’s sort of artistic, visually inspired filmmaking may also take a stab at Ivory’s own impressive filmography. That’s because, despite its best intentions, The Burying Party fails to transport viewers to this hellish war. 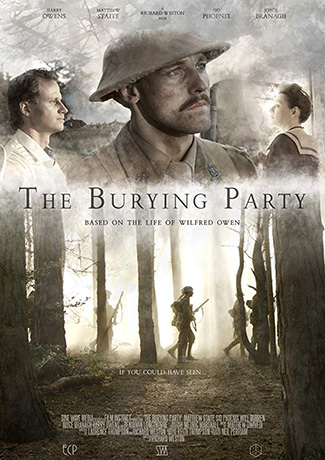