To find an uninteresting interview with a survivor of the holocaust is an impossible task. These are, after all, firsthand accounts of nightmares made real; memories from the extremist boundaries of the human experience. It’s akin to watching Apollo 11 astronauts Neil Armstrong and Buzz Aldrin discuss landing and walking on the moon, describing experiences the rest of us can only imagine. The events these people have seen, felt, done, and had done to them, are recorded in numerous written and visual forms, yet nothing quite compares to these experiences being relived as the spoken memoir. Even just watching a person sit in silence, eyes glazed over in deep thought and remembrance, offers a greater moral lesson than reading an entire textbook on the subject.

The purpose of Destination Unknown per its synopsis is to “blend intimate testimony with immersive archive to bring the stories of twelve Holocaust survivors to the screen.” Commencing in 2003, producer Llion Roberts met, spoke with, and filmed the dozen interviewees over a 13-year period, including a partisan freedom fighter, incarcerated children at Auschwitz, and Oskar Schindler’s right-hand man. Director and editor Claire Ferguson was brought on board in 2014 to combine the collection with historical footage into an overarching narrative, which has been complimented in style and tone by a score from Andrew Skeet that seems almost an offcut from “Schindler’s List.”

The issue with using this retroactive approach, however, is that it feels like a disjointed copycat, lacking idiosyncrasies and direction. We oscillate between the different harrowing accounts haphazardly with no clear timeline of events, drive, or message beyond the obvious. The interviews shot by Roberts are certainly well done and the survivors’ tales compelling, but whether they should have been assembled into a feature-length film is unclear. It’s hard to admit, given the subject matter, but there isn’t much fresh here. If the footage had been broken up and screened individually at Yad Vashem or a similar museum, it would have fit its mold. Instead, the question lingers as to whether this all needed to be compiled into a 78-minute runtime documentary.

Overall, Destination Unknown is a well-crafted piece, but it follows a well-trodden path. It hits its mark as a rumination on the atrocities of WWII, but it lacks the deeper insight that many preexisting works on the subject exhibit. 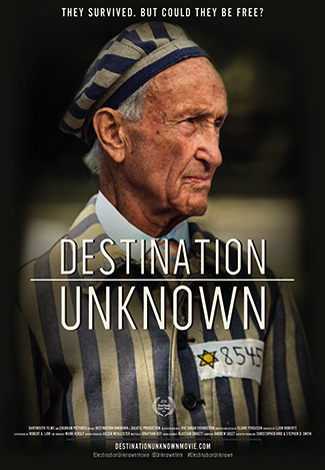