Historical and even scientific truth can be merely the consensus agreed upon by those who presently have the power and influence to determine public opinion, or it can be based on evidence that has been tested in the laboratory, in debate, or in a court of law. Written by David Hare and based on the book “History on Trial: My Day in Court with a Holocaust Denier” by Professor Deborah Lipstadt of Emory University in Atlanta, Mick Jackson’s Denial is an examination of Professor Lipstadt’s (Rachel Weisz, “The Light Between Oceans”) court battle in London to defend herself from a libel charge brought by British historian David Irving (Timothy Spall, “Mr. Turner”), a Holocaust denier and alleged anti-Semite. For all intents and purposes, it is a trial to determine whether or not the Holocaust was real.

Denial opens with Professor Lipstadt delivering a talk promoting her book to a roomful of students. One of the people in attendance is David Irving and some friends who are videotaping the lecture. Believing that the gas chambers were used only to destroy lice and that Hitler did not order the genocide of millions of Jews, he disrupts the talk by shouting that he will give one thousand dollars to anyone who can prove that Hitler gave the order to kill the Jews. Refusing to engage with the overwrought Irving, the confrontation ends when Irving is escorted out of the room by security, but it does not end there. In 1996, Irving sued Lipstadt and her British publisher, Penguin Books, in a London court, alleging they were part of an organized movement to destroy his reputation as a historian.

The film dramatizes the case using actual testimony based on court records but must be very selective in attempting to condense a trial that lasted four years into a less than two-hour film. Lipstadt soon learns that, under the British system, the burden of proof is not on the accuser but on the accused. Put simply, Lipstadt must prove that what she said about him in her book was true and that not only that he lied about the Holocaust but that it was intentional. While Irving acts as his own counsel, Lipstadt assembles a team of skillful lawyers including the soft-spoken solicitor Anthony Julius (Andrew Scott, “Alice Through the Looking Glass”) who represented Princess Diana in divorce proceedings and barrister Richard Rampton (Tom Wilkinson, “Snowden”), a man of quiet strength.

Tension develops early between the defendant and her team when, on a fact-finding visit to Auschwitz-Birkenau, Lipstadt accuses Rampton of being clinical and unemotional about what happened there, a charge to which he takes umbrage. Conflict also surfaces when Rampton and Julius decide that neither Lipstadt nor any Holocaust survivors will be put on the stand in order to keep the focus on Irving’s credibility and not give him the opportunity to badger or humiliate the witness. When Lipstadt argues that it is her right “to stand up against someone who wants to pervert the truth,” Rampton tells her that “these things are happening to you, but the case is not about you.”

One of the trial’s pivotal moments occurs when Rampton proves that Irving manipulated the call logs of Nazi Heinrich Himmler to hide Hitler’s role in the killing of the Jews, an occurrence that Irving calls a mistake. Rampton also produces a 1991 video in which Irving is heard to say, “I say quite tastelessly in fact that more women died on the back seat of Edward Kennedy’s car at Chappaquiddick than ever died in a gas chamber in Auschwitz.” Ultimately, Judge Charles Gray (Alex Jennings, “The Lady in the Van”) must decide on the merits of Irving’s libel suit, knowing that his decision will have reverberations far beyond this one court trial.

Denial is an important film on a subject that needs to be discussed, yet the film, unfortunately comes too close to one-dimensional hero making rather than concentrating on its key message, the necessity of separating fact from fiction, and fantasy from reality when it comes to historical events. While the performances are strong, especially those of Spall and Wilkinson, the characters are more symbolic than real and unnecessary subplots only muddy the waters. While the film correctly debunks the distortion of history in the pursuit of a political agenda, it is important to keep the issue in perspective.

Deflating conspiracy theories (in April 1967, the CIA coined the term and recommended methods for discrediting them) should not be a tool used by the powerful to stifle dissent and marginalize those with minority opinions. Each theory or different interpretations of fact should be judged on one measure alone — whether or not there is sufficient evidence to support it. Denial chronicles one theory that was examined and found to be baseless and the world will be forever grateful. 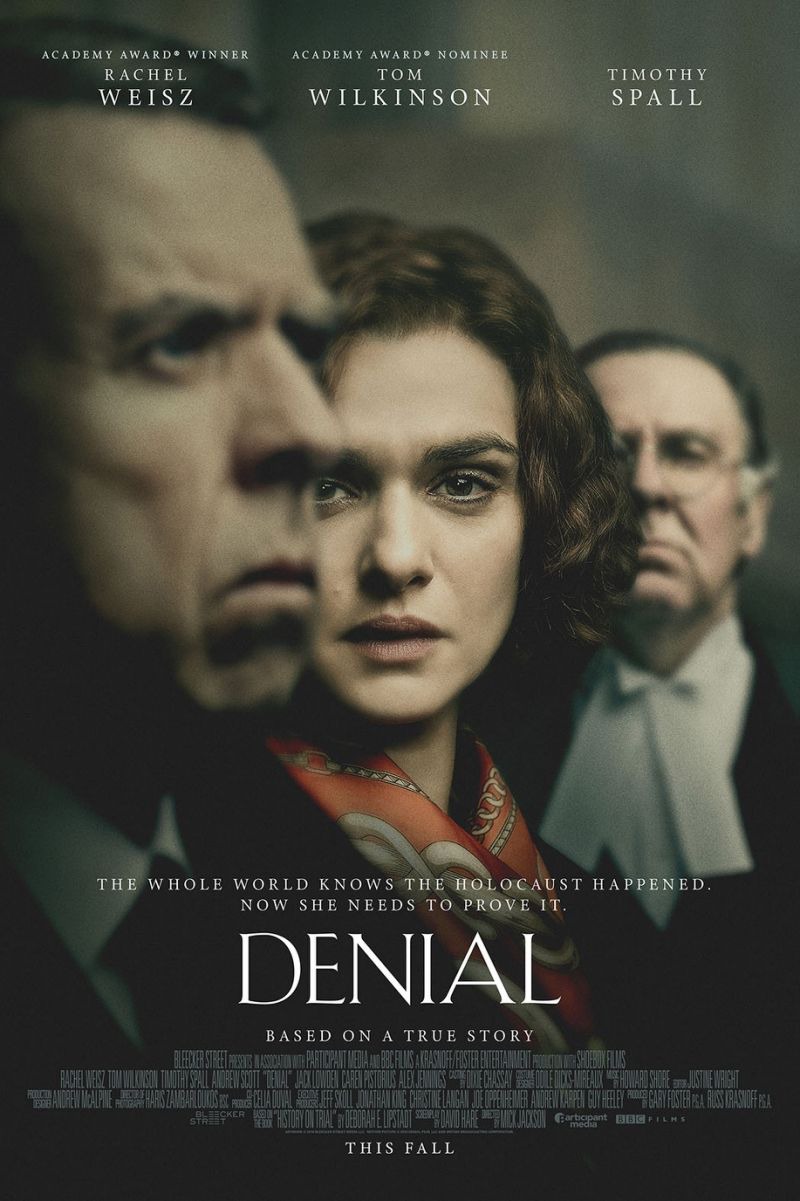