Happily, my inner bitch has been satisfied. This time around our unlucky loser is Alex Fletcher (Grant), a once proud 80’s pop star has hit hard times. He’s stuck singing to old ladies at Knoxberry Farm when the latest singing sensation Cora (Haley Bennett) comes to him to write her a hit love song. The problem? Fletcher can’t write lyrics. Enter Sophie Fisher (Drew Barrymore) a quirky tart whose true love is literature even though she tells herself she isn’t any good and a failure. Together they craft a pop pathetic song worthy of the best faggot hair metal band. Guess what? They fall in love while arguing and helping each other become better people.

Let me tell you why it works. Hugh Grant. It can’t be anything else. The premise for Music and Lyrics is basically the same as every other romantic comedy; the differences being the backdrop (the situation the people are in) and how the love interests ultimately meet and mate. For whatever reason, when writers write the dialogue for a Grant character they pull out all the stops. His semi-manly characters always say the funniest fucking things. That coupled with the fact that this goofy looking motherfucker has some sort of magic mojo flowing through him. That bumbly, stuttery dork persona pays big, big dividends. To bad we can’t invest in him — it would certainly pay better than most of our saving accounts. Another minor surprise is Drew Barrymore. I generally see her as a partying bimbo (good) with a body that should be better (bad) and an unfortunate tendency to talk out of the side of her mouth (worse). But since “50 First Dates,” she has certainly come into her own as the cute and ditsy love interest in these soppy love movies.

What doesn’t work? Well, it is another chick flick. And although it is better than the 25 others that will get released this year, it is still number 26. They are all cut from the same cloth and Music and Lyrics doesn’t offer us anything ground breaking. And watching Grant and Barrymore sing can be a bit painful. They certainly picked the better profession to make a living at because neither of them can sing a lick. Local dogs in the area howled in pain and cursed the Gods.

The simple truth is you’ll have a good time watching Music and Lyrics. At the least you’ll shit yourself at the very beginning when a very 80’s music video of Pop (Fletcher’s Whamm! ripoff) is shown. If you lived during this decade you’ll laugh (at yourself mostly) and if you didn’t, you can cringe at the clothes and hairstyles! It’s good to see Grant return to his bread and butter. Romantic comedies are better for it. 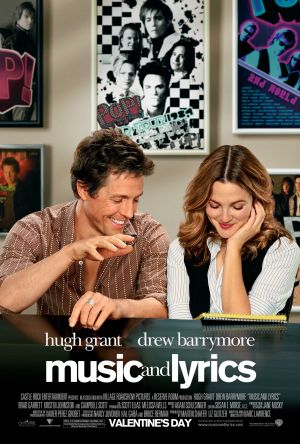