Missing Link, Laika’s latest stop-motion animated feature, opens not unlike an Indiana Jones entry. Our protagonist, Sir Lionel Frost (voiced by Hugh Jackman, “ The Greatest Showman”), along with his assistant, attempt to take pictures of the Loch Ness Monster. However, Frost quickly loses control of the situation, and despite his own precision and deftness, fails to take a picture of the beast. The opening is fun, action-packed, and beautifully animated. It also feels in many ways representative of Laika studios on a whole. For all their critical acclaim — their catalog boasts films such as “Coraline,” “The Boxtrolls,” and “Kubo and the Two Strings” — Laika has failed to connect with the average moviegoer, with each entry producing diminishing box office returns. Laika needs a mainstream hit, something that Missing Link is anything but.

This is not to say Missing Link is a bad film. It features an excellent voice cast making interesting choices, stunning animation, all tied together by a charming little narrative that delves into the impact of colonialism (yes really). However, it is for these reasons that it will not be for everyone. Given the choice between doing something conventional or something unique, writer-director Chris Butler chooses the unique.

Missing Link takes a tried and true story — Frost’s goal is to join the geographer’s guild and he decides to do this by finding the mythical Sasquatch — and gently guides it in new directions. Any pretense of observing convention is done away with by the ten-minute mark when Frost finds the Sasquatch (voiced by Zach Galifianakis, “Keeping Up with the Joneses”), whose name is Susan and then befriends him. Susan, we find out, is the last of his kind and so Frost and Susan strike up a deal. In exchange for irrefutable evidence of Susan’s existence (footprints and poop) Frost will help Susan get to the Himalayas so Susan can live with his cousins the Yetis.

It’s here that Missing Link comes into itself. The dynamic between Frost and Susan is energetic and light, the film could easily have coasted by on this alone. Instead, it does more, using the conflicting perspectives of Frost and Susan to explore the limitations of Eurocentric worldviews. While that sounds like a heavy concept for a children’s film, the script remains breezy, exploring its theme through the odd-couple comedy. Its intelligence and light-handedness here are reminiscent of early Pixar output before the studio entered its era of (mostly) mediocre sequels.

The intelligent writing is matched by the stunning visuals, and in this regard Missing Link is another home run for Laika, whose films are always a visual treat. The globe-trotting story gives the animators many locales to play with, from European plains to mid-western forests to frontier deserts to Asian mountain ranges. Not only that, but Laika continue their pattern of visual distinctiveness between films. The people and places of Missing Link look nothing like those from their previous films. It’s rewarding for the viewer and a fresh change from the monotonous “big-eyed” design of modern Disney animation.

However, for all its charm and beauty, Missing Link never manages to rise to its full potential. The film is determined to buck the trends of traditional action films, focusing more on character than spectacle. Despite this goal, an inordinate amount of the movie is dedicated to action sequences. This inherently isn’t an issue, but it’s clear that Chris Butler is neither interested nor exceptionally strong at directing action. The action sequences are slow affairs which range from generic and uninspired to downright boring. You’ve seen every action sequence here done better elsewhere.

An attempt to spice up both the character dynamic and action sequences is made with the introduction of the outrageously named Adelina Fortnight (voiced by Zoe Saldana, “Avengers: Infinity War”), however. She is a welcome addition to the story as both Butler and Saldana are fully keyed into this character. Yet she is deeply underused. With a run-time of just 94 minutes, interesting elements of the story that warrant exploring are often quickly touched on or ignored entirely. The third-act of the film (which I will not spoil) features the best visuals, set pieces, and writing and deserves its own film entirely. Yet, by the time the film reaches it, there’s simply not enough time to delve into all the opportunities presented.

For all the lamentation that exists around the length of movies, this is one that could have done with an extra 20 minutes. Missing Link has all the pieces of a subversive and entertaining genre film and yet never quite makes them all fit together properly. What we are given is still entertaining in its own right, yet you can never quite escape the sensation that it should have been just a little bit better. 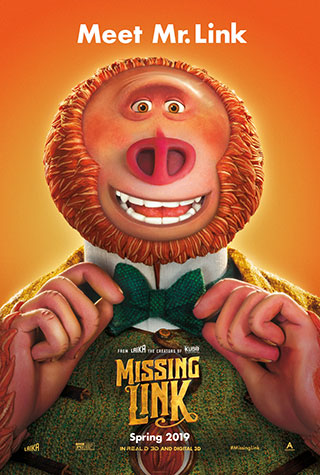