The distinction between being a monster on the inside and being a monster on the outside is clearly of great interest to the creative minds at stop-motion animation house Laika Entertainment. The dangers of oblivious parenting and morally wayward adults in general are also wells of narrative possibilities that the Laika masterminds return to often. Their worlds are truly seen through the eyes of a child, if that child is casually curious Coraline (of “Coraline”) or poltergeist pal Norman (of “ParaNorman”). So with that history and those titles in mind, it’s intriguing that Laika’s third feature is named after a group of monsters and not a child. But of course, that’s not entirely the case as Laika remains as committed to the innocent outcast as ever.

The Boxtrolls is rife with juicy thematic material that carefully links the period picture to its Laika siblings. Set entirely within the confines of an impossibly towering, teetering little European village that has adorable creatures living in its subterranean depths, the movie is once again a tale of being on the outside looking in. The ignorant townspeople living above ground have long feared the underworld monsters called Boxtrolls, mainly because a baby was thieved by the creatures one fateful night and was never seen again. The little beasties still surface at night, which has led to the implementation of a curfew and a whole lot of anti-Boxtroll sentiment.

Of course, we discover almost immediately that the Boxtrolls are sweet, loving creatures and that they fear the humans as much as the humans fear them. They seem incapable of harming anyone or anything, so it comes as no surprise to discover that the baby they ran off with during the smartly executed prologue is alive and well, raised by the Boxtrolls as one of their own. Since each Boxtroll is identified by the picture or text emblazoned on the cardboard box they wear, the now 10-year-old boy is known simply as Eggs (voiced by Isaac Hempstead Wright, “The Awakening”).

This series of first act introductions is handled with gorgeous grace by directors Graham Annable and Anthony Stacchi and writers Irena Brignull and Adam Pava, who are adapting Alan Snow’s book Here Be Monsters!. We first meet the humans and see the shadowy Boxtrolls through their eyes, then we meet the Boxtrolls on their turf and see the world from their gentle perspective, and finally settle on Eggs, who is trapped between the two worlds, belonging by blood to one and bound by love to the other.

Once we’re settled in, the story becomes both a fun, rousing adventure and a meaningful rumination on good versus evil and the mysterious masks the two sides wear. The Boxtrolls is multi-faceted that way, offering entertainment and sumptuous visuals while also scraping away at the meat on its thematic bones, coming away with plenty to chew on. The plot does become somewhat formulaic as it goes through a series of captures and escapes and an expected raising of the stakes, but this shouldn’t bother young viewers too much when there’s so much flavor to drink in from the screen. Audience members looking for more will find it in the picture’s satirical look at hierarchical struggles and the self-destructive side of the pursuit of power.

There’s even some tender commentary on the nature versus nurture debate which comes into focus when kind-hearted Eggs, raised by sewer-dwelling monsters, meets Winnie (voiced by Elle Fanning, “We Bought a Zoo”), raised by uncaring, aristocratic human parents. Winnie’s description of the ideal father, coupled with our knowledge of how the description is everything Winnie’s dad lacks and everything Eggs’ father figure Fish (voiced by Dee Bradley Baker) embodies, is especially poignant.

Between the achingly beautiful stop motion animation work and the cozily nuanced subtext, The Boxtrolls is truly impressive in its aim to not pander to any demographic or alienate another. With three movies under their belt now, it seems clear that no other current animation studio is as adept as Laika at generating a cinematic experience that can smoothly, respectfully play to audiences young and old.

The basic dichotomy of good and bad is playfully attended to here. The villain of the piece is a nasty piece of work, a supposed Boxtroll exterminator named Archibald Snatcher (voiced by Ben Kingsley, “Ender’s Game”), who greatly covets the rare white hat worn by the select few members of the town’s elite club. He sees his pursuit of the titular creatures as the key to trading in his lowly red hat for a fancy white one and this thirst for power of course threatens to be his undoing.

Archibald is the source of some particularly clever and comical bits, most notably because all he wants to do with the white hat (or perhaps all one can do) is sit around and eat the most delectable cheeses, even though he’s horribly allergic to the stuff. It doesn’t make any sense, but therein lies the fun. It’s silly enough to be funny and sharp enough to be a pointed jab at those who crave power no matter the consequences.

Kingsley delivers an ambitious voice performance for the ages here and it’s absolutely one of the most memorable vocal turns in a recent animated film. He hurls himself into the role and the animators match his slimy delivery with a character that’s grotesque at the best of times. Everything about Archibald suggests he’s the bad guy, but he’s surrounded by a trio of cronies who are under the impression that they’re on the side of good. After all, nearly everyone on screen is convinced that the Boxtrolls really are baby-eating beasts. As Archibald’s plan nears its endgame, the henchmen, employed as comic relief with extra charm, are forced to constantly reevaluate if they really are doing the right thing. It’s all another delectably direct route to one of Laika’s chief fascinations: The honesty of innocence.

It takes great creative minds to so effectively configure horror tales for children and to not defang the narrative in the process. The point isn’t to scare kids, but to enlighten them about the potential gray area between good and bad, to illuminate the dark spaces where supposed monsters reside and to suggest that monsters come in different forms. Laika is genuinely interested in pursuing these powerful themes and attitudes in a manner that appeals to all ages, through simple stories that expand in the telling to become something sweetly resonant. When brought to life with animation that can still drop jaws in this age where everything seems possible on a screen, the world of Laika and The Boxtrolls has a special sprinkling of magic that tastes richly of wisdom and wonder. 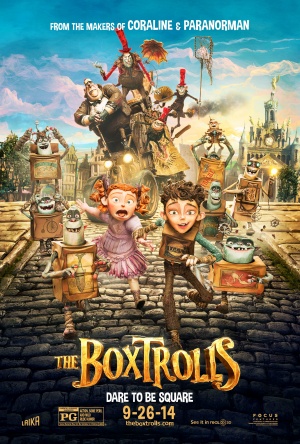