Everyone should be able to digest a charming love story, right? How can one resist an urban romancer featuring attractive lovebirds coming from different sides of the tracks, the energetic rush of city life and the unsuspecting hands of fate? Well, this is the proposed premise for director Ry Russo-Young’s (“Before I Fall”) young adult (YA) movie adaptation The Sun Is Also a Star. Unfortunately, this astrology-themed showcase of challenged love between a female cynic and male poetic spirit loses its mushy translation in the cosmos.

The Sun Is Also a Star does deserve some credit, though, for its inclusion of presentable, yet untraditional, romantic leads demonstrating relations of a different hue (in this case a Jamaican woman and Korean man). Additionally, the mentioning of immigration families and the subject matter of deportation in Trump-era America does tap into contemporary political times. Otherwise, the sketchy soapy antics of the youthful city dwellers is about as solidly structured as a melodramatic marshmallow. Tracy Oliver’s (“Girls Trip”) tepid script, adapted from Nicola Yoon’s novel, meanders while never really giving any urgency or spicy flavor to the on-screen coupling.

The story centers around the good-looking tandem of Natasha Kingsley (Yara Shahidi, “Butter”) and Daniel Bae (Charles Melton, “The Thinning: New World Order”). The set-up is temporarily adversarial but to the slightest degree. Beautiful black Natasha is an NYC high school senior that caters to scientific sensibilities so she does not have any time or patience for whimsical nonsense involving the happenstance of love and life incidentals. Handsome Asian Daniel is college-bound and would like to explore his passion for writing poetry. Soon, the twosome will be brought together by the phrase “Deus Ex Machina” (please do not bother to ask) which links them in a head-scratchingly way. Also, Daniel somehow keeps spotting Natasha around the city to the point that he believes it is his destiny to cozy up to the skeptical beauty. Their meet-up is highlighted by Daniel’s pitch to her to give him a day to win over her doubtful heart. Are there any reservations about the charismatic Daniel conquering Natasha’s skepticism of love?

Predictably, not for one second.

Although fact-finding believer Natasha and eloquent dreamer Daniel finally manage to see eye to eye while realizing their devotion to one another, the reality of their romantic union is causing a hefty wedge. Both their families are enduring hardships that threaten to impact their newly formed relationship. Natasha and her Jamaican family are illegal immigrants whose time for staying in New York is winding down by the hour as they face deportation. As for Daniel, his South Korean family has high expectations for him to study medicine; aspiring poet Daniel does not want to disappoint his folks, but he would rather read the literary pages from Walt Whitman than watch an old rerun of “Marcus Welby M.D.”

How can Natasha and Daniel overcome the obstacles that stand in their path to love? Natasha had finally let her guard down and ultimately is rewarded with finding her Mr. Right in a crowded New York City — something she initially rejected as illogical. Now her desire to be with Daniel is being jeopardized because of her immigration status. For Daniel, potentially losing the “it” girl who captured his fancy, and following his passion for prose and poetry against the wishes of his loved ones is a dilemma that feels never-ending. Will the clutter of the sun, moon or the stars get in the way of the couple’s immense yearning for each other?

I think you know the answer to that.

Nonetheless, The Sun Is Also a Star is, surprisingly, one of the better YA romantic films to not necessarily be a cookie-cutter copycat unlike some of its indigestible contemporaries. This is not, however, what one would call a ringing endorsement. The diversity of its leads and supporting players are a plus for the most part and its sweetness factor registers more often than not. Both Shahidi and Melton bring some noted conviction to the love-related leanings of their characters as they spend the day hanging out and about in the Big Apple. Still, the tripe trappings do handcuff the majority of the mawkish material and the reflective angst injected into this rote romancer is synthetically realized.

Ultimately, the astrological stars may align for the conflicted young lovers, but The Sun Is Also a Star never really manages to leave the stratosphere. 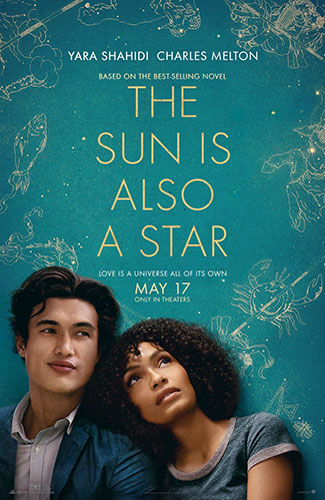