A light-hearted score by Jed Kurzel (“The Snowtown Murders”) punctuates Slow West, first-time director John Maclean’s 84-minute deconstruction of the myth of the frontier. Winner of the grand jury prize in the international dramatic competition at Sundance, the U.K.-New Zealand co-production is a slow burn that is awash in contradictions. Starring Michael Fassbender (“12 Years a Slave”) and Kodi Smit-McPhee (“Dawn of the Planet of the Apes”), Slow West is a serious look at the plight of mistreated Native Americans and the dreams of youth, a buddy picture and a road movie filled with adventure and a meaningful message, but also replete with cruelty and protracted violence and the blackest of humor, sometimes delivered at inappropriate moments.

Like Jim Jarmusch’s 1995 revisionist Western, “Dead Man,” Slow West has the quality of a dream, poetic and beautiful, almost other-worldly, yet filled with an unmistakable sadness and a desperate loneliness, the flip side of the myth of the heroic pioneer: Brave, determined, and fiercely independent. Gorgeously shot in the beautiful vistas of New Zealand by cinematographer Robbie Ryan (“Philomena”), the film is set in Colorado Territory in 1870. In the words of archaeologist Katherine Routledge, “Everywhere is the wind of heaven; round and above all are boundless sea and sky, infinite space and a great silence.” When the film opens, as a dreamy-eyed young man points his gun at a kaleidoscope of stars in the distant sky, each star seems to light up.

Only sixteen, Jay Cavendish (Smit-McPhee), has traveled from Scotland in pursuit of an idealistic romance with Rose Ross (Caren Pistorius, “The Most Fun You Can Have Dying”) who is on the run with her father John (Rory McCann, “Clash of the Titans”) after a murder in Scotland. Though to Jay she is his true love, in flashback Rose calls him a “silly boy” and condescendingly tells him that her feelings for him are similar to ones she might have for a younger brother. Nonetheless, Jay is willing to endure unknown hardships to find Rose, unaware that there is a bounty of $2,000 on her head and that of her father, a hefty sum in those days. Struggling to survive in an unfamiliar land where violence is endemic, Jay runs into Silas Selleck (Fassbender), a former bounty hunter and member of the Payne gang who offers to help him find his sweetheart for a fee.

Silas is a hard-nosed Clint Eastwood “make my day” kind of guy and, while Jay recognizes that he is a cynical brute who believes he is beyond the law, the boy is need of guidance and unconcerned about aspects of his character or any hidden motive Silas may have. When the fur-coated Payne (Ben Mendelsohn, “Black Sea”) shows up with his gang of bounty hunters, however, Jay’s eyes are opened to the possibility of treachery, reinforced when he discovers that Silas and Payne are old acquaintances. There are other vignettes that mark their journey that underscore the perils of the frontier: An illuminating scene between Jay and Werner (Andrew Robertt), a writer from Germany who is documenting the “extinction of aboriginal peoples” throughout the world; a conversation in French with Congolese singers; and a spate of dead bodies when Swedish immigrants, desperate to feed their children, repeat the only English words they know, “blanket,” “sorry,” “money,” and “please,” with the result being two orphan children.

Both Fassbender and Smit-McPhee bring a great deal of authenticity and presence to their performances. As the two bond, their attitudes undergo subtle but unmistakable changes. Seeing Jay’s fearless determination, Silas becomes softer and more protective, pondering Jay’s advice that there is more to life than survival. The scene in which Silas teaches the young man how to shave by using a sharp knife tells a lot about their relationship. Jay also grows exponentially in maturity in the strange setting where life is cheap and a misstep can end in sudden death.

Author J. R. R. Tolkien (“Lord of the Rings”) said, “From the ashes a fire shall be woken, a light from the shadows shall spring; renewed shall be blade that was broken, the crownless again shall be king.” Like many traditional Westerns, Slow West ends in an explosive shootout that takes place around a little cabin abridging a wheat field, but the ending thwarts conventional expectations and lifts the film from the ordinary to the transcendent, suggesting that not only is there more to life than survival, but that the possibility of transformation is always present. 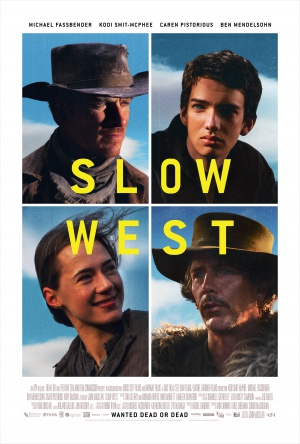