“I am convinced there will be mutual understanding among human beings . . . in spite of all the suffering, the blood, the broken glass” — Pablo Neruda, Memoirs

Based on the novel “My Abandonment” by Peter Rock and adapted from a screenplay by Granik and Anne Rosellini, Debra Granik’s Leave No Trace is the story of Will (Ben Foster, “Warcraft: The Beginning”), a troubled army veteran suffering from PTSD who lives with his teenage daughter Tom (Thomasin Harcourt McKenzie, “The Hobbit: The Battle of the Five Armies”) in a camp they built themselves in the woods near Portland, Oregon. Like Granik’s 2010 film “Winter’s Bone” that chronicled the lives of people living on the margins in the rural Ozarks of Missouri, Leave No Trace is an uncompromising look at a non-conforming father and his young daughter living off the grid, doing their best to survive in a society they do not understand or wish to be a part of.

Opening in a heavily forested area in a large public park, cinematographer Michael McDonough (“Albert Nobbs”) creates a mood of isolation far removed from the world of television, computers, and smart phones. Will and daughter Tom, remarkably performed by McKenzie, chop wood, play chess, cook their own meals, and train themselves to avoid being detected. There are no flashbacks and little backstory and it is left to us to guess how long they have lived there, what Will’s military trauma was like, or what happened to Tom’s mother. What is certain, however, is that they are not on a summer vacation. When they go into the city for groceries, the sudden contrast between the forest and the shrieking sounds of city life is instantly jarring. Buying groceries, however, is not all Will has come for.

Visiting the VA hospital, he picks up prescriptions for painkillers which he sells for cash to hangers on living on the outskirts of the park. It is his only means of support. His independent way of life is threatened, however, when Tom is inadvertently seen by a passing jogger who alerts the authorities and they are forced out of hiding by the police and their sniffing dogs. Separated, Tom is sent to a detention center for young girls, while Will must take a series of psychological tests in a VA facility where he has to confront thoughts and feelings that he had long suppressed. Before being torn apart, Will reassures his daughter that “we can still have our own thoughts,” but it is unconvincing.

Though they are being “processed” and are, in effect, beholden to the system, Granik avoids the kind of scapegoating depicted in films such as the recent “I, Daniel Blake,” which shows all government workers as ogres. Here they are real people who treat Will and Tom with respect and a grudging admiration. Rather than showing the effects of a society in freefall, Granik makes us aware that there is still kindness left in the world. Father and daughter are eventually reunited on a farm where Will helps the owner Mr. Walters (Jeff Kober, “Sully”) harvest Christmas trees.

As they settle into their new environment, Tom learns how to ride a bike, Dale (Dale Dickey, “Hell or High Water”), a local woman, shows her how to approach a bee hive safely, they attend a church service, and Tom meets a young boy (Isaiah Stone, “American Honey”) who invites her to a 4-H meeting where they are taught to train rabbits. Though she is beginning to like it, Will is becoming increasingly uncomfortable with living in a community that requires him to give of himself to others. Still disturbed by night terrors, the look on his face suggests that he is just biding his time until he can return to the woods.

Fueled by the atmospheric original score of Dickon Hinchliffe (“Out of the Furnace”), Leave No Trace unfolds without indulging in sentimentality. Unlike last year’s “Captain Fantastic” which romanticized living outside of “the system,” it is less of a statement about escaping from a system that one deems oppressive than about a man who has found a way to cope but is psychologically closed off from others, unable or unwilling to engage in the demands of accepted social interaction.

Leave No Trace does not exploit its characters or engage in “us against the world” messaging but reveals its inner truths with restraint and authenticity. Though we can empathize with Will and Tom, we know that the universe is governed by impermanence and that eventually we all have to let go of our attachments. To quote philosopher Henri Bergson, “To exist is to change, to change is to mature, to mature is to go on creating oneself endlessly.” Leave No Trace is not only a film about survival, but also about the power of self creation. 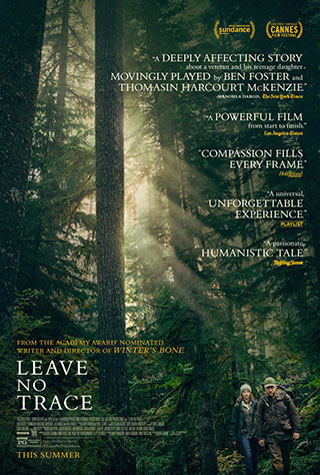