Brazilian director Fernando Meirelles’ (“The Constant Gardener”) The Two Popes is not only a master class in acting, but a film that sends a strong message that people who disagree and do not even like each other can learn to listen. Written by Anthony McCarten (“Bohemian Rhapsody”) and beautifully shot in Argentina and Italy by cinematographer César Charlone (“American Made”), the film is an account of the relationship between the ultra-conservative Pope Benedict XVI (Anthony Hopkins, “Noah”) and the liberal Argentine cardinal Jorge Mario Bergoglio (Jonathan Pryce, “The Man Who Killed Don Quixote”), the future Pope Francis. Despite their flaws, Meirelles humanizes the two men, showing that, whatever their past mistakes may have been, they can meet on common ground.

Although their conversations are fictional (we do not know if in fact they ever met), according to Meirelles, “the lines were taken from interviews or books.” Whether true or not and I have no reason to doubt it, the dialogue has such a feeling of authenticity that we do not question that it is coming from a deep place inside the two men. The film opens on a humorous note when Bergoglio attempts to order a plane ticket on his smart phone, but his unfamiliarity with the device leads the airline representative to think that it is a prank call and hangs up on him. We then flashback to 2005 and the death of Pope John Paul II, a beloved figure in the church for 26 years, followed by the accession of John Ratzinger as Pope Benedict XVI, a man dedicated to upholding traditional Catholic theories and practices.

Since Bergoglio had submitted several requests to resign from his duties as cardinal, he is now summoned to the Vatican where the new pope explains that his resignation would be interpreted as a rejection of his own leadership and he refuses to consider it, deflecting and distracting at every opportunity. As the two men share opinions about the state of the Catholic Church (using several languages that include Latin, Italian and Spanish), Benedict struggles to understand the Argentinean’s point of view and, at one point, exclaims, “I disagree with everything you’ve said!” though the conversation continues without rancor. It is a discussion that is revealing and even inspiring.

The centerpiece of The Two Popes is the sudden resignation of Pope Benedict in 2013, the first pope to voluntarily vacate his office since Pope Gregory XII relinquished his title as a result of factionalism in the church in 1415, known to history as “The Great Western Schism.” The 85-year-old Benedict’s resignation is attributed to old age and failing health, yet may have also been related to the accusations of priests’ inappropriate relationships with altar boys and the VatiLeaks scandal, in which the Pope’s butler, Paolo Gabriele, had leaked confidential documents exposing Vatican power struggles. While the issue of abuse by priests is brought up by Benedict, it is not dwelt on and the pontiff’s remarks on the issue are muted, perhaps a questionable decision.

To highlight their differences in a lighthearted way, we find out that Bergoglio likes ABBA, a Swedish pop group, especially their song “Dancing Queen,” while Benedict prefers classical piano and the Austrian TV program “Kommissar Rex,” which I guess means that he likes dogs and cops. Differences aside, with the retiring pope’s support, Bergoglio is elected as Pope Francis in 2013 and his address to the gathered throng in St. Peter’s Square demonstrates his warmth, humility, and commitment to social justice. As they eat pizza together, however, both men are open about real or perceived past transgressions. Pope Francis is still looked upon with disdain by some in Argentina because of his role in not doing enough to oppose the military junta during the country’s “Dirty War” in the 1970s.

At this point, the film flashes back to Argentina in the 70s when the young Bergoglio (Juan Minujin, “Zama”) refuses to take a stand when his fellow priests are arrested and tortured by the military dictatorship. Similarly, Benedict is haunted by his decision to join the Nazi Party in the 1930s, a fact he is constantly reminded of. While The Two Popes has been touted as an in-depth conversation between two esteemed men of the church, a promotion that does not sound very promising, given the quality of the performances and the overall production, the film is surprisingly entertaining and quite moving. Though its focus is on the church, it has a universal appeal. According to the director, “Tolerance is a commodity that we’re missing.” It is a message that is very relevant for our time. 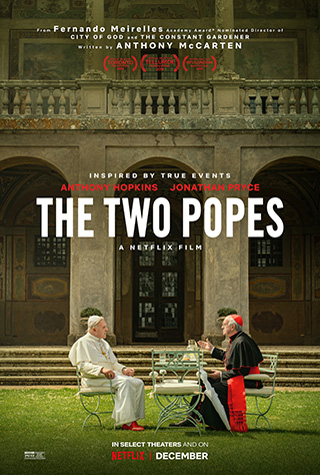