The specter of 90s cinematic cool looms over every frame of Killing Gunther, a darkly comic mockumentary action movie about goofball criminals that kill for laughs. It’s like a lost relic from a time when everyone wanted to rip off Tarantino and when the fake documentary approach still felt fresh. It also semi-stars Arnold Schwarzenegger (“Terminator Genisys”), a massive icon of 90s cinema that has generally failed in his bid to become relevant again with his post-politics return to the screen.

To be fair, Schwarzenegger’s few scenes late into the movie are far and away the best part of Killing Gunther, wherein he plays the titular hitman that is considered the best of the best among professional assassins. Schwarzenegger gets a few fun opportunities to trot out his trademark comic timing and his natural charisma remains a rippling force, instantly lending the movie the exaggerated tone it otherwise hopelessly aims for throughout its mercifully short running time of 92 minutes.

But despite the title and the general sense of a ubiquitous presence that his character has in the movie, Schwarzenegger is rarely onscreen in the film, which is instead focused on the hapless efforts of a team that has been assembled for the sole purpose of murdering Gunther in the name of occupational glory.

The team is led by Blake (Taran Killam, “Teenage Mutant Ninja Turtles,” who also produced, wrote, and directed the movie), an emotional, anxiety-ridden hitman still reeling from a breakup with Lisa (Killam’s real-life wife Cobie Smulders, “Literally, Right Before Aaron”), who once had a brief relationship with Gunther. Blake’s beef with his ex’s ex makes this a rather personal vendetta and the movie mines humor from his increasingly frequent meltdowns as Gunther outsmarts him at every turn.

Blake is so excited and invigorated by his plan to take down Gunther that he hires a small film crew to document the mission, thus resulting in the movie that we’re watching. This allows characters to talk directly to the camera in their mock interviews, fostering further gags, but Killam tends to use the approach in a clumsy, meandering manner.

There’s nothing new or interesting about its use here and the jokes get old in a hurry when the method of telling them remains so stubbornly static. Killam desperately wants his movie to be riotously funny, but the big effort pays poor dividends. It always feels like he and most of his costars are trying far too hard with far too few of the jokes actually hitting their target.

It’s only the arrival of Schwarzenegger that eases the feeling of forced comedy, so it’s a shame that he shows up so late into the story. To be fair, the rest of the cast isn’t exactly light on comedic experience, since Killam is joined by sitcom star Hannah Simone (“New Girl” TV series) and “Saturday Night Live” alums Bobby Moynihan and Paul Brittain, among others. The problem is more that the gags are pitifully stale.

Killing Gunther is a graveyard of once-novel ideas, now rehashed and reheated so many times that they’ve lost their flavor entirely. The whole thing is certainly silly enough to ensure that no one is going to take it seriously from any angle, which sort of barricades the barrage of ridiculousness against any criticisms beyond, well, accusing the movie of being dumb and silly. It could use more imagination and more originality, but that’s true of countless movies. And therein lies the problem: Killing Gunther is just another face in the cinematic crowd of wisecracking killers, practically indistinguishable from the rest. 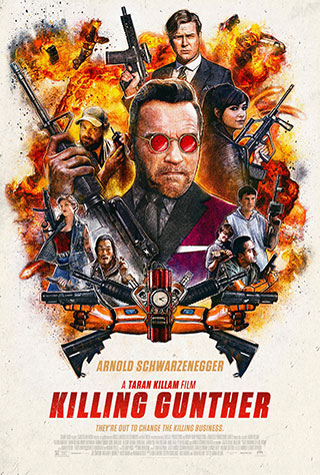