School teacher Gemma (Imogen Poots, “I Kill Giants”) and gardener, Tom (Jesse Eisenberg, “Batman v Superman: Dawn of Justice”) are a young, contented couple looking to settle down and buy their first home. While out driving one afternoon they happen upon a showroom with a strange display of model houses, overseen by an eccentric man named Martin (Jonathan Aris, “The Death of Stalin”). It’s clear that Tom has no interest in pursuing this further but Gemma tells him, “its worth a look” and so they promptly follow Martin in their car for a viewing. Arriving at Yonder, the housing estate which declares, “You’re Home Right Now” we see lines of neat and identical looking houses. Everything seems perfect, too perfect in fact. The rows of endless houses are uniform both inside and out with the area having an aura of staleness about it and we’ve spent enough time with Tom and Gemma to know this is far from what their ideal dwelling. However, before they can politely decline, they notice that Martin has disappeared.

It soon becomes apparent that Gemma and Tom are stuck in Yonder for good, but the arrival of a baby in a cardboard box labelled “raise the child and you will be released” offers the potential promise of a way out. The child in question, however, described by Tom as “a creepy mutant” has more than a touch of sinisterism as he mimics the couple’s interactions with one another, is emotionally detached and seems to favor letting out ear piercing screams — particularly at breakfast time.

A brooding and somewhat nihilistic rumination on the futility of life, the close influences of Vivarium are the great science fiction writers, John Wyndham and Philip K. Dick who gave us works such as The Day of The Triffids and Do Androids Dream of Electric Sheep? The theme of ambiguous corporations is also heavily explored in the science fiction genre and similarly here, the threat of an unknown authority assuming control of all aspects of human life without sharing motive or reason feels omnipresent.

With its post-apocalyptic style setting, fear is evoked not through jump scares or monsters but through the isolation and loneliness that Tom and Gemma experience; a clear meditation on modern day anxieties that many of us harbor when it comes to suburban living. The food is “tasteless,” the streets are lifeless and there is nothing to do but let time tick away. While the couple start off spending time together, determined to break free from the dystopian maze of houses by holding hands and making love, this quickly becomes fragmented. Tom soon begins to leave the breakfast table prematurely each morning in order to resume digging a hole in the garden that he is convinced will lead to a way out and we watch as the intimacy in this previously loving relationship begins to deteriorate

As the distance between Gemma and Tom widens, we find that she gravitates closer towards the baby, which has now evolved into a boy, in an effort to learn more about this unearthly seeming being, calling him “a mystery.” Tom however, develops a quick and firm disliking to the new addition (who remains nameless throughout) and one of the film’s most tense moments comes when he and Gemma disagree over whether they should continue to care for him or relinquish their responsibilities in the hope that this might trigger a positive change in their circumstances. The feeling of fate closing in on the couple is also expressed visually as seen when Tom lies down to sleep in the hole he is digging and Gemma next to the boy with both the ladder and the bed acting as bars. Imprisoned in their situation literally (for they cannot get out of Yonder either by car or on foot) and metaphorically (as shown through the imagery), there is throughout a looming air of doom.

Vivarium succeeds in solidifying an early empathy for the two central characters through their genuine chemistry in the opening scenes which are — in contrast to their time in Yonder — brightly lit. The sense of hope and connection that exists in their relationship enhances the loss we will later feel as their optimism slowly drains away. This is beautifully and poignantly conveyed during a scene when they play their car radio loudly whilst dancing in the street in a moment that embodies their freedom and oneness. As the young boy, the performance of Senan Jennings (“Royally Ever After”) is so disturbing you cannot bear to look and yet so compelling that you feel his magnetism onscreen with definite echoes of Martin Stephens turn in “The Village of the Damned.”

Director Lorcan Finnegan paces the film really well, both allowing us to feel the monotony and frustration that Gemma and Tom feel while also drip feeding us with enough plot development to feel as though things are moving along. Vivarium has a cold and lifeless aesthetic which works in tandem with the removal of any joy that Tom and Gemma experienced before arriving at Yonder as we watch the life being literally sucked out of them. The sky, which is filled with perfect “cloud shaped clouds” as Gemma remarks, feels reminiscent of Marguerite’s paintings, lending a direct and fitting reference to surrealism — a style that pervades the entire film. What Finnegan gives us is a suburban nightmare which builds on all aspects of fear, from those which we can all recognize and identify with (ever been wondering lost somewhere only to realize you were back were you started?) to the hallucinogenic and unfathomable. 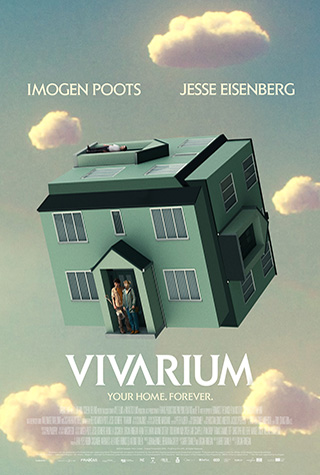