Poor Nancy, life is a drudge without any hope of things ever picking up; an aspiring writer who receives endless rejection letters she is also a loner yearning for human contact who can only find company in the form of her trusty ginger cat (the ironically human named) Paul. Nancy is in a rut, both personally and professionally and the bare emptiness of her existence is conveyed through the washed-out tones as we wait, willing for something good to come into her world. In her state of perpetual loneliness, Nancy finds herself posing as alternate versions of herself online in order to make emotional connections with others. She starts off small but then, seeing a television advert featuring an ageing couple who are renewing their appeal for their daughter 30 years later, she is led to believe she could be the missing piece in their lives. As events unfold, Nancy and the couple learn that the truth is sometimes a unique convergence of fact and fiction.

Identity and the human desire to spend time with and feel that you are needed by others is what Nancy (a thoughtful directorial debut by Christina Choe) is all about. Nancy herself (played with a beautiful combination of strength and fragility by Andrea Riseborough, “The Death of Stalin”) is uncertain of who she is on not only a biological level but on a deeper more personal footing which is communicated through the sense that she is not at all comfortable in her own body. Her home life involves caring for a parent with a debilitating illness (Ann Dowd, “Hereditary”) who in return, disrespects Nancy’s privacy by opening her mail and hurling a cacophony of insults and verbal aggression towards her. As we witness Nancy scarper into the safety of her car to open a letter that has fortunately escaped interception, we see the front is marked with the emblem of a publishing house. We take a sharp, deep in-breath in tandem with her whilst screwing our eyes tightly, hoping and wishing that this will be her ticket out of a miserable existence. Her subsequent rejection marks a shift in our expectations as much as it does in the narrative as we watch to find out what this last little push towards the edge will do to our protagonist.

This in fact becomes the catalyst towards Nancy faking a pregnancy in order to meet up with a man (John Leguizamo, “The Sun Is Also a Star”) who makes contact via her writing blog. However, any sense of disingenuity on Nancy’s part is negated by the knowledge that what she is really doing is reaching out in an attempt to make a connection with someone. The interaction doesn’t go as planned and it isn’t long before Nancy finds herself back at home with her demanding parent who soon passes away (not unwantedly), leaving her with a lonely couch otherwise only populated by her cat Paul. The second and most integral development then occurs as Leo and Ellen Lynch, two grief-stricken parents, make a renewed appeal for their daughter Brooke who we discover, went missing 30 years ago. Recognizing that the photo fit of how Brooke is expected to look now bares a striking resemblance to her own appearance, Nancy is filled with a new purpose. Like many moments in the film (which is one of its key strengths) Choe chooses to show rather than tell us what is happening which gives a wash of ambiguity to proceedings that doesn’t feel dissatisfying but rather, it serves to fuel the idea that there are multiple explanations to what is taking place. Here, we see the film’s most thematic and engaging image that represents the epitome of what Choe is delving into so well that it became the film’s poster as Nancy compares one half of her own face to a torn off half of Brooke’s. As she looks in the mirror, the image thus made more duplicitous and segmented, there’s a sadness in the realization that the happier, warmer and more appealing half belongs to the manufactured image and not the living human stood before us.

Nancy makes the daunting call which ends up catapulting her into the lives of the Lynch family. Ellen and Leo (played with a believable combination of suspicion and hope by J. Smith-Cameron, “Margaret” and Steve Buscemi, “The Incredible Burt Wonderstone”) welcome Nancy into their home and they begin the process of getting acquainted. Although ultimately, they are united and convey an utterly convincing portrait of a loving marriage, husband and wife have different approaches to testing if their new house guest is in fact their long-lost daughter. Whereas Ellen appears to favor following her instincts reacting with her heart (but notably, never totally loosing her head), Leo instantly favors a methodical, evidence-based approach enlisting a private investigator to interview Nancy and take saliva samples. These responses often meet in the middle and from time to time create conflict but never to the jeopardy of the relationship.

In the interim few days as they await the DNA results, the three spend time together trying to forge bonds, with Ellen (a Professor of Comparative Literature) learning that Nancy too is a writer, a fact that propels her belief that they are biologically related. The cozy warmth of the indoors is juxtaposed with the biting cold of the snow outside which covers the landscape. Notably, Nancy is more drawn to and is able to spend more time in the outdoors than the Lynch’s, hinting perhaps at something unresolved in her character. Through the use of repeated references to hunting, Choe gives the impression that time is closing in on Nancy before the impending results reveal the truth. In a horrifying moment, Nancy’s loses the most precious thing she has as Paul disappears into the woods. In an attempt to soothe her, Ellen and Leo repeatedly advise that the cat will return which eventually he does, an occurrence which seems to have a message buried of hope buried within it.

At its heart, the film covers a range of deeply powerful and effecting themes which persuade us to challenge assumptions of what we believe (or wish to be true) and the truth that belongs to the reality of our situation in the present moment. Nancy is also an exploration of what it means to be human and the importance of being connected with others and sharing in a sense of self-worth. 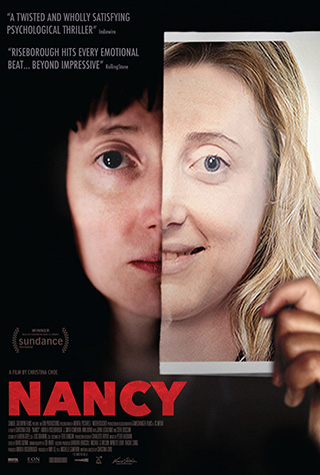