From the opening frame to its final musical note, When Marnie Was There evokes bittersweet recall of childhood memories; a love-letter to breezy seaside holidays, passionate yet fleeting friendships, and the anxiety of growing into an adult world.

Animation studio Studio Ghibli almost seems to have selected these themes to reflect their own farewell. In 2014, legendary director Hayao Miyazaki announced his retirement, admitting that the outlook for the studio’s future productions, particularly features, was uncertain. At that time, When Marnie Was There was the last film in the pipeline and, as of today, nothing else is scheduled to replace it.

That Ghibli could be closing its magical doors forever is very sad. From “My Neighbor Totoro” to “Princess Mononoke,” from “Spirited Away” to “Arrietty,” the studio has stimulated fantastical imaginations in children and adults alike for three decades. It’s name is synonymous with animation-as-art; every meticulous brushstroke designed to enhance their soul-stroking brand of storytelling. Adapted from British author Joan G. Robinson’s novel, When Marnie Was There is sketched with the same quill as the rest Ghibli canon, but with a less overtly magical slant.

City dwelling Anna is a shy 12-year-old girl, struggling physically with asthma and socially with her peers. Thoughtful, she would prefer to spend time drawing in a sketchpad than gossip about boys. However, this reclusion is causing increasing isolation and a melancholic malaise bordering on depression. Concerned for her health, Anna’s foster mother decides she should spend the summer with family friends in the seaside town of Hokkaido, a place of clean air, country living, and peace.

Given free roam of the quiet little town, Anna wanders in solitude, dutifully documenting the buildings and scenery in her sketchbook. One house in particular catches her eye: A large mansion, accessible only by boat and set apart on the far side of the cove. Rumors of ghosts and hauntings don’t deter, and one moonlit evening Anna crosses the estuary and finds another girl waiting in the front garden: Marnie. She’s the same age, has the same vulnerabilities, and the same yearning for acceptance.

Their blossoming friendship forms the crux of the story, but the film’s real journey is an emotional one: A study of childhood introversion and happiness. Like many children her age, Anna becomes anxious at parties, has difficulty communicating unless it’s on a one-to-one basis, and internalizes all her thoughts and emotions. What she’s needed all along is a companion to share these struggles with. Now she has Marnie (and us) for comfort.

Before deciding to watch the film, the viewer should prepare for slow-burning sentimentality. Don’t try to over-think the movie or unfurl the plot. Dial brain-functions down to 1, empathy-levels up to 10, and feel the film’s life-lessons wash over you. When Marnie Was There is a meditation on loneliness, identity, and self-esteem. It’s pacing is very level, and if critical, can at times verge on flat. There aren’t many events to push the plot into higher gears, and (particularly in the second act) this can feel a little boring. There are virtually no malicious characters to fear and the only antagonist to prevent her success is really Anna herself. Yet despite the meandering story, the end payoff provides a heartwarming insight into childhood that will leave few dry-eyes in the audience. When Marnie Was There is a film of atmosphere, empathy, and sentimentality, with Ghibli’s customary care for design dripping off the screen with every frame.

The volume and levels of intricate detail could satisfy wandering eyes for hours; minor background objects and vistas sit like artworks in their own right. The sound-designers seem to have amalgamated every individual nostalgic beach holiday together into one warm auditory retrospection. You can practically feel the thousands of hours of work from these master artists, at the top of their game, rushing out of the projector. If When Marnie Was There is indeed the final film in their great history, it’s a fitting sendoff that will leave animation lovers the world-over remembering “When Studio Ghibli Was There.”

'Movie Review: When Marnie Was There (2015)' has no comments 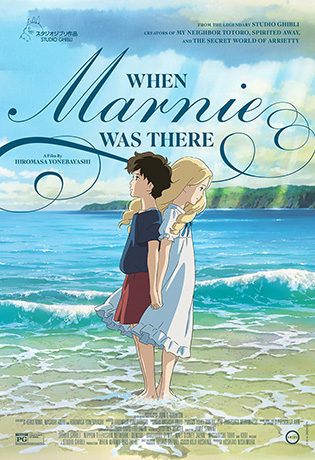