Weiner, a documentary about the 2013 New York City mayoral campaign of Anthony Weiner, is very funny and very painful. It’s also one of the most engaging and insightful political movies I’ve seen. Co-directors Elyse Steinberg and former Weiner chief of staff Josh Kriegman were given extraordinary access to Anthony Weiner as he attempted to re-ignite his political career after a humiliating sexting scandal forced him to resign from Congress in 2011. And if you were alive in the summer of 2013, you know how badly Weiner’s mayoral campaign failed. But that’s old news, and the filmmakers are less interested in dredging up the salacious details of Weiner’s epic fail, than in showing us what we may have missed during the media firestorm of moralizing punditry and dick jokes. Weiner is a brilliant depiction of the very private impact contemporary media have on those in the public eye and a portrait of a decent, but flawed man who just desperately needs attention.

The film opens with an entertaining montage of Anthony Weiner as firebrand Congressman — the progressive left’s answer to the Tea Party. Weiner is charismatic and commanding in these clips and it’s obvious why people are drawn to him, despite his brashness and combative nature. That opening montage also showcases the other side of Anthony Weiner and the dick-pics that led to his first run-in with media sensationalism and ultimately to his resignation from Congress. What’s especially insightful in this early sequence is how the filmmakers show us the same media that crucified Weiner were originally so invested in portraying him as the Democratic Party’s savior. The media giveth and the media taketh away.

The story picks up two years after that initial humiliation as Anthony Weiner makes the decision to return to political life by running for Mayor of New York City. Weiner has reconciled his marriage and publicly announced that his ‘addictions’ are in the past. This comeback is presumably the story the filmmakers originally set out to document and the possibility of a comeback is initially very promising. Weiner’s charisma, drive, and persuasive skills are obvious as he canvasses and builds his campaign from the ground up. Weiner is accessible and connects with people in an honest way that inspires his constituents who have moved on from Weiner’s past discretions and are looking for someone to fight for them, and Weiner is up for the fight. We meet Weiner’s dedicated staff and volunteers that couldn’t care less about the sexting, but follow him for his passion and progressive policies. One young volunteer confesses that his mother was aghast at the idea of him serving such a ‘disgusting’ man, but when the young volunteer asked, “What about Bill Clinton?,” his mother replied, “No, Bill’s different.” We also meet Weiner’s wife, Huma Abedin, the mesmerizingly beautiful and politically savvy former aide to Hillary Clinton. All these details are relegated to the background, however, once news of Weiner’s ‘perpetually horny’ alter ego Carlos Danger breaks.

It’s at this point that the documentary reveals itself as an agonizing examination of a campaign, and a man, and a marriage, as they all lose control of their carefully constructed narratives. While Weiner tries to maintain his campaign and focus on the issues, he’s pulled down into a media nightmare. The filmmakers don’t avoid the jokes, but they also don’t shy way from depicting the tremendous emotional toll suffered by everyone involved. His campaign staff feels betrayed. Huma is publicly humiliated. And Weiner has to face the people who trusted him and the public that thinks he’s worse than Hitler. On top of the inescapable public attention, they all have to deal with those damn cameras capturing every private moment!

The documentary captures everything. The filmmakers had unrestricted access to Weiner, in his home, in his office, and on the campaign trail. I’m sure Huma and his campaign staff wishes the cameras hadn’t been there. I’m not so sure Weiner would wish the same. At one point late in the movie, Josh Kriegman asks Weiner from behind the camera, “Why did you let me shoot this?” That question is central to understanding Anthony Weiner and his insatiable need to be seen and heard. While Weiner constantly rants about the media’s love of oversimplification and disdain for nuance, he also thrives on the media attention he receives; even at it’s worst.

Weiner makes an appearance on Lawrence O’Donnell’s MSNBC show at the height of the Carlos Danger scandal, and unable to swallow his pride he engages O’Donnell in a disastrous and childish bout of name-calling. The next day he can’t stop watching the clip online and he even drags Huma in to watch his MSNBC meltdown. Huma calls this obsession ‘crazy’ and she can’t get away fast enough. Later, while trying to reclaim his campaign and being trailed by dozens of cameras and reporters, Weiner gets into a heated argument at a deli with a random citizen, which devolves into threats and insults. A spectator comments to the documentarians, “Why didn’t he just walk away?” Watching all this unfold, you’re just waiting for someone close to Weiner to give him the same advice. But as Weiner himself confesses, “Politicians are wired to need attention, which makes it hard to have normal relationships.” It’s this desperate need for attention, more than the sexting, which is Weiner’s tragic flaw.

Weiner reminded me of 1993’s “The War Room” — Chris Hegedus and D.A. Pennebaker’s great documentary of Bill Clinton’s 1992 presidential campaign. Like Weiner, it stumbled into a promising, underdog campaign dealing with the collateral damage of its candidate’s sexual discretions. Unlike Weiner’s campaign, however, Bill Clinton and his campaign staff were able to rise above the scandals because they weren’t running in a 24-hour, relentless, media-saturated environment that turns the personal into spectacle and the audience into executioners. While Anthony Weiner isn’t the most sympathetic character — he did lie, after all, and often — he is compelling, complicated, and painfully vulnerable. Weiner is about that man’s downfall, but it’s also an indictment of the media and the public’s toxic relationship with celebrity. 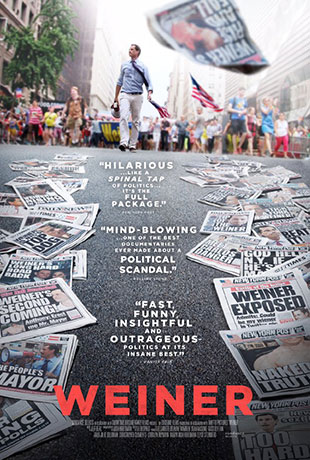