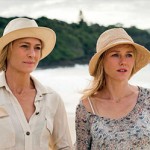 Early in 2013, a small film, Adore, based on the novella “The Grandmothers” by Doris Lessing played at the Sundance Film Festival. It screened in limited release in the US in September, and then quietly went to DVD. The film takes on an uncomfortable story of two grown women — the best of childhood friends — who engage in semi-incestuous affairs with each other’s sons. It’s probably for the best that this one slipped under the radar, as it doesn’t leave much of an impression beyond the same queasy feeling that comes from reading the blurb describing its subject matter.

Adore begins with some establishing scene work between two best friends in their adolescence. Roz and Lil are clearly inseparable pals who live by the shore and are blissfully happy in their simple, picturesque homes by the sea. As adults, they’ve remained in these homes and now each have son in their late teens/early twenties. Roz (Robin Wright) is married to Harold (Ben Mendelsohn) and they share their home with their son, Tom (James Frecheville); Lil (Naomi Watts) recently lost her husband and grieves his death with her son, Ian (Xavier Samuel).

The film focuses at first on the super-close friendship between Roz and Lil, and then on the corresponding friendship between Ian and Tom. These four are the central characters in the film, and any secondary characters to the film are also secondary in the stories of their lives. Roz and Harold’s relationship is strained, as he feels she is on loan to him rather than being his full-time wife. He has just accepted a job in Sydney and wants to move the family there; Roz is skeptical and hesitant. Lil, meanwhile, is being courted by Saul (Gary Sweet), but doesn’t share his feelings, and is shocked when he accuses her of a relationship closer than friendship with Roz. This similar accusation comes from Harold, who thinks Roz prefers Lil to him and their marriage. Tom and Ian spend their days surfing and swimming, carefree young men who are likened to young gods by their mothers. Clearly, this is a relationship born of the closeness their mothers have shared since their early teens. Indeed, the four are a close-knit group, sharing laughs, dances, wine, and conversations women typically have on girls’ night, when the boys (sons, at that) are DEFINITELY nowhere to be found. Yet, both sons remain, comfortably discussing topics that would make most sons cringe and scurry away. (Some of these topics certainly make viewers cringe to think of the possibility of similar conversations with our own mothers.)

One late night, Lil leaves to sleep in her own bed and Ian remains behind at Tom’s house. Ian makes the first move on Roz, whose husband is away in Sydney, preparing for their move and his new job. At first, the intimacy is hesitant, but soon, both are fully engaged. Tom wakes with a hangover and goes into the kitchen for a drink, spying his mother leaving Ian’s room with her jeans in hand. Furious, he leaves the house, and goes to the water for some solace; in the morning, he wakes on the beach and determinedly walks to Lil’s house, where he lets himself in. They talk innocently for a while before Tom kisses Lil. When she protests, he reveals what’s happened between Roz and Ian. It appears that both boys have been harboring feelings for each other’s mother, and now that Ian has acted on his, Tom is inclined to do the same. At first, Lil is appalled by the suggestion, but gives in to her own feelings of attraction to the boy who might as well be her own son.

The movie examines the emotional difficulty of such arrangements between two sets of close friends and between the lovers themselves. Once both pairs decide to engage in these scandalous affairs, the foursome become a metaphorical island, similar to the floating dock on which they spend hours upon hours lounging in the water. There is an inordinate amount of time spent on actors/actresses looking wistfully, pensively out into nothing while dealing with their feelings about their various interactions. Of course, relationships such as these cannot carry on forever, so there are more secondary characters brought into the picture, such as actress Mary (Jessica Tovey) for Tom and her friend Hannah (Sophie Lowe) for Ian. As expected, their existence complicates the relationships among the four central characters, and Adore shifts to focus on how they attempt to move on with their lives in an increasingly stagnant situation. 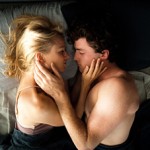 Robin Wright plays her role with strength, yet it often comes across as cold and unemotional. Roz is the “sensible” one, trying to make the “right” decisions, while Naomi Watts’s Lil is more of a girl-woman who has allowed her feelings to rule her life. She is more emotional, teary-eyed during many scenes in which Roz comforts her and tries to convince her that they have to be more responsible — basically, act more like the grown women they are. The boys are clearly their mothers’ sons, as Tom is more subdued, while Ian is more passionate about his feelings for Roz. Tom drifts back and forth; Ian fights for his relationship with Roz against her insistence that they should remain apart.

The problem with this film isn’t that you don’t believe their feelings for each other; it’s that you don’t really care all that much about them. Adore is more about melodramatic interactions and situations than it is about the effect these affairs have on their lives. These decisions really don’t seem to impact them at all; Roz, Lil, Ian, and Tom prefer to be isolated with each other, and the story gives them that. You hope for more intensity from a film that tackles a subject like this, but it just turns out to be a basic story of forbidden love with minimal guilt or consideration for those who are hurt by it. It’s not a terrible film, but it’s just not very engaging, either. Instead, like its various secondary characters, Adore drifts away with the tide, easily forgotten.