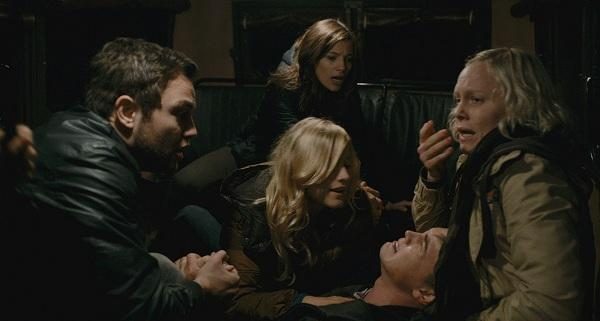 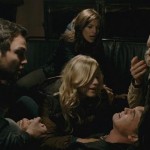 It was considerate that director Bradley Parker (a visual technician in films such as “Lake Placid” and “Fight Club“) followed a similar path as “Cabin in the Woods” director Drew Goddard did in turning the old teenage slasher/horror/mutant genre on its head with Chernobyl Diaries.

However, while Goddard and company opted for an intricate, multi-layered story that focused on real scares, scientific research and supernatural, otherworldly occurrences; Parker, in his debut, just went for the laughs.

Unfortunately, the humor was quite unintentional.

With a plot that borrows (actually, that’s too soft a word, steals is more like it) heavily from “Cloverfield,” “I Am Legend,” “28 Days Later” and “The Grey,” among others, screenwriters Shane and Carey Van Dyke (“Titanic II,” “The Day the Earth Stopped“) have crafted a motion picture that features none of the intrinsic interest or competence of any of these films.

That’s not the half of it, as the acting — by such individuals as Jonathan Sadowski (“The Goods: Live Hard, Sell Hard“), Jesse McCarthy (who looks more like Leonardo DiCaprio than Leonardo DiCaprio, “Alvin and the Chipmunks: Chipwrecked“), Nathan Phillips (“Snakes On a Plane“), Devin Kelley (“Covert Affairs” TV series), Olivia Dudley (“Chillerama“) and Norwegian actress (term used quite loosely) Ingrid Bolsø Berdal — gives community theater a bad name. A very bad name.

Might as well get to the plot, I suppose. For some reason, Chris (McCarthy) wants to take his fiancée, Natalie (Dudley), to Moscow to propose. In this endeavor, he drags along Amanda (Kelley), but stops off in Keiv to visit his brother, Paul (Sandowski). But instead of proceeding from there to Moscow, though, Paul inserts a plot convenience device which persuades the group to stop by a town vacated 25 years before by the Chernobyl nuclear disaster. On this trip, they are joined by two other goof-balls, Michael (Phillips) and Zoe (Berdal).

It’s a very dumb idea, but, hey, Chernobyl Diaries already had a title, so everyone had to go with it. Driven to the location by gruff former Soviet military man and travel agent, Uri (Dimitri Diatchenko, “Get Smart” and easily the most competent member of this cast), things begin to go south quickly when the moronic clan is attacked by radiated bears, dogs, fish and unseen vehicular vandals. 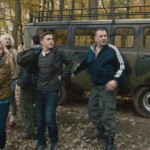 Should have stayed in the bus.

Of course, they sink even deeper into despair and disaster when wild, feral beasts become the least of their problems (and that doesn’t even include a script that turns into Cliché Central or situations that caused the preview audience to howl with laughter).

Yes, not just tentative giggles here and there, but outright guffaws; which, I can assure you, is not a good sign for a so-called horror movie.

And while I joined my peers on many occasions, I did have higher hopes when Chernobyl Diaries began. I appreciated the early look when Uri drives the group through the creepy, empty streets of the city which was vacated with little or no warning to the inhabitants. The scenes of the abandoned buildings, apartments and amusement parks were especially effective, as was the first dog attack sequence.

After that, however, you’ll do better to slip into another theater, maybe one showing “Battleship” or “The Five-Year Engagement” or “What to Expect When You’re Expecting.” None of these movies are any better, but they’re certainly more entertaining in their respective ways. 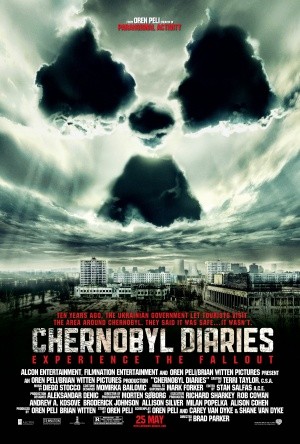