Can there be anything wrong with the tried and true plot of having your dopey, unemployed (add any other adjectives needed here) friend move into your house only to overstay his/her welcome? Guess not, as there have been hundreds of these types of movies released through the years. The question remaining now is — does You, Me and Dupree have any legs to stand on?

Mostly — no. Although Owen Wilson once again plays the doe-eyed, radically simplistic character he has parlayed into million dollar pay days (see “Wedding Crashers,” “Zoolander”) awfully well, it just doesn’t do enough to carry the movie.

Matt Dillon plays the best friend recently married to Kate Hudson who takes in Randolph Dupree (Wilson) when, you guessed it, he losses his job and finds himself homeless. Two days turns into months and during this time, he manages to burn part of the newlyweds house down, throw a wedge between the lovers and blatantly soak up all the resources in the house, like a heavy flow tampon inserted into a day-one period. Matt Dillon plays the straight guy relatively good, although I found his character rather boring. Kate Hudson, whom I initially thought was cute has caused me to get eye-glasses. Even though they try and prance her around in wife beaters and panties as much as possible, she just isn’t a sex symbol. She’s actually, rather creepy to look at for long periods of time.

There are several shining moments in the movie, though. Seth Rogen, as the pussy-whipped friend is quite funny. I know several guys who used to have balls the size of melons and since marriage have had them lopped off. Rogen’s character, Neil, doesn’t even attempt to hide the fact his nuts have been removed — he simply accepts it allows it shape the rest of his life. Very funny stuff. The surprise addition of Michael Douglas as the rich father was perfect casting. Douglas plays a cruel, conniving character; one that nearly rivals his portrayal of Gordon Gecko so many years earlier. Watching him try and covertly foil the marriage was a good subplot to this otherwise boring movie.

Overall, the laughs are short in supply and the laughs that are offered aren’t as funny as they should be. If you like Owen Wilson (which I do), you’ll find yourself rather aggravated at the lack of ingenuity in his character, but will at least find some humor in it. If you don’t like him, you can altogether skip You, Me and Dupree and be no worse off. The saving graces of the movie was the casting of the aforementioned people — and that is the only reason this movie isn’t getting the complete shit treatment. 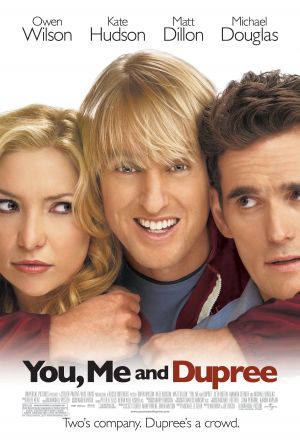