I had the opportunity to meet Adam Green almost exactly three years ago, at a screening of his horror/comedy sitcom “Holliston” at Emerson College in his native Massachusetts. What I appreciated about him the most — and what clearly shines through in all of his work that I have seen — was his unapologetic enthusiasm for all things scary. At least as much as Green is a creator he is also a fan, and his abundant honesty and energy bring welcome levity to a genre trademarked by deception and death. Even those who don’t personally like Green’s work, I believe, should appreciate the attitudes behind it.

Digging Up the Marrow, which Green wrote, directed, and starred in (alongside the incomparable Ray Wise) begins with a perfect example of his passionate fan boy reverence for his industry. At a horror convention, real life directors, actors, and fans are interviewed about what first attracted them to scary movies and whether or not they believe that monsters are — or could be — real. The obvious intention of this segment, with its silly background music and abundant references to horror canon via recognizable costumes, names, and faces, is to have the interviewees state that creatures are what made them love horror in the first place, and that they think or hope that such things might exist in real life, too.

Next, the movie switches from documentary to mockumentary when Adam embarks to meet William Dekker (Ray Wise, “The Lazarus Effect”), a man who claims to have definitive proof that monsters are, in fact, real. According to Dekker, all kinds of creatures thrive in an underground world that can be accessed through an abundance of special entrances, many of which he has personally found. Dekker believes that these creatures are misunderstood, and says Adam is the first director he has contacted to record them.

The rest of the film details Adam’s journey, along with his cameraman Will (cinematographer and producer Will Barratt), to look into William’s claims. This becomes increasingly more difficult and frightening as both William’s credibility, and reality as the filmmakers know it, start to be challenged by what they see.

Unsurprisingly, Ray Wise’s portrayal of William is the most enjoyable aspect of this film. Wise pulls off the perfect mixture of stubborn older man, deluded eccentric, and control freak necessary to justify William’s beliefs, rules, and desire to capture his story on film. His place in the fictional Adam’s documentary is clearly a role for which William has been preparing for decades; he is as genuinely excited when showing Adam and Will drawings of the creatures he’s seen as he is outraged when they ask questions he doesn’t want to answer or otherwise take the investigation into their own hands.

Another notable part of Digging Up the Marrow is its use of jump scares, the most overused scary movie tactic of all, sparsely and in unexpected places. The long moments the trio of monster hunters spends staring into the dark (William forbids Adam to turn on a light that would scare the creatures and Will hates the way nightvision looks) while William points out monsters the others cannot see both makes one wonder if William is making it all up and allows the first time a monster actually jumps out to be more unexpected and scary. Another factor that significantly contributes to this is, of course, the involvement and inspiration that artist Alex Pardee provided the film.

The ending of the movie also manages to be a pleasant combination of what veteran viewers would expect to happen and a satisfying twist or two. All in all, the best bits of Digging Up the Marrow are enough to overshadow its relentless “Holliston” plugging, less successful attempts at acknowledging the fourth wall (someone calling the movie found footage, someone who sees the monster Adam caught on tape asking who does his creature design, etc.), and the few instances when the dialogue drags on too long and messes up its pacing, making this movie as fun for audiences to watch as it must have been for Green to make. 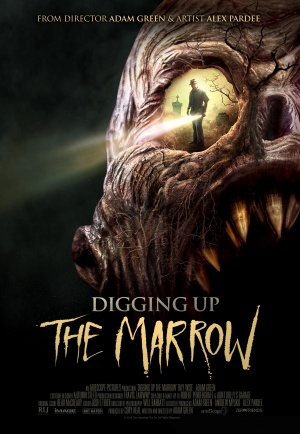