You know it’s a gripping film when the credits land and you look at your notepad and it’s blank. I found myself transfixed by writer-director Michael Peterson’s work here. Not because there’s anything dazzlingly original or groundbreaking about Knuckleball (except the title, which uniquely sucks), but because of the ease with which Peterson seems to find the ideal framing, the muscularity of his action scenes, and the palm-gripping tension he musters throughout.

Maximizing the setting — deep rural Canada in the midst of a winter storm — it’s gorgeously shot by feature newcomer Jon Thomas. With its pallid complexion and a steady, exacting lens, the sense of place is palpable. Isolated and unforgiving, you can practically feel the frozen ground beneath the characters’ feet.

In the main role, Luca Villacis (“The Midnight Man”) brilliantly underplays Henry, a kid dumped at his grandfather’s farmhouse while his parents bugger off to fix their marriage. The grandfather, Jacob, is played by Michael Ironside (“Terminator Salvation”), in a subtly menacing performance that plays into our childhood fears of the grumpy Grandpa. There’s an immediate sense that he’s either terribly sad or terribly angry — either way, it can’t be good.

As it turns out, things really aren’t good, from the moment Henry bumps into local bumpkin Dixon (Munro Chambers, “Turbo Kid”). The yokel — some kind of protégé of Jacob’s — is bonkers from the start and is inclined to harm Henry. With no one around to help him, Henry must survive Dixon’s onslaught.

It’s not entirely clear why Henry is so capable when it comes to producing “Home Alone”-like traps to confound Dixon. There’s a vague suggestion that his problem-solving is a result of retreating to video games as his parents argue.

What does it matter? This is fantastically dark fun. Chambers gets the Jack Nicholson role, letting loose with snarls and grins and limps, shambling after the kid with a baseball bat. There’s even a “Here’s Johnny!” bathroom moment, which unapologetically lifts Stanley Kubrick’s Big Bad Wolf, door-smashing camera movement.

Actually, Knuckleball borrows heavily from “The Shining” all around. The isolated snowbound setting; the bickering parents; the familicide themes; the ghosts recruiting the living to do their dirty work. There are slyer winks, too: The grandfather’s name is surely a reference to Penderecki’s “The Dream of Jacob,” a piece used to score the moment when Jack Torrance dreams of murdering his family. Understandably, this low-budget feature is a more straightforward proposition than Kubrick’s: A horribly handsome thriller-cum-slasher, with some superbly crafted suspense scenes.

The score, by David Arcus and Michelle Osis, is a minimalist suite of shrieking strings, which mostly suits the mood, and certainly complements the sense of a child in a world of adult menace beyond his comprehension.

Structurally, the film is a little imbalanced. The cutaways to the parents — indeed, the whole subplot about their shaky marriage — isn’t nearly as compelling as the tribulations of the boy. Especially as such diversions have a tendency to make a nonsense of time. When cutting back and forth, it seems like one character will achieve a lot more than the other in the meanwhile. This sounds like a needless nitpick, but when you have existential threats timed to a ticking clock, it can be disorientating.

Still, never a dull moment, and a plethora of legitimately brilliant moments. Hitchcock would have guffawed with glee at some of the red herrings and perils of the final act: A nail-biting siege that not only toys with our expectations of what will happen next, but which genre the film will dare touch upon. Knuckleball is an eminently watchable film, and I cannot wait to see what Peterson does next. 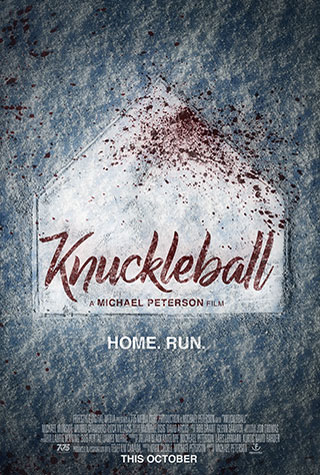