If cinematic quirkiness exists on a spectrum that ranges from charming to obnoxiously grating, then surely try-hard rom-com 3rd Street Blackout is pushing towards the latter end. Every character in the movie speaks and acts as though they know they’re in a quirky indie flick, but there’s no meta subtext at work as a result. This is just self-conscious filmmaking, a pale imitation of the brand of quirk that felt fresh twenty years ago when American indie cinema exploded and twenty-somethings rattling off snappy dialogue loaded with non-sequiturs was suddenly novel.

Maybe it can be novel again, but this picture won’t be the one to pull off such a feat. It’s all a bit of sandpaper to the brain or at least the ears. So many attempts to look natural while being completely artificial. So many irritating characters interacting irritatingly. So many shifts in time for no reason other than to revel in the stale freedom of non-linear storytelling.

Oh well, at least I know who to blame.

Negin Farsad and Jeremy Redleaf can shoulder nearly all the praise or condemnation one wants to heap on or hurl at the movie because they’re all over the credits. They directed the movie together from a script they wrote together and they star as the quirky couple at the movie’s core as well. So at least they’re ambitious. And they’re confident on both sides of the camera as well, so that’s nice, except they’re annoying as hell, so that’s not nice.

The plot of 3rd Street Blackout revolves around a couple who are knee-deep in the New York City technology scene and find themselves struggling to cope when a city-wide blackout temporarily cripples their connection. It’s a fine idea and clearly a very modern one, looking at the current generation’s reliance on smart phones for communication and examining the comedic elements of a blackout instead of the catastrophically chaotic ones present in thrillers.

All Mina (Farsad) and Rudy (Redleaf) have to deal with is unrefrigerated beer at the bar and the inability to send cinematically visualized text messages to each other. Of course, there needs to be more than that to stir the dramatic pot, so some contrived conflict is introduced in the form of an initially vaguely defined business trip hook-up that threatens to derail Mina and Rudy’s relationship.

The idea is that this is a big bummer, but it seems like it might be a blessing instead, saving the world from any more of their incessant rap battles. To be fair, Mina and Rudy make a convincing couple and Farsad imbues her character with a nervous energy that fits well the movie’s brand of jittery quirk, but Redleaf is a zombie by comparison. His performance is wooden and his character dull, plus it’s through Rudy that we meet and subsequently hang out with a pair of insufferable coders that out-irritate everyone and everything in the movie.

Anyone who’s ever encountered a romantic comedy before knows where this is going and Farsad and Redleaf are in no mood to buck genre expectations, so 3rd Street Blackout just feels like a tired retread painted over with a few millennial-minded broad brush strokes. Quirkiness isn’t immediately off-putting on its own, but the forced feeling of pseudo-naturally playing weird and wacky to the point that the playing becomes overly mechanical is a real mood-killer. It’s clear that technology is evolving, so why can’t the indie romantic comedy follow suit? 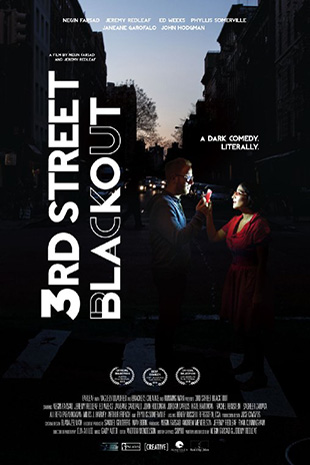