“Sometimes, rules are meant to be, well not necessarily broken, but certainly bent — and definitely reinterpreted; don’t you think?,” says Baloo to a bee-stung Mowgli as the man-cub angrily makes his way to the man-village where, as his sage mentor Bagheera has indicated, he must go back to if he wants to avoid a disaster to his, well, not necessarily kin, but certainly close friends — in fact so close are they that this is the only family he knows, and so he has been treated by the pack of wolves who brought him up as one of them. And here more than one rule, which could be applied to laws as old as the jungle itself, has been, well, if not broken, definitely bent, just to the edge of its breaking point, reinterpreted almost as though it had been rewritten. And this is what The Jungle Book (this and Kipling’s, and every single adaptation, including Disney’s 1967 animated film) really tells — don’t you think?

The law, as we see over and over again, is meant to be bent — even those laws we believe constitutive, the kind that are regulative above all, carved in stone, like the natural laws, only competing with the laws of physics in constitutiveness, are bent to their limits. How else could a man-cub, or a child, be living among wolves when man is but a wolf to men? or so the proverb says, yet here it is the wolf who is a man to wolves, and a woman too, since we should not forget that it is motherly love what Mowgli relishes the most since his early days with the pack. And what is most impressive of all is that the one who always plays by the rules, as Baloo asserts (being that his main problem), is precisely the one who bends them to their limits, for it was Bagheera who, out of compassion (we have little doubt that a panther can be wise, but compassionate? really) saves Mowgli, a just-orphaned infant (courtesy of Shere Khan, who lost his good looks that day on the hands of Mowgli’s father, what was his last deed on Earth) to take him to the wolves so that they can raise him as one of their kind. And the as one of is the real issue here, for it is the key in which all rules are bent, all laws are stretched.

Jon Favreau’s revisit to Disney’s 1967 animated classic (which I saw recently, bored to death by its episodic, looney-tooney pace), completely backed by the Gigantopithecus studio, mixes several of Rudyard Kipling’s stories and adds (through Justin Marks skillful pen) some more to the mix — just like Disney did, perhaps more successfully in this capacity, since, let’s not forget, characters that are thought of as classic now (i.e., King Louie or the festiveness in the original three amigos, the vultures that Disney made sing and dance and aid Mowgli while for Kipling were nothing but foul, grim carrion predators) were not designed by Rudyard but rather designated by Walter. This last revamp speaks better to these generations, and maybe to some as old as mine, for I am not old enough to hold dearly the 1967 film in my heart — not even because it had the genius Mexican comedian (perhaps the best of all time), Germán “Tin Tan” Valdés, dubbing the best Baloo ever to laze this world.

So back to The Jungle Book, to this one. Favreau heightens Shere Khan’s revenge to a point that is almost not family-friendly, yet this helps to heighten the tension as well and to make us understand, even nearly accept, that Mowgli (Neel Sethi in his first starring role) must leave the jungle, must go to exile, without foolishly falling for a girl (Disney’s horrible ending). No, Mowgli must go. Shere Khan (voice of Idris Elba, “Beasts of No Nation”), the tyrannic tiger, has sentenced him during a water truce (after one of the worst droughts the jungle has seen in years), leaving the alpha-male of the wolfpack, Akela (voice of Giancarlo Esposito, “The Scorch Trials”), with no other choice but to prioritize the good of the group and let the boy go, to the great chagrin of Mowgli’s extension-mom, Raksha (voice of Lupita Nyong’o, “The Force Awakens”), another warm mom grieving her Remus, or her Romulus, who suffers when she has to see his young cub face his fate, leave to exile — all by himself. Still, the way he sees it, this just means joining another pack, maybe another flock; he’s too good for humans, he knows; he belongs with animals, he thinks. But Bagheera (voice of Ben Kingsley, “The Walk”) knows well he must try to mend his folly and take him back where he, biologically at least, belongs. Then Mowgli faces great adventures and many wonderful encounters (i.e., with Kaa, the boa constrictor voiced by Scarlett Johansson, that, although originally male, couldn’t be any more dangerous than as a motherly temptress; with King Louie himself, voiced by a tired Christopher Walken, etc.). But the most important encounter for Mowgli comes when he finds Baloo (voice of Bill Murray, “St. Vincent,” fitting as a glove), a bear who cares for nothing but the bare necessities he must fill to keep alive. The bond between Mowgli and Baloo is what is at the core of Kipling’s original and of any ensuing adaptation — this one here does it again, and creates a fond bond, a virtuous friendship between a bear and a boy living a life as hedonistic as fictitious this could be in the surroundings they are in.

But the boy cannot run and run; he must go back to face his destiny: his being a man inside, capable of tricks that have tricked all species in this world and made them adapt to our means of survival, taking many of them to the brink of extinction. Mowgli, as any human (or so the other book, the Anthropos one, suggests) is capable of technology: That’s his true and only nature, artificiality.

Speaking of which, one cannot commend enough Favreau’s impressive visual work, bringing Kipling’s universe in all its anthropomorphic colonialism, playing with the virtuoso writer’s anthropomorphic bigotry with remarkable humor. Because that’s another thing this The Jungle Book achieves: A charming revamp to the 1967’s sense of humor — or lack thereof. Most of it comes from its constant glimpses to other movies, treating the source as a living thing, which can certainly be bent, and definitely reinterpreted. Take Louie for instance, a clear racial slur in Disney’s hands, who is here transformed into a HUGE orange orangutan (a Gigantopithecus etc.), an orange Kurtz and a hairy Brando out of the Apocalypse that reminds us is awaiting us should its spawn (and likely Republican nominee) get in office — definitely reinterpreted, right?

Another scene that stands out is Mowgli’s preview of humanity: The village looks like the mezzanine of Dante’s inferno’s ninth circle. This scene, actually, gets close to the poetry that the British author so effortlessly achieved in almost every description in his work. But perhaps one of Favreau’s greatest feats is that he gives back its original cruelty to this tale, sparing little scars on Mowgli’s marred skin. Yet, although is true that Favreau does try to emulate Kipling’s poetical descriptions with his camera and with his visuals, as the scene previously described, his greatest problem stems from the movie’s greatest selling point: The incontestable quality of its CGI ends up sanitizing Kipling’s continuous contrasts between bare necessity and organized nature, between the luminous world of the given and the dangerous world of the taken, the true strive for power that rules over bare life, in which hierarchies are only as good as the ability to kill predators and foes.

The original red flower, a beautiful metaphor in itself, left to the Promethean theft that changed all hierarchies in nature, that gives death to everything it gets, is here transformed into a visual gimmick that underscores the mythical depth of its source material. It does hint that the red flower is the root of distance between humans and animals, the transformation of their bare life, their animal life, their zoe, into their clothed life, the political animal caring only for their bios. With fire came the invention of legacies and with this the invention of the future. The human future was birthed through the terror of the torch threatening, at a distance, all other species (then all other groups, ethnicities, races, creeds, etc.). The red flower marked the physical border between jungle and civilization.

Favreau’s work does not get that far, and Kipling’s story of exile (if in a gaping exoticization of exile), of a man refusing to become himself, hiding from his own nature, running from it, from the environment that will inevitably transform him into the greatest predator of his own past, is turned into a spectacular entertainment. And then, what makes The Jungle Book so spectacular is also what ends up flattening it (as happens with almost all of Favreau’s movies, with the recent exception of “Chef” and, of course, his opera prima, “Made”); it is its artificiality that creates a sense of loss right at the heart of what helms our sense of wonder, the kind of wonder afforded by 3D glasses during uneven hits of cheap-and-not-so-cheap-thrills that move the film from fuss to fuss, from setting to setting, from blue screen to blue screen.

It is true that the law can be bent, as did the sense of cooperation that brought civilization about and that defied the intrinsic competition behind our struggle to survive, but — just as happens with the red flower — the artificiality that bends natural law is the same artificiality that brings it to its feet. Cooperation hence becomes colonization. And civilization a strange form of predation. I couldn’t help to think while I saw The Jungle Book for the second time, now on an early show with a bunch of anxious kids embarrassing their parents, that the same technology that made this movie possible was taking the real setting beyond the realms of extinction. I couldn’t help to think that, the way things go, this will be the only memory these kids will hold of what a jungle is: An artificial, hyperbolized scenery, perfectly aligned with their already tamed imaginations. 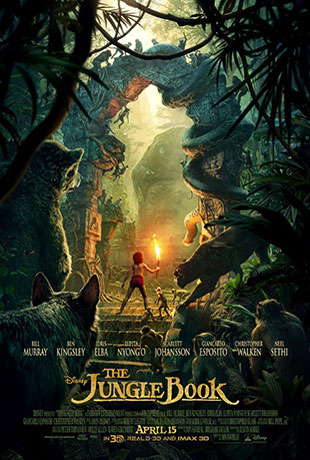