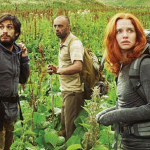 If, as the famous line from “Love Story” says, “Love means never having to say you’re sorry,” then Alex (Gael García Bernal) and Nica (Hani Furstenberg), a young couple engaged to be married in a few months, are on the right track. Summer vacationing in the Caucasus Mountains in the Republic of Georgia, Julia Loktev’s slow-paced but haunting film, The Loneliest Planet, follows the pair as they trek across the wilderness with back-packs on their shoulders. Based on the short story by Tom Bissell, “Expensive Trips Nowhere” which had its roots in an Ernest Hemingway story called “The Short Happy Life of Francis Macomber,” it is a thought-provoking film that has moments of brilliance, but its strict adherence to minimalism and the emotional distance it creates can be a barrier to full engagement.

Using minimal dialogue, meaning is conveyed mostly by images, silences and sound; the sound of rocks crunching, of water falling, of footsteps walking, at times aided by the lovely music of English composer Richard Skelton. Ironically, it is an exceedingly intimate film yet, as photographed by Chilean Inti Briones, yet it has a sense of a vast and empty, almost alien space that makes it look indeed like the loneliest planet. In the first frame, we hear a constant banging without knowing the source until we see the naked red-haired Nica bouncing up and down in a washbasin looking as if she’s freezing. Soon the bearded Alex hurriedly throws a bucket of warm water on her.

We do not learn anything about the characters other than what is apparent in their immediate surroundings and the fact that they are lovers. The first part of The Loneliest Planet is mostly playful as Nica and Alex make their way through the mountains or stop in the villages, having sex and drinking, conjugating verbs in Spanish, doing stand-on-your-head exercises, or rolling down a hill. Hiking across unknown territory in a country where you cannot speak the language — a fate common to most world travelers — can be daunting and often requires a guide. At one of their village stops, Alex and Nica hire a local guide named Dato (Bidzina Gujabidze, a real-life mountaineer), who speaks halting English and is not averse to telling dubious stories with racial overtones.

Loktev utilizes a documentary-type approach, concentrating on the everyday and the banal, yet there is an uneasy feeling that something unanticipated is going to happen. Around the mid-point of the film, as a result of Alex’s thoughtless reaction to a threatening event, the dynamic of the relationship shifts. Sullen looking and uncommunicative, they walk either in front or behind one another. Neither Alex nor Nica talk about the incident presumably out of embarrassment, or because they do not know what to say, seemingly confused about what just happened and what it means for their relationship.

The event seems to be saying, as suggested by the director, that traditional gender roles are still important. In an interview, Loktev states, “The film reaffirms very traditional gender roles. They’re hiking a mountain. That’s a place where traditional gender roles would show, I’d think. It reaffirms those traditional roles. That for me is the contradiction, for me personally. That I think of myself as a feminist, but I catch myself where I want a man to be a man. I want a man to be a real man.” The meaning of the critical event, however, is very much open to interpretation. Loktev relates that, at a showing, she heard two people sitting next to each other in the theater who saw it as two very different movies.

One said that the incident in the film is something no couple can ever recover from, while the other one asked, “What’s the big deal?” This only underscores the point that Nica, though she could have interpreted the incident in several different ways, decides that what occurred was significant without confirming her judgment with the person most involved or attempting to see the other person’s point of view, a primer of what does not work in relationships. If, as Werner Erhard put it, love is accepting someone the way that they are and the way they are not, then The Loneliest Planet, for all its remarkable qualities, in my view sends the wrong message and misses the opportunity for an important teachable moment.

'Movie Review: The Loneliest Planet (2011)' has no comments