Let me first start by saying, I never watched “Hostel.” There was something about glorifying the abject horror of torture made my stomach tense up and do a flip. Fast forwarding a few years and my stomach has gotten stronger on the inside (flabbier on the out). It’s probably a side effect of being married for so long. Whatever the reasoning, it is just in time for Hostel: Part II. Lucky me.

Hostel: Part II starts off with the lone survivor from the first movie, Paxton (Jay Hernandez) hiding out at the house of his girlfriend’s grandmother fearing for his life. Of course he doesn’t last much longer and just as soon as he’s extinguished we’re whisked away and are introduced to three girls, a wild child Whitney (Bijou Phillips), a rich prude Beth (Lauren German) and their butta-faced nerd friend Lorna (Heather Matarazzo). They’ve decided to go on a trip to Prague and upon departure are soon persuaded to alter their plans to include a 5-star spa in Slovakia. Upon checking into the hotel, the wheels begin turning — the super bored and super rich folks begin bidding on who gets to “play” with them.

From there, I expected to be transported into Hell and to wish to God I never saw the movie. Yet that didn’t happen. The horror and terror is practically nonexistent. I’m not about to go through the glorified gore or torture scenes, but I will say there are scythes, saws, clippers, knives and blunt instruments all used in various ways. Unfortunately, those ways did little to revolt me. A blood bath — whoopity doo. Electroshock “therapy” — seen it in “First Blood” (or was it “Rambo: First Blood Part II?”) years ago. Aside from the ending, which made me wince, very little originality went into the heart of this film.

And that’s where another problem arises. It takes far to long to even get to the heart of the movie. For the first hour we’re basically hanging around with these girls as they yip and yap at art school, on the train, in the hotel and at an outdoor festival. It probably wouldn’t have been so bad if I actually gave a shit about them but I didn’t. I realize these are expendable characters, but the director (Eli Roth) should have at least made an attempt to give me a way to relate to these girls. Maybe one takes care of old people in her spare time and has a heart of gold. Perhaps another takes in stray animals and she’s being kicked out her apartment because of it. Something — anything! I figured, if he couldn’t be bothered with helping me to identify with them, then I sure as hell couldn’t be bothered about their them or their fate either. Fuck ’em — let ’em die a horrible death.

The final nail in the coffin, and it pains me greatly to say it, is even the gratuitous nudity, which is staple in these exploitation type films, is junk. The first Hostel, from what I understand, was filled to the brim with tits, ass and sex. Hostel: Part II has very few scenes of nudity. I was expecting wave after luscious wave of European hotties baring it all for my enjoyment. Yet, instead of being dished a healthy dose of the female anatomy, I was instead given several shots of men in all their glory. This may be good for the sadistic women out there, but not, I repeat, not what I wanted to see. What a huge letdown.

Mostly, Hostel: Part II is major disappointment. I’ve seen far worse things surfing the web and ending up on sites like Ogrish (which surprisingly has cleaned itself up). As a matter of fact, the boredom from the first half of the movie was even more painful to watch than the “horrifying” torture scenes. And now that I’ve grown a full pair of manly balls, I’m going to rent the first movie just to see what all the fuss was about. I suspect it was over a whole lot of nothing, but it’s gotta be better than this. 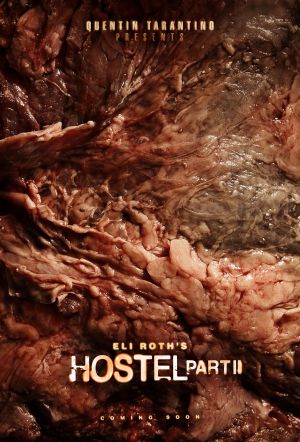