I usually avoid reviewing movies that go straight to the video counter at the local Blockbuster. There’s a reason they don’t get a theatrical release and why I don’t waste my time watching them — 98% of the time they suck ass. But with a little downtime and the need for a mindless teen movie (none playing at the cinema), I sat and watched Pretty Cool Too. I’m no better for it.

I’m not sure if there is actually a plot for Pretty Cool Too and I’m not sure it really needs one. Here’s the basics of it: This nerdy kid Walter (Eric Fagundes) lives next door to a nerdy girl Agatha (Julia Lehman) and to a reality television show house which houses five PlayPen girls. His parents give him a new phone called Genie (original, eh), which after a freak lightning storm, can control the actions of people. Of course after learning of this power, Walter uses it for his own selfish purposes — mainly getting girls naked.

Now, I sure as shit can’t review this movie on any of the typical artistic merits, you know things like: acting, writing, direction, etc. Pretty Cool Too isn’t going to win any awards and it wasn’t meant to. It’s all about pushing as much tits and ass onto the screen for any reason whatsoever. And to this end, it does a more than adequate job. The movie starts with a nice silicon set and every ten minutes or so it gets another pair onto screen for your viewing pleasure. In between those ten minutes, just to keep your interest piqued, the conversations are filled with sexual innuendos. I’ve also got to applaud the writers because I’ve never seen a movie (not counting porn) with so many girls faking orgasms — they’re all doing it.

And speaking of girls, Pretty Cool Too has got some eye candy. They’re basically a bunch of nobodies trying to make a living but hey, I don’t discriminate. Angela Dodson plays Brittany, the girlfriend of Walter’s brother Dave (James Ferris). She’s got a smoking body and from a few of the scenes, she shows she knows how to move it. The phone genie of course takes on an beautiful identity in the form of Brandi Williams. Only problem is she doesn’t bare any skin. Poor us. I was however, pleasantly surprised that Walter’s dorky love interest Julia Lehman, took her top off. She doesn’t compare with the other beach babes prancing around the flick, but she certainly gets props for putting out there. 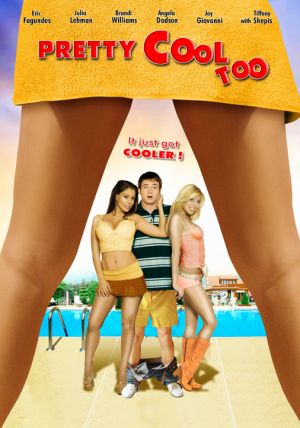