Lo and behold! Another third installment has hit the theaters! I barely recollect that there was an “Ocean’s Eleven” or that a sequel “Ocean’s Twelve” was made. So you can imagine my surprise when I’m suddenly smacked in the face by Ocean’s Thirteen. So here’s to hoping I can enjoy this movie without having had seen the first two . . .

Guess what? I could thoroughly enjoy Ocean’s Thirteen without having seen or knowing anything about the previous installments. Thankfully, the movie doesn’t rely too heavily on past relationships, so it was rather easy to follow along with the action. God knows I hate it when a movie expects its’ viewers to have seen previous episodes for them to enjoy the current showing — doesn’t everyone?

This time around Danny Ocean (George Clooney, “Michael Clayton”) and Rusty Ryan (Brad Pitt, “Mr. & Mrs. Smith”) round up their crew when their mentor Reuben Tishkoff (Elliott Gould) gets screwed over in a casino/hotel venture by hotel tycoon and all around creep Willie Bank (Al Pacino). With their friend bankrupted and comatose, they must figure out a way to right these wrongs (even though they all warned Reuben to not get involved).

So to get even, the boys decide to ruin Bank’s casino opening and permanently borrow his diamond collection. Their elaborate scheme is really a simple two-part plan. First, fix all the floor games (roulette, poker, craps, slots, etc.) so everyone betting is a winner. Second, get those winnings out the door so the lucky people don’t “reinvest” their money into the casino. As I said, the plan is simple — it’s putting the design in motion that is so complicated. Luckily, these guys are very resourceful. The aim is to get each of the guys in the group to cover portions of the plan, more specifically:

Of course things don’t always go as planned and that’s best part of the movie. Each time something veers of course it is a chance for the ensemble cast to interact and give an opportunity for several of them to shine. Bernie Mac brings the loud, excitable voice to the team. Matt Damon’s character is a bit of whiner and is begging for a more important role in the heist. Clooney and Pitt are the cools cats, never sweating and always acting like they’re in control. Their off-screen personalities are a perfect fit to their onscreen personas. I was craving more missteps to hear additional dialogue and to see what creative solutions they could dream up.

I do have a few minor issues though. Call it the realist side that hates to suspend reality, if you will. I found myself wondering about the following day. Surely the gaming commission will be asked to look into all the games that paid out so generously. I can’t imagine the insurance companies are going to swallow a $500,000,000 claim without choking. How about the tunneler? There are only two of them in existence; I suspect someone is going to notice one of laying about and ask a question or two. However, the most glaring inconsistency is in casino security. I’ve yet to enter a casino where I’m not being constantly being monitored, yet in this particular hotel (with the ultimate security device Gecko taking care of things) these guys move about freely. Highly unlikely.

Even with those irritants in the Vaseline, Ocean’s Thirteen is a lot of fun. What I liked the most was, the interactions of all these stars seemed very smooth and natural. Nothing forced or out of character. No one aping for more camera time. It’s clear everyone acting in this film had a great deal of fun shooting it and it comes across on the screen. So much so that you can look beyond the “issues” and just have fun too. 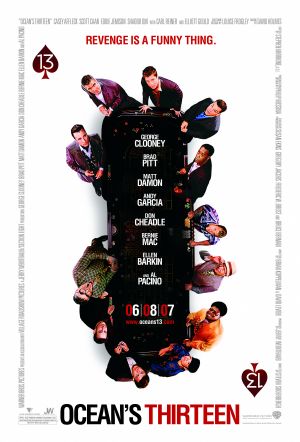