I hate documentaries. Let me qualify that a bit further — I hate Michael Moore documentaries. On a whole, my biggest gripe is that, although they do chronicle an event or a situation, they tend to present only one side of the story. And since I am on the other side of the political affiliation see-saw from Moore, I really get annoyed by his agenda. But the job at hand is to criticize without bias, so that’s what I’ll try my damnedest to do.

Sicko, in case you hadn’t heard, is a movie chronicling one of the biggest nightmares plaguing the United States. No, not Iraq (he’s already covered that in “Fahrenheit 9/11”). I’m talking about healthcare. It’s a big fucking mess and we all know it. Moore takes a well deserved stab at exposing the current situation here at home by asking, “Why does the most powerful country in the world have such terrible medical care?”

And on the surface it’s a good question ask. There is clearly a problem with the way healthcare is provided to the citizens of this country. The first problem is approximately, fifty million people don’t have insurance. This forces them to not see doctors for problems, which if treated in a timely manner, wouldn’t be life threatening. This actually costs us more in the long run, when emergency techniques are needed rather than preventative. The other problem unveiled is that those who do have insurance are either under-insured or denied access to due to cost controlling measures.

Moore gets to the heart of the problem: Money. The mean green, baby. Healthcare is big business here in the states. Really big. He interviews dozens of people who, while having insurance, were denied treatments for various reasons like:

The list goes on and on. But of course, Moore only showcases the horror stories. I’ve been rushed to a hospital for emergency care and my HMO didn’t deny my coverage. Same goes for my children. A lot of these denials could be resolved with a bit of foresight. Finding out what your policy says is the responsibility of all those who signed on the dotted line. Exceptions can be made with the insurance companies if you present to them a compelling case.

The answer? Well, Moore believes we should be following the lead of Canada, Britain, France and Cuba. Government sponsored healthcare. You get sick, no matter what your social class, you get service. To top it off, the care you get is free or pretty damn close to free. I’m all for it. I too believe everyone should have access to the best medical care possible. Money shouldn’t be a factor in deciding whether someone lives or dies. But there are a few glaring omissions from his presentation. What are the underlying reasons for offering free medical care? What is the toll to the country for providing free medical care? Does it have anything to do with failing economies or high unemployment rates? I personally don’t have a clue, but I’d love to see a more in-depth investigation on the issue.

So will I recommend Sicko? Sure, I will. It’s not nearly as good as “Roger & Me,” but it does provide an eye opening look at something that affects each and every one of us. All I ask is that you don’t swallow what he’s feeding you hook, line and sinker. He is presenting his own side and his own agenda — it’s good enough to start the discussion, but not nearly good enough to solve it. 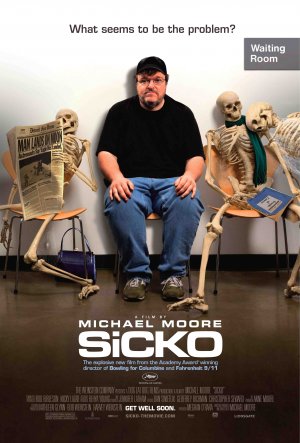