Vampires. I don’t think there is a cooler, monstrous entity imagined. They’re immortal. They’re tough as nails. They drink blood. Can they be any more awesome? It sure can — Lucy Liu can be cast as a bloodsucker. Now they’re smokin’ hot. Rise: Blood Hunter puts them all together; what’s not to love?

Well, let’s first begin with the premise. It’s been done countless times before in one fashion or another. This unto itself isn’t a reason to condemn a movie, the fact there isn’t a single thing original about Rise: Blood Hunter is. Lucy Liu is Sadie Blake, a hack reporter who, after digging a bit too deeply into the goth underground, finds herself transformed into a blood thirsty creature of the night. But that’s not okay with her. Under the tutelage of Arturo (Julio Oscar Mechoso), she tries to fight her hunger (Pitt did it better in “Interview with the Vampire”) and takes it upon herself get revenge by killing those that made her (Snipes did it better in “Blade”). Yawn.

The performances were particularly retching to watch too. Lucy Liu is cast completely wrong. It’s not that she doesn’t try but she simply can’t make her character believable. The vampire Sadie is supposed to be a tormented, driven, hard-ass hellbent on revenge. What I saw instead was a confused girl, who tried to say tough-guy lines because they were on her cue cards. Michael Chiklis portrayal of Detective Clyde Rawlins is basically a reenactment of his role as Detective Vic Mackey on “The Shield.” The only crowning achievement was seeing Nick Lachey cast in a movie. His acting is going to take him places (I’m kidding, of course).

Most upsetting to me though, is the fact the vampires in Rise: Blood Hunter are pussies. They get pushed around and beat up. What the fuck is up with that? Bishop (James D’Arcy), the leader if the vampire family is running away because he thinks a cop is after him. A vampire leader running from a human? Unthinkable. If this is what I can expect from a vampire now, I’ll just have to find a new undead creature to love — I’ve always thought the Mummy was underrated . . .

But don’t fret, all is not lost. Our heroine bares some of her assets for us. That’s right boys, there are plenty of scenes with her baring various portions of skin. There are even a few bare assed scenes and believe it or not her left tit is flashed very quickly — and when I say very quickly, I mean faster than a speeding bullet. But in my book, brief nudity still equals seeing a girl naked and I must say, as will 98% of all men polled, that’s a good thing. I was, however, a bit dismayed at coming to the realization that Liu has a pancake ass. I could have sworn she was bit more curvaceous. Oh well, beggars can’t be choosers.

All kidding aside though, Rise: Blood Hunter is a movie that should not have been made. It may be the first movie I’ve ever seen in which the writing, directing and acting were all equally bad. I’ll be surprised if it actually makes it’s way into a theater near you. At the very most, it belongs in the bargain bin at your local K-Mart. Look for it there in the near future, if you simply must have one the worst vampire depictions ever filmed in your collection. 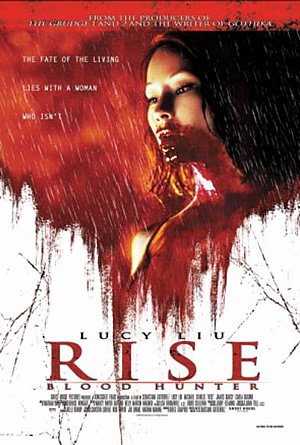