So many times, the third film of a franchise can either make or break the series. For example, the third of the original “Superman” movies (with Richard Pryor as the villain) set the series reeling (and “Superman IV: The Quest for Peace” destroyed it). The same can be said for the “Shrek,” “Ice Age,” “Spider-Man” and “Batman” films. Conversely, “Men in Black III” was much better than part two. This positive trend also works for the newest animated release, Madagascar 3: Europe’s Most Wanted, starring the vocal talents of Ben Stiller, Chris Rock, David Schwimmer, Jada Pinkett Smith, Sacha Baron Cohen, Bryan Cranston, Martin Short, Frances McDormand and many others.

Having escaped from the New York City Zoo in part one, Alex the Lion (Stiller), Marty the Zebra (Rock), Gloria the Hippopotamus (Smith) and Melman the Giraffe (Schwimmer) are still trapped on the island nation of Madagascar (after failing to escape in the dismal second installment). The penguins (the most popular characters of the franchise) and their chimpanzee allies — loaded with priceless jewels — have abandoned the foursome for the bright lights of Monte Carlo. So, the gang seeks to swim to Monaco to find the feisty, flightless birds and make their way back to the Big Apple. The trip is so easy, though; one wonders why they just didn’t swim away in the first place.

Ah, but once ashore things aren’t so easy — the pack meets their nemesis, the violent, gung-ho leader of the city’s animal control department, Capt. Chantel DuBois (McDormand). Having eliminated dozens of species during her reign, she lacks but one head to put on her wall — a lion’s. Seeing this as an opportunity to fill the void of that missing cranium, she begins a Terminator-like chase of Alex and his friends (she even gets down on all fours to track the beasts like a bloodhound). 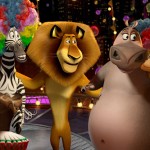 Trying to escape, the gang (now with the penguins and a few others, including King Julien (Cohen), in tow) jumps aboard a traveling circus train bound for Italy. Their stay is anything but enjoyable: They are shunned by the regular animal performers, including Gia the Jaguar (Jessica Chastain), Stephano the Sea Lion (Short) and the morose Russian Tiger, Vitaly (Cranston) and instead of being a well-crafted, talented, artistic traveling European exhibition; this circus is boring and dismal.

But ever resourceful Alex, seeing an opportunity to have the circus tour the states (equaling a free trip home), instructs the performers to liven up their acts and combine almost a Cirque du Soleil treatment with ridiculously complicated trapeze acts (by Gia and Alex), high wire acts (by Gloria and Melman), and cannon shots (lucky Stephano). Of course, this entire spectacle becomes complicated with various subplots, distractions and DuBois’ constant searching. Meanwhile, through all of this, King Julien is having a surreal, but sweet and funny love affair with a giant, mute, motorcycle-riding Russian bear.

Conceptually, Madagascar 3: Europe’s Most Wanted is all over the map, but if one can set aside their everyday troubles and soak in the silliness, it can be a wonderful experience. The brilliant hues and sparkling tones, non-stop action and goofy situations will more than entertain the younger set. The crisp animation — especially of the arid landscapes of Africa, the glitz of Monte Carlo and the ancient ruins of Rome (making this as exciting as any Bond or Bourne film), — snappy one liners and nice 3D effects will keep the adults’ attention, as well. Another plus is that few will recognize the vocals of many of the characters, which is a testament to the talent of the actors voicing them. Short’s Stephano and Cohan’s Julien are especially hilarious, while McDormand’s wacky, Inspector Clouseau-like French dogcatcher steals the show.

In this time of dark fantasy films (“Snow White and the Huntsman,” “Prometheus“), violent war dramas (“For Greater Glory“) and bland adult comedies (“What to Expect When You’re Expecting,” “Lola Versus“), it’s refreshing to see a fun, colorful movie the whole family can enjoy together. 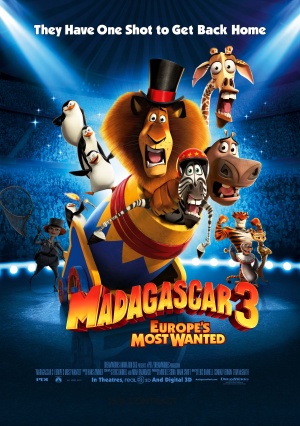