No Small Matter, a 74-minute documentary about early childhood development, is narrated by the actress Alfre Woodard (“Mississippi Grind”), who also served as executive producer. The “elevator pitch” for this documentary could be, “The dearth of quality child care services is alarming and we need to do something about it.” The doc presents dire statistics, testimonies by a legion of early childhood and human development experts, and “up close and personal” glimpses of working-class families going through their daily routines while trying to maintain or attain quality, professional child care. However, the film doesn’t quite make its case. Ironically, the reason is a basic misunderstanding of what a documentary can and can’t do. But more on this later.

There is some attention paid to the growing income discrepancies between affluent and poor families that exacerbates the problem, but this point is often swallowed up by discourses on the stages of childhood development. Thus, the political dimension of how the “haves” enjoy privileges the “have nots” can’t hope for is given short shrift. In addition, historical and cultural factors inherent in a two-tier child care system are also largely ignored. For example, the disappearance of the extended family, where grandma, grandpa, or other family member would be available during the work day, is never addressed. What is a primary focus of the film is a critique of the effects of the absence of competent child care — in particular, pre-school education — on society as a whole. Major effects include a country in which the children of low-income parents are developmentally behind in measures of achievement and cognitive growth. These children, when they become teenagers and young adults, do not have a foundation in cognitive development that will allow them to successfully complete college courses, not to mention succeed at high school level academics. But never mind school for a moment. Interviews with retired military commanders reveal that 71% of 17 to 25-year-olds aren’t qualified for military service.

It’s obvious that the producing partnerships that worked on the film are serious in their attempt to reveal a major societal problem and to advocate for a solution. Siskel/Jacobs Productions have produced films that promote social change before. For example, their documentary “Louder Than a Bomb,” presented a nationwide youth poetry festival, and was awarded the 2011 Humanitas Prize for documentary filmmaking. Co-director Danny Alpert, an activist filmmaker, has as well had his hands in many a documentary (even enjoying Academy Award and Emmy Award nominations for his work in “Legacy”). The list of organizations and individuals that contributed to No Small Matter would make up a sizable list.

So, a pertinent question to raise is how could a film that reflects extensive examination of the subject, including interviews with a range of authorities that expound on the importance of early childhood brain development who cite wide-ranging research (often conducted by the interviewees themselves) fail in conveying its message?

Now wait a minute! What about the nearly 20 experts that range from neuroscientists to cognitive psychologists, from frontline educators to heavily-endowed university researchers; all providing expert testimony that should convince even the most cantankerous, “show me” types that we have a child care/child development crisis in our country? There are enough articulate specialists representing Harvard, Georgetown, UC Berkeley, University of Washington, among other places, that would cause a deluge of parents to sign up their kids for intensive SAT prep courses (if they could afford them).

Alas, there’s the rub. A documentary containing so much information, unless purposefully designed for classroom use, is going to leave its audience with a general “call to arms,” but little specific recall. How many people will actually remember the statistics about child care opportunities, or the psycho-physiological causes of stress, or the history of early childhood education and developmental theory: All topics that are covered in the film? Wouldn’t a “talking head” delivering a “TED Talk” presentation be more efficient? Or even, god forbid, a book about the subject? I haven’t been in an audience for a documentary film that was populated by many people taking notes.

However, not all is lost. If No Small Matter encourages or inspires audience members to delve into the problem by seeking out primary or secondary sources, it will have served its purpose. Unfortunately, the people responsible for such profound social change in the country are politicians and others that decide on what is funded and how. So, yes, the film may serve as a motivator for stakeholders and activists. But based on the track record of exposé-oriented documentary films to turn advocacy into action, I’d hedge my bets. 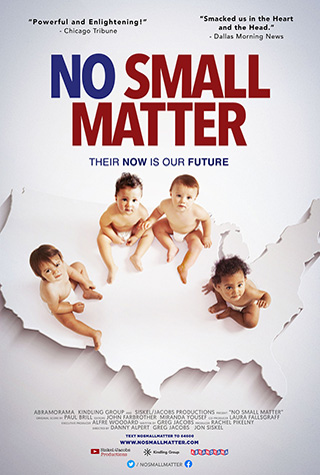