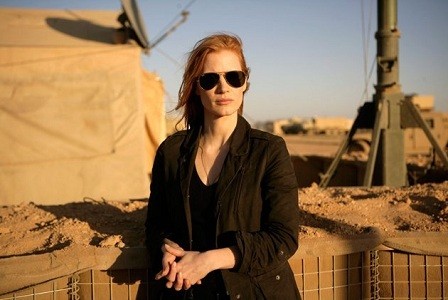 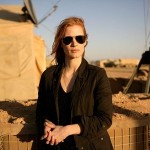 A cinematic peek behind the curtain of the raid that ended with Osama Bin Laden’s assassination in May 2011 is certainly an intriguing hook for a movie, but it’s far from the whole story that unfolds in Kathryn Bigelow’s tense, taut thriller Zero Dark Thirty. Achieving intimacy in this gigantic narrative about a decade-long manhunt for the most wanted guy on the planet is clearly a priority for Bigelow and screenwriter Mark Boal, who find in Jessica Chastain’s Maya a powerful character capable of poignantly personalizing the picture’s patriotism.

We first meet Maya in a torture chamber at an undisclosed location, where she watches her partner Dan (Jason Clarke) attempt to waterboard some information out of a detainee. Maya has a good poker face, but Chastain lets her body do the talking by quietly implying that the torture is tough to stomach and that she’s new to such tactics, or at least to the use of them in such close proximity to her. It’s our first hint at who Maya is and how this experience is constantly shaping her. She’s tough and stiff, but not robotic.

Chastain imbues her character with incredible strength and resolve while subtly suggesting the tender loneliness that lingers beneath the surface. As Maya’s arc becomes increasingly intertwined with Bin Laden’s fate, the job consumes her voraciously, leaving her with nothing but an obsessive and exhausting work ethic. Bigelow and Boal follow Maya so closely that the protagonist’s lack of a social life becomes apparent by means of occupational immersion. She’s working almost every moment she’s on screen. She seems to live without downtime.

Her obsession with finding Bin Laden is chronicled by Boal’s detailed script that carefully, compellingly explores the complications of an investigation enabled almost entirely by shots in the dark. The challenges of extracting even just a sliver of potential intel are expertly communicated as Maya and the rest of the team chase down every lead they can get their hands on and still find themselves hitting a wall at nearly every turn. Boal completely embraces the complexities of such a search for answers and hurls us into the time-consuming processes of sifting through footage and documents for any thing close to resembling a clue.

The rhythms of the investigation feel distinctly fresh and it is this uniqueness of procedural pacing that I find so impressive. Leads take a long time to come into focus and when some new piece of the puzzle is added, Boal tosses jargon at us and expects us to keep up. The lack of effort to fill us in on every bit of info the CIA agents spew automatically is actually invigorating, but that still makes it a gamble, just one that pays off. By lobbing the jargon at us and showing the characters perform tactics with explanations of their actions described only to each other, Bigelow and Boal essentially make us an honorary member of the team. 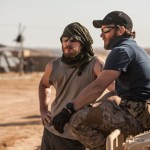 Resting before the raid.

This sensation filters through the narrative all the way to the raid, where all of Bigelow and Boal’s hard work to develop a personal connection to the story proves profoundly moving. Even though Maya doesn’t climb into the helicopter for the nighttime raid or pull any physical triggers (just metaphorical ones instead), her presence is felt throughout the sequence and her triumph is big and bold and undeniable. As Maya’s decade-long journey comes to a close, the raid takes on an emotional energy that stems from having traveled so far with her. That Zero Dark Thirty achieves such a striking dramatic conclusion without Maya even being on screen for most of the finale is a testament to Chastain’s astonishing performance and the growing emotional identity that she is able to lend to the entire movie from the start.

The raid sequence itself is a phenomenal piece of filmmaking that ranks among Bigelow’s sharpest achievements as a director. Lit so precisely that the night appears genuinely dark and disorienting without overcompensation to heighten the images, the sequence is also constantly switching over to the night vision perspectives of the raid team that take out every threat with fierce efficiency. We snake around corners of the compound building, following the team’s every move, seeing the events unfold in near real time. When we finally arrive at Bin Laden’s hiding spot, he is taken out in the same efficient manner as all the others. Bigelow doesn’t reserve any slow-motion theatrics for the big moment and doesn’t try to hit any final note of enthusiastic jingoism. She simply lets the moment happen and then ties it back into Maya’s concluding arc.

So Zero Dark Thirty returns to Maya, where it all began. Her participation gives this epic tale a sense of perspective and that much-needed counteracting intimacy. Chastain’s brilliantly tuned performance (thunderous one moment, nearly silent another) contains so much strength and determination all crammed into her tiny frame and she wears these attributes with a fiery passion that can be unleashed when necessary. She’s our guide through this treacherous hunt, a face we can trust and root for. She leads the way with confident grace. For nearly ten years, Maya searches for Bin Laden. For nearly three hours, we live the journey with her. This is time, cinematically condensed and powerfully personalized. 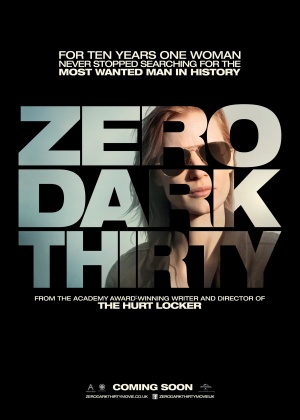