Believe it or not, Hardcore Henry is not the first project to dare to film from the first-person perspective. Found footage films like the “Paranormal Activity” franchise and “Cloverfield” have arguably made more memorable entries to the genre, but unlike them, Hardcore Henry benefits from taking itself lightly and catering to its core audience in obscene ways.

Like the Dwayne Johnson epic 2005 failure “Doom” before it, the film draws its inspiration from first-person shooter video games like 007 Legends and Call Of Duty, and just as gamers enjoy a good amount of violence and explosions in their games, Hardcore Henry offers a healthy dose, in this action-packed film. But like most popular games, the film suffers from a plot that doesn’t carry much weight at all.

As the film takes off, the audience is just as confused as our protagonist, the first scene puts us in the experimental chair of a futuristic laboratory as we lay our eyes on a beautiful, yet vague, scientist named Estelle (Haley Bennett, “The Equalizer”). Estelle explains to us that we’ve been in a horrible accident, that unfortunately cost us a few limbs (namely an arm and a leg) and she carefully replaces our extremities with advanced prosthetics that our yet to be hardcore hero is barely ready for. Lucky for us, Estelle seems overly willing to help us and she soon explains that our hero Henry is her husband.

Estelle also lets us (err, Henry) know that his memory has been wiped and his speaking mechanism is nonexistent. But before we can be rightfully introduced to what happened, we’re attacked by a telekinetic villain named Akan (Danila Kozlovsky, “Vampire Academy”), who intends to use us for his own sick intentions. The action takes off seamlessly at this point, Estelle eagerly helps us escape Akan’s grasp as we shoot down in an escape pod from the plane we were apparently just aboard.

Director Ilya Naishuller (who also wrote and stars in the movie) decides to keep us in the dark from this point forward — all we know is that Akan has more henchmen than he does personality traits, and if we want to survive we’ll have to keep taking them out one by one (or two by two). This is easier said than done because just like us, Henry isn’t completely sure of what he is capable of. Insert random cheeky sidekick Jimmy, (Sharlto Copley, “Maleficent”) a mercenary who knows exactly whats going on and how to help us.

Jimmy subtly turns into the star of Hardcore Henry as he has a voice and we soon learn that his character is just as indestructible as Henry (the explanation for how, as well as the explanations for everything else going on, is explained in the latter part of the film). In the meantime, we’re playing a game of hide and seek with Akan and his minions as Henry attempts to save the now kidnapped Estelle.

The film benefits from doing something that most action films don’t have the gall to do, that is, break formula and do something different. And while most of the gutsy scenes can be seen in the trailers of most of your favorite first-person shooter games, its still increasingly fun to watch on screen. This makes the audience feel involved in the film’s action (I’d say plot, but there really isn’t much of one to get involved with) which makes it a little easier for us to hold on long enough to actually be told what in the hell is going on. In the meantime its pure madness.

As Henry learns more, he gets stronger and braver, and not long after, he begins to parkour up buildings and take down tanks and helicopters. The film has the personality of a PlayStation best-seller, scenes like the strip club shootout and rooftop royal rumbles seem like clips straight from Grand Theft Auto 5 or Far Cry. The soundtrack is also game-like, offering an array of genres from the motivating piano of Queen’s “Don’t Stop Me Now” to the gentle sounds of The Temptation’s “My Girl,” the film’s atmosphere is comfortably appropriate throughout the debauchery.

It goes by quick too. Hardcore Henry is short and sweet (be careful sneezing, you may miss an outrageous sequence), not meant to make you think or come up with complex thoughts. It’s purpose is to make you say “Damn!” and “Holy Shit!” The film isn’t bad — to gamers it’ll probably be considered one of the better video game inspired films — but it doesn’t try to be good either, which is part of it’s boyish heart-pounding-thrill-ride charm. 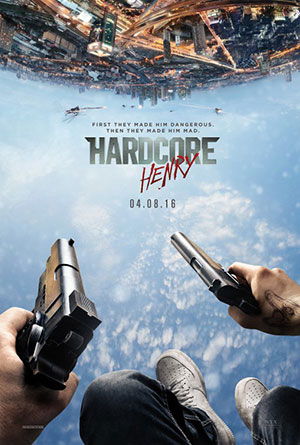