There are two ways that I noticed Goodnight Mommy was trying to unnerve me. First, there’s the image of a thirty-something-year-old woman whose face is wrapped in bandages, which gives her a striking resemblance to The Joker from “The Dark Knight.” Second, there’s this ominous notion that I need to beware all ten-year-old twin boys in the world because they have nothing better to do while playing outside other than collecting cockroaches and slapping each other silly.

It’s these quirky characteristics that take us into the enigmatic realm of Goodnight Mommy, which features the decent acting debuts of Lukas and Elias Schwarz, who play mischievous twin brothers that question whether the suspicious woman they live with (Susanne Wuest, “Judas Goat” TV series) is actually their real mother. Carefully constructing this understated film is Veronika Franz and Severin Fiala, the writing-directing duo who hail all the way from the land of Arnold Schwarzenegger. That’s Austria, people.

It must be noted that it is not easy for a film to successfully be anchored by only three characters (and even harder with fewer still). While it does create the unique opportunity for the audience to experience an intimate connection with the figures in the story, there remains the expectation that these few characters can also carry the story forward in a dynamic way. Here, the plot moves forward in a simplistic and straightforward manner as tensions in the house rise, but that’s not where the problem lays. Instead, its the motivations and backstories of the characters that are splashed with subtlety, ambiguity and other inconsistency traits that gets the film in trouble-y.

But this is not your average horror film (if you’re watching it from an American moviegoer perspective). Goodnight Mommy is not the type of tale that tries to scare you every five minutes with scenes of characters suddenly getting startled by another person, place or thing (like nearly every recent horror flick). The layers of the story unfolds in a way that informs the viewer of the world the boys are in and foreshadows the trouble that’s to come. Yet despite deftly shot sequences in the first act that tells the character’s reality and brings a “breath of fresh air” to those who are tired of tired, clichéd horror movies, it doesn’t escape an undeniable truth: Its narrative for over the first half of the film is cinematically dull.

No matter what subject a film covers, the cardinal sin is to bore your audience, which this film is utterly guilty of, even though it has its share of mystery and intrigue that draws you in as it sluggishly chugs along. The film’s subtlety and uncertainty along with the film’s surprise “Shyamalan-ian” revelations seem to ditch its attempts into a deeper exploration of each character’s motives and nature for their surface-level goals instead. It seems as though the filmmakers thought it was more important for us to remember this story for its use of soft core torture-porn than for the complex relationship of one family’s thought-provoking situation.

Nonetheless, as Oscar season nears, Goodnight Mommy will definitely be in the mix as a potential nominee since the film was submitted as Austria’s entry to Best Foreign Language Film category, although I suspect it has little chance of success. While watching this film, I was often reminded of last year’s little-seen gem from Australia, “The Babadook.” Now, that film had horror movie sensibilities American audiences were used to, but it was also better dramatically, and most of all, it enjoyed a memorable, knockout performance by lead actress Essie Davis. Since that film was largely ignored, don’t be shocked if this tiny flick from Austria doesn’t shock the world despite its “seemingly shocking” climax either. 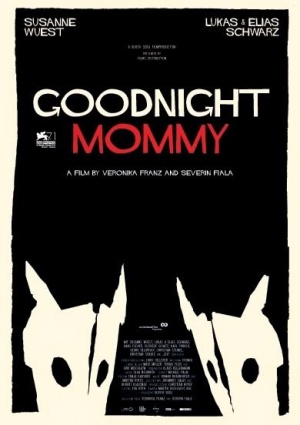