In the summer of 2007, I sat at the drive-in theater, waiting excitedly for Michael Bay’s “Transformers” to begin (it was my childhood on screen! Peter Cullen’s voice!!), and I was blown away by a trailer that no one saw coming. Choppy home-movie footage showed us a New York party that descended into chaos when the power flickered, explosions rocked distant streets, a strange animal roared, and the Statue of Liberty’s HEAD rolled by. No title appeared, and no other information gave us even a hint of what was coming, save for a January release date. Every time the trailer appeared online, producer J.J. Abrams’s team yanked it down, keeping everyone ravenous for information. Finally seeing “Cloverfield” in the theater, I was thrilled by a fantastic roller-coaster ride of a monster movie steeped in confusion, chaos, and panic on-screen that had moviegoers yearning desperately for a pause button. It cemented Abrams as a wily, brilliant producer, and subsequently, when people heard his name attached to a project, antennae leapt up in geeky anticipation.

In January, the trailer for 10 Cloverfield Lane dropped, and we all went into a frenzy again. Three people, holed up in an underground bunker, entertain themselves with puzzles, board games, and a pretty swanky jukebox. We watched as friendly interactions eroded into paranoia, fear, and a very clear and present danger, and the trailer ended with a man yelling desperately at a woman NOT to open the door. This time, we were given a title, and a release date merely two months away, when we could anxiously return to the “Cloverfield” universe.

The film begins with Michelle (Mary Elizabeth Winstead, “A Good Day to Die Hard”) hurriedly throwing items into a box, leaving behind her keys and an engagement ring. As she drives along a dark country road, she receives a call from her abandoned fiancé, who begs her to reconsider and come home, but her car is suddenly struck and sent careening off the road into a ditch. Regaining consciousness, Michelle finds her arm attached to an IV of fluid, and her knee attached to a chain on the wall. She is brought food by Howard (John Goodman, “Love the Coopers”), who saved her life, and intends on keeping her alive. He reveals to her that the world is under attack, and anyone she thinks is looking for her is likely dead. Howard, his associate Emmett (John Gallagher Jr., “Short Term 12”), and Michelle now survive in a bunker Howard prepared years ago, furnished with a living room, kitchen, dining area, and two pseudo-bedrooms. There are books, DVDs and VHS tapes, puzzles, board games, and the very clear understanding that Howard is in charge. Though Emmett tells her that he witnessed the attacks Howard describes, Michelle remains skeptical, until a series of events convinces her that there may truly be something to hide from on the outside. The three settle into a kind of routine, but paranoia also settles in, making the bunker much less cozy than Howard intended.

Dan Trachtenberg’s directorial debut is a masterpiece of tension and claustrophobia, closing us into a space with three very different people who are gradually wearing away at each other’s sanity. Upbeat oldies and board games juxtapose ironically with threats, sideways glances, and outright intimidation throughout the film and little reprieve is gifted to the audience at any point. John Goodman is absolutely stellar as Howard, a grizzled Navy veteran who “holds a black belt in conspiracy theories,” and thought ahead far enough to ensure his comfort and survival. He’s also generous enough to take two people into the bunker with him, wielding his Good Samaritan actions as a weapon equalled only by his gun. Emmett is much more laid back and comforting to Michelle, and to us, as we’re lulled by John Gallagher, Jr.’s farmboy charm, convinced she’s found an ally in him. Mary Elizabeth Winstead is fantastic as Michelle, who refuses to be the victim, strongly keeping her wits about her as she tries to figure out her next steps. At no point does she dissolve into helpless tears or wait for someone to rescue her. As audience members, we toil along with her, grappling with the dangers she suffers — does she remain with these strange men, trusting what they tell her about the end of the world? Or does she defy Howard, and escape into the open, taking the chance that the air is as toxic as he describes? The balance among the three actors is spectacular, suspenseful, and uncomfortable — a triumph of acting in a very enclosed space.

With all of that being said, however, there is a kind of letdown for anyone entering into the film expecting the chaos we enjoyed in “Cloverfield.” This is a very different type of monster movie, and I think it’s important to be aware of that going in. While I thoroughly appreciated the craft and talent exhibited by Goodman, Winstead, and Gallagher, Jr., I was disappointed by my own expectations. Producer J.J. Abrams described 10 Cloverfield Lane and “Cloverfield” as “two different rides at the same amusement park,” and as “blood relatives,” more than an original film and its sequel. The end of the film delivers on more of what I was expecting, but it comes across as rushed, as if producers felt they had to satiate our “Cloverfield” appetites. What’s especially important to note is that there is a kind of realism to what happens in 10 Cloverfield Lane; while the first film was a sci-fi/horror thrill ride we could write off as another monster movie, this film digs deeper, both literally and figuratively, into the human psyche, and reminds us that, truly, “monsters come in many forms.” 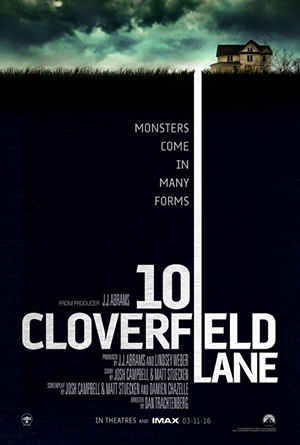