Greek director Yorgos Lanthimos, whose previous films have expressed a rather jaundiced view of humanity (“The Killing of a Sacred Deer,” “The Lobster”), has found a most appropriate target for his cynicism in his “mainstream” comedy, The Favourite, the story of sickly 18th century British monarch Queen Anne (Olivia Colman, “Murder on the Orient Express”) and the greedy confidants who compete for her affection and power. The film is mostly fictional and Lanthimos has warned us that, “anyone who comes to this movie looking for a history lesson is in the wrong movie.” If you think, however, that its depiction of the debauchery prevalent in Queen Anne’s court is exaggerated, perhaps you are unfamiliar with the history of the Tudor monarchs who made use of murder, torture, incest, child abuse, and the burning of heretics to solidify their power.

Written by Deborah Davis and Tony McNamara (“Doctor, Doctor” TV series), and shot by Robbie Ryan (“The Meyerowitz Stories”), The Favourite is presented in eight parts (each given a cutesy title) and filled with the “light” music of Bach, Handel, Purcell, and others to provide that 18th-century touch. Olivia Colman delivers a powerful and convincing performance as the frail, gout-ridden queen who cannot get around without crutches and eventually a wheel chair and has to rely on Lady Sarah, (Rachel Weisz, “Disobedience”), the wife of military commander Lord Marlborough (Mark Gatiss, “The Mercy”), and eventually the upstart Abigail Masham (Emma Stone, “Battle of the Sexes”) for physical and emotional support.

Abigail, a distant relative of the queen, who arrives at the palace caked in mud after a fall, asks for a touch of generosity, but ends up as a lowly servant. Nonetheless, the resourceful maid moves rapidly up the court ladder while telling us (before we discover for ourselves), “As it turns out, I am capable of much unpleasantness.” Both confidants of the queen soon engage in a bitter power struggle that leaves us longing for any likable characters in the film. While The Favourite posits a lesbian love triangle, female sexuality is relevant only as a weapon rather than an element of the heart. Queen Anne herself cuts a pathetic figure as she takes care of 17 rabbits in her quarters, sadly representing the number of children she lost through miscarriages, still births, or early childhood deaths.

While not in the best of health or state of mind, Anne still yields considerable clout (often through Lady Sarah) as she faces off with the over-matched Tory leader Lord Harley (Nicholas Hoult, “X-Men: Apocalypse”) over whether or not to increase the land tax to pay for the continuing war with France (he’s opposed). The only other male character of note is young Baron Samuel Masham (Joe Alwyn, “Mary Queen of Scots”) who courts and eventually wins Abigail’s hand in marriage. The film, however, is mostly about female empowerment but, in this case, there is only a difference in degree between male and female ruthlessness and the pigeons that are shot and killed on the palace grounds do not distinguish whether the bullet came from the hand of a man or a woman.

The verbal game playing is replete with quotable witticisms, sexual innuendos, and gratuitous insults. Much of it, however, is simply crude and filled with the anachronistic overuse of the “c” and “f” words. There is, however, much to admire in The Favourite. The physically ornate interiors of the palace are graciously designed by Fiona Crombie (“Una”) while the black and white period costumes created by Sandy Powell (“Wonderstruck”) present a believable 18th century atmosphere. The best part of the film, however, is the Oscar-worthy performances of Colman, Weisz, and Stone who take pleasure in their palace intrigue and in their delightful skewering of the aristocracy.

As for the purpose of all these shenanigans, director Lanthimos explains in an interview: “I wanted to make all that [the bigger picture] quite simpler so that it’s a film that feels relevant to us today, so you could imagine this happening anywhere in the world or anytime or place. Pare down the politics so it’s easier to understand the repercussions that come from the decisions that these three, or the actions that these three women take.”

The question must be asked, however, whether the world needs another reminder that cynicism is not the most productive ground of being in which to live one’s life, whether displayed by men or woman, aristocrats or commoners, presidents or film directors. 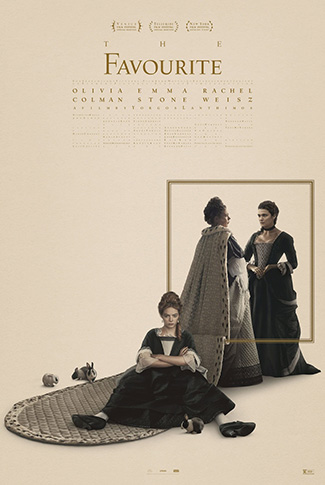