I’m thinking of a movie. It stars a man and a woman struggling against the elements to survive a vast, empty, lonesome, and perilous environment on their journey home. Oh, and it’s directed by someone with the last name of Cuarón. Anyone care to take a guess?

If you guessed “Gravity,” you’d be correct. But Desierto would’ve also been an acceptable answer (and ultimately the one I was looking for).

Admittedly, I’m reaching a bit with that comparison as Desierto doesn’t even attempt to come close to the ambition of Alfonso Cuarón’s Oscar-winning masterpiece, and that’s okay. It’s only the second feature-length effort from Alfonso’s son Jonás Cuarón and, although he’s got growing to do, it’s clear he’s a very resourceful filmmaker. Given very little to work with (i.e., a handful of actors and an arid, vacant landscape), Cuarón has mostly managed to elongate a solid premise into a competent, 94-minute minimalist thriller.

The core premise is pure genius in its timeliness. A truck illegally carrying a collection of Mexicans over the US border breaks down, and, led by the mechanic Moises (Gael García Bernal, “Rosewater”), they’re left to traverse the hostile border on foot. Along their way, they run into Sam (Jeffrey Dean Morgan, “Batman v Superman: Dawn of Justice”), a ruthless hunter acting as a one-man border patrolman who begins sniping the immigrants down for sport, initializing a cat-and-mouse thrill-ride across the desert void.

You’d think that an idea like that would be able to stretch itself easily enough into a feature-length film, but Desierto is only at its most engaging during the first hour. Sam’s initial attack is very gruesome, but once most of the immigrants are offed, the movie walks a fine line between being tense and monotonous. This is mainly because the desert landscape doesn’t lend itself to a variety of tense scenarios, and the chase between the three central characters becomes dull when it has no more surprises to throw at you.

This could have been remedied had there was some solid characterization, but Desierto falls short in that department as well. If you thought the characters in “Gravity” were paper-thin, then these characters are so thin, they’re almost invisible. Aside from the obvious parallels you can draw from the two male leads (Sam = Uncle Sam, Moises = Moses), Cuarón doesn’t explore the clashing ideologies much further. Everyone, however, is on their A-game performance-wise — especially Morgan, who’s having tons of fun essentially playing an uber-patriotic Negan — but aside from being given a vicious dog named Tracker that he clearly has a long history with, that’s the extent of his depth. Bernal and newcomer co-star Alondra Hidalgo do a fine job carrying the movie though, even if all they’re given to work with is a loose motivation and a sentimental stuffed bear.

That’s not to say the movie is completely bereft of tension. Cuarón utilizes the movie’s simplistic qualities to great effect during the first hour. Its effectiveness is boosted by some excellent cinematography by Damian Garcia. Despite having mostly empty space to shoot around, Garcia is successfully able to convey the feeling of being trapped while being threatened from afar. Woodkid also provides a notable, if sometimes overbearing score that helps fuel the anxiety. However, the movie hits a wall of tedium once the final confrontation initiates, and you begin to see the same landscapes, the same terrified facial expressions, and the same uninspired dialogue. All of this adds up to a very anticlimactic resolution.

It feels a little unfair to call a movie “empty” when it takes place in the desert, but with the talent behind it, Desierto could’ve achieved so much more. It’s also completely unfair to compare it to “Gravity,” but I feel there’s something to be said about how that movie used its open environment to great effect. This movie only achieves half that success. Its themes hit home harder than they would’ve had this movie been released at any other time, but a little more depth and a bit more variety would’ve made this a must-see. As it stands, it’s still an interesting thriller that might make an adequate rental once it hits Redbox. 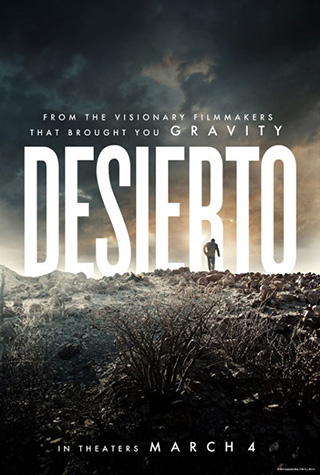