There is no doubt that superfans of the hugely popular 90’s British rock band Oasis can confidently claim to knowing the intimate details behind one of the most explosive musical acts to come out of working-class Manchester, England. English filmmaker Mat Whitecross’ (“Sex & Drugs & Rock & Roll”) revealing and roguish musical documentary Oasis: Supersonic probably will not uncover any overlooked territory that informed and avid followers of the sensational singing group led by the hostile Gallagher brothers already are familiar with. Still, this rollicking look into one of the most phenomenal British musical acts to explode on the music scene over two decades ago just to implode a short time later is just as curiously compelling despite the known backstory of these polarizing artists.

For those not old enough to have lived through the musical madness known as the “British Invasion” in the early 60’s sparked by the pop cultural impact of The Beatles, they certainly experienced that same sense of lyrical landscape that faithfully recalled the nostalgic throwback to the famed Fab Four with Oasis. Whatever the Beatle-esque selling point was also in Oasis that resonated with their rabid enthusiasts — early struggles en route to worldwide stardom, the physical mop-top look and swagger, the infectious soulful and bouncy tunes, the fanatical female following, behind-the-stage curtains feuding, public and private controversies, a dysfunctional brotherly upbringing, massive sellout concerts, undying worshiping, artistic differences. The observational spotlight featured in Oasis: Supersonic strolls down Memory Lane with inside accounts from bickering brothers Noel and Liam Gallagher, archival footage and insights from close family and associates that were exposed to the confrontational band’s triumphant and turbulent times.

Oasis: Supersonic employs the same producers responsible for the creative fare “Senna” and “Amy,” skillfully utilizing storytelling methods through the resourceful usage of new interviews while incorporating archive footage and never-seen-before takes of Oasis’s exclusive jam sessions. In doing so it methodically soars as it examines the rise of Oasis from the humble beginnings in 1991 to their remarkable performance in front of a quarter of a million concertgoers at Knebworth in 1996. Their magical five-year run on the pop charts was due to the contentious existence between Noel’s songwriting prowess and Liam’s silky vocals. It is a crying shame that deep-seeded conflict and unresolved angst between them defeated the powerful pop group at the peak of their creative prowess. How sad that the talented music-makers that orchestrated such heartfelt hits as “Champagne Supernova,” “Live Forever,” and “Wonderwall” would be their own worst enemy.

The Oasis story is not about the epic fall of a randy rock n’ roll band that overstayed their welcome until musical malaise inevitably set in without warning. Instead, the blustery blokes slit their own throats as they destroyed the glorious momentum and ruined their international standing at the pinnacle of success. Hence, Whitecross cross-examines all that were involved in the eventual Oasis meltdown — the Gallaghers, the band members, family notables and miscellaneous employees.

Whitecross revisits the Gallagher’s growing pains with the aid of their mother Peggy as she shares childhood photo collections of her future rock star sons. The revelations about the boys’ abusive father is discussed, causing one to wonder if he was the catalyst for what would be Noel and Liam’s personalized turmoil that they carried into adulthood. The documentary never shies away from the unsettling incidents that creep forward as the songbird sibs start to make music industry waves. As Oasis seizes its place, we are astounded by Noel’s effortless abilities for writing songs from tortured inspiration. Soon, the brotherly heartthrobs and their bandmates would catch fire while juggling the adversities and absurdities that circled their heated existences. Consequently, Oasis created a colorful commotion with modern-day Beatles-induced ballads that almost everyone seemed to eat up without question.

The flood gates, however, for casting a critical eye on Oasis — specifically the Gallagher duo — predictably opened soon after with a convincing bang. Unruly domestic confrontations, consistent clashes with the intrusive British paparazzi, performing lethargically during their first American gig at a Californian night club and getting banned from a Dutch ferry for rough-housing is just a few negative highlights that transpired. With this spontaneous, off-kilter showmanship, the backdoor buzz that conveniently defined the Gallaghers’ debauchery towards one another (or against whomever) was in fact the zenith of their fan’s adulation. Unfortunately, the brothers made Oasis a steady tabloid magnet for willing detractors to exploit and eventually help topple as well.

Again, there is really no earth-shattering tidbits here in Oasis: Supersonic to address a strife-ridden 90’s rock band that seemed to burst out of nowhere only to succumb to the tumultuous showbiz shenanigans that Noel and Liam crafted so foolishly. Oasis may be a frenzied footnote from yesteryear’s rock radar that served as a backdrop to the Bush/Clinton administrations, but one cannot dismiss their crazed musical minions who still escape musically through their seminal albums such as “Definitely Maybe” or “(What’s the Story”) Morning Glory?”

Feisty and unapologetic, Oasis: Supersonic impishly encourages a radical ride on Oasis’ symbolically aforementioned “Champagne Supernova.” So why not fasten your seat-belts . . . although the feral Gallaghers would probably prefer you travel without any safety hats. 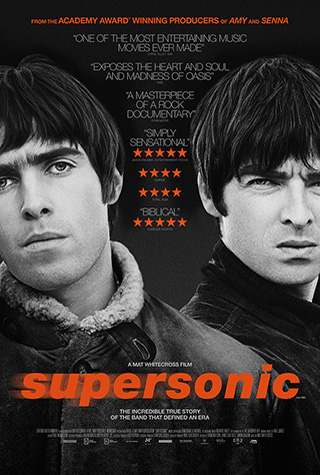