Those days that see no sunset are bound to become myths. Amy Winehouse was once like one of those twilightless days that just faded away from view. She did, however, fade in front of our eyes. We saw her dissipating, slowly disappearing — we saw her vanishing only to never watch her die.

Asif Kapadia’s most recent work, his documentary Amy, is a haunting look at someone who didn’t want to be looked at. She wanted to be listened to though. As much as she possessed one of the best singing voices ever recorded, she was further possessed by music whenever she decided to sing, from a happy birthday to a jazz classic to anything at all. And we listened, delightedly. But we also watched, obsessively. She never thought she was going to be famous; she repeatedly asserted that fame would probably drive her mad; she was confident, when her career was starting to take off, that people would understand that it was best to leave her alone making music, “they’ll see that’s what I’m good at.” And how wrong she was interpreting the people’s need, their addictive craving for myths.

If there’s a thing that hasn’t changed for humans across history and that has been a cultural constant everywhere in the world and anywhere in time is our innate ability to make myths; we are a mythopoetic kind. Of course, we so are because we seem to better understand whatever’s happening around us through stories, through narratives, and, to be sure, through positing characters inside them. But there are two kinds of people in this equation: Those who make myths and those who listen to them — they both, however, dwell in them.

Today, we know those who make myths as artists of many sorts. They are musicians, filmmakers, writers, entertainers, performers, podcasters, etc., etc. But today we tend to regard as well some of those myth-makers as myths-in-themselves, and we tend to elevate them to a superhuman stature only to place them in a realm beyond our own. We call them celebrities, and we have learned that much more relevant than knowing what they do is to know who they are, how they live . . . as if we had access to the lives of demiurges and demigods — as though we could place a camera in Olympus. We thus vote them in or out the heavens. Still, whatever their fate, we want full access, and we want to watch it. Whether their rise or their fall. Preferably both.

This is how we turn from myth-dwellers and/or myth-listeners into myth-consumers and/or myth-suckers. At some point in recent history, we found out that we all had the tools to tell our stories and the platforms to spread them. Social media has thus created the mirage that we can keep spreading stories about how very interesting our life is, and our thoughts, and our bodies, etc., etc., and we now believe that we all are (potentially) a myth-maker waiting to be discovered. What we haven’t gotten yet, so it seems, is that myth-making is not about the story itself, but rather about the form in which this story is told.

And this is what happens with Amy. We see how this “force of nature,” this larger than life figure with an even larger musical gift (perhaps one of the best jazz voices since Ella Fitzgerald), is a myth-maker in every possible sense. She didn’t become a myth-maker, she was one all the way through, and we can say this because she’s here humanized; her flaws and foibles, her neuroses and dispositions, her bents and virtues are seen without make-up — and they’re common, all too common.

As with every myth, there are always those who believe in it, those who live it and dwell therein and those who strive to deny it, those who want this myth dead once and for all — but this documentary is not for either kind. Neither for the praying flock nor for the preying folk, Amy is much more for anyone concerned with humanity itself, as it looks at the humanity of a person who was as talented as she was flawed.

Kapadia gets rid of the adjectival form of Amy Winehouse’s “tragic fate,” for what he shows us is nothing but her fate; the fate of a Jewish middle-class girl who suffered with her parents’ divorce, who developed serious “daddy issues” (and, consequently, serious issues with other men), who always managed to pull away those who genuinely cared for her and to keep close those who inflicted her harm. And yes, she was also extraordinarily gifted, and, more importantly, she did something with it. What we witness in Amy though is that all these “issues,” however serious, were not beyond the realm of the common; they weren’t tragic in themselves. And we don’t get to know about this “commonality” by comparison, but rather through the intimacy with which Kapadia tells Amy’s story.

Intimacy is precisely what our full access, our 24-hour-paparazzi-image-filled-tabloids-and-media cannot (will not) provide. On the contrary, what we see (and understand) in Amy is that both Winehouse’s problems and talents were only amplified by the public eye. Certainly, her talent was anything but common; it was, admittedly, exceptional, but what was behind it couldn’t be any more common. And here we come again to the myth-maker, whose gift is that of transforming the common into the transcendent so that we can better look at it and we can better understand it. What Amy Winehouse did was to transform most common issues she was both going through and wholeheartedly suffering from (i.e., a cheating boyfriend, an ugly breakup), and transform them into masterworks (e.g., “Back to Black,” which will doubtless remain as a masterpiece for the years to come). But perfection is very fragile. And Winehouse’s greatest paradox as an artist, one of the many quirks of self-destruction perhaps, is that she couldn’t create unless she destroyed — and she was her perennial target. Kapadia lets us see what a vulnerable person Amy was; her frailty only comparable to the strength of her voice.

So, it is intimacy what we get from Kapadia’s work — a responsible, penetrating and thoughtful approach. For intimacy cannot be achieved without reciprocity. This is where his ability as a storyteller stems from. Very much like his previous (and also brilliant) film, “Senna”, he lets the images flow, unfold and develop while the voices of their witnesses gush over them, sometimes commenting on them, sometimes just accompanying them. There are occasional juxtapositions though. But these do not seem framed by a clever director who’s trying to expose his subjects; rather, these juxtapositions are encouraged and fuelled by the subjects themselves. We can take as an example Amy’s father explaining why he thought that his daughter didn’t need to check into a rehabilitation program, but rather be left alone to make music — later on, it is he who takes a whole TV crew into Saint Lucia, where Amy was trying to retreat from media overexposure.

And overexposure is the key this film is tuned in. There is one thing that, as the film progresses, we understand that Amy was robbed of, and this she was dispossessed in a mythical manner and by a mythical creature. What Winehouse was denied was the time to get into terms with her issues, to solve them (or not) so as to settle the bill with her excesses (or not). But in order to do so, she had to “make the time” that we, the audience, never gave her. Rather, she continued to make myths; because there was too much money at stake, too many interests on the table, and too many people interested, wanting to see more of her, even if that meant to watch her falling . . . after all, there are very few things more worth watching than the fall of a myth (how many hits would a clip of Icarus’ splash have today in Youtube?). Amy got caught in the celebrity vortex that swallows one thing and one thing only: Time. And she just could not escape it.

Tony Bennett, an all time hero for Amy with whom she shared her last recording session, says at some point of the film that “life teaches you how to live it, if you live it long enough.” The audience, the billion-eyed creature that, from the outside, fuels and spirals this vortex, knows no time; myths are to be produced as fast as they can be consumed — continuously, perennially. This is the same creature that can, in the same breath, profess (rather yell) their love and then demand their money back when the object of their affection refuses to sing . . . to entertain them. This is to which most believers feel entitled in exchange for their (rather voluble) faith. After all, they, as good believers, are contributing to sustain the myth with their own money — however risible the amount.

In the end, Amy turns the eye to us who watch and watched, who wanted, who demanded to see. The film thus invites us to reflect upon our role as an audience and maybe even to share the responsibility of robbing Amy off the time she very much needed. Perhaps we’re willing to share this responsibility as much as we were willing to share the sense of entitlement we felt when we passed judgment on an artist we weren’t willing to give any time for herself. And why should we? we may ask, she has already signed a pact with eternity. 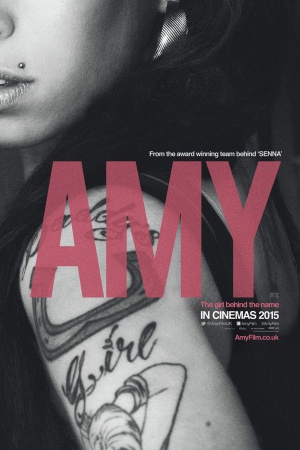