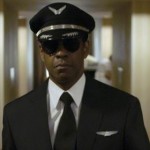 Like the character at their latest movie’s core, Denzel Washington and Robert Zemeckis are veterans of their respective occupations. They’re pros that know how to operate the big machinery of their creative positions and their experience affords them a comfortable confidence to get the job done safely. This level of skill is important to note because it helps keep their addiction drama Flight in the air for much of its running time, but it also backfires when it proves too tempting to take the easy route and coast through the narrative while flaunting an outdated bag of tricks. To say that the landing suffers as a result would be an understatement big enough to fly a plane through.

Washington is William “Whip” Whitaker, a deeply flawed pilot and full-time alcoholic who probably figures he can make up for his personal issues with that generously alliterative name of his. We meet him in a hotel room and watch as he kills his potential hangover with a line of cocaine less than two hours before his next flight. So we’re already accustomed to the idea that Whip likes to fly planes when he’s drunk and high, which we soon learn is something that Zemeckis and screenwriter John Gatins clearly disapprove of. But initially, Flight appears prepped to soar into morally murky territory when Whip takes a controversial approach to getting his plane through a momentary rough patch soon after liftoff. The co-pilot (Brian Geraghty) questions Whip’s method, but even when addled by drugs and drink, Whip apparently has it all under control. It’s an interesting setup because while it doesn’t necessarily condone Whip’s extracurricular activities, it certainly doesn’t condemn them either.

So when a piece of plane hardware malfunctions, sending the plane into a nosedive and forcing Whip to take heroic action to salvage an almost certainly fatal situation, Flight embarks on a potentially complex journey. Whip lands the plane and saves almost everyone, but while the media praises him, a toxicology report revealing his blood alcohol level threatens to ruin his career and send him to jail. We know that Whip’s inebriated state didn’t contribute to the crash, but the very nature of the situation raises questions about ethical responsibility. The beginnings of a strong character arc and brave exploration of grim morality begin to materialize, but it’s here that Flight abandons its ambitions and opts for a comically stilted gaze at alcoholism, a conflict suddenly reduced to a simplistically grunting message that suggests that not only is not drinking good, but that any drinking at all is bad.

Well, when any drinking at all leads to mowing down a stocked minibar or guzzling a bottle of vodka that’s wider than Washington’s head, yeah, I guess that’s bad. But what happened to all that gray area we were promised? Flight literally spells out its commentary by making sure that none of the supposed “good” people in the cast ever have a drink in their hands, while Whip has one practically glued to his palm. Of course, Whip drinks enough for everyone, but it eventually gets ridiculous how huge a brush Zemeckis insists on using to paint the strokes of his preachy message about the evils of alcohol consumption. When Whip starts staring at a glass of vodka with a pained expression and soft, sad piano notes tinkle in the background, subtlety is officially swapped for clichéd familiarity. That sore spot you’re feeling on your head is Zemeckis and Gatins bashing their message into your brain.

As Whip slips deeper down the rabbit hole of booze, Flight continues its descent by rolling out a cart of clichés that range from generic visual techniques to sappy stops along Whip’s arc where he sits around and drunkenly watches old home movies. An awkwardly introduced subplot involving a junkie (Kelly Reilly) who strikes up a relationship with Whip just as she’s beginning to seek help for her addiction issues is a dull distraction used mainly to make Whip’s alcoholism look even more pathetic (you know you have a problem when the junkie sneers at you). Reilly does a fine job and she saves her scenes by elevating her performance beyond the reaches of the script, but it’s still not enough to justify such a mechanically employed character. 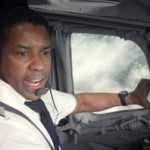 Other supporting cast members also deliver solid work, especially Bruce Greenwood as a union rep and old pal of Whip who wants desperately to help his friend. Don Cheadle shows up as a hotshot lawyer on Whip’s side and John Goodman plays a vulgar drug dealer who saunters into a few scenes for a bit of random comic relief. Gatins gives them all some crisp and occasionally funny dialogue to work with, so the script isn’t a total bust after the intriguing first act. Zemeckis juggles the cast in a laid-back manner and lets the movie unfold at a surprisingly quick pace that keeps it all in mostly entertaining territory for the bulky 138-minute running time. See what everyone can accomplish when they keep their hands off the bottle? Mediocrity! That’s not entirely fair, of course, because the acting really is quite strong, especially considering how good Washington is in spite of his character’s ridiculous arc, but Flight treats its themes and messages with such clunky clumsiness that it feels ripe for parody.

By trying to provide commentary on several subjects and eventually settling for a treacly treatise on the horrors of alcoholism, Zemeckis and Gatins spend way too much time on the blatantly obvious and seem to have only picked it as a focal point because it’s the easiest way to activate some good ol’ fashioned emotional manipulation. It’s still fun to see Zemeckis back behind the camera of a live-action picture (his first since “Cast Away” in 2000), but the adventurous innovation he experienced in between with motion capture projects hasn’t rubbed off on Flight. 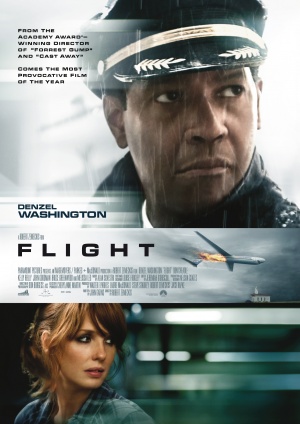