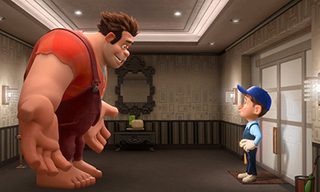 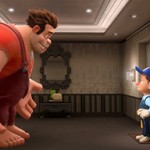 With a mix of “Alien,” “Toy Story” and a bit of originality, Walt Disney Studios has created a wonderfully fun and nostalgic effort sure to put a smile on the faces of young and old, alike. And while a bit long in the tooth for an animated film (108 minutes), Wreck-It Ralph nevertheless is one of the better productions of this genre in 2012.

For those who grew up in the video game world, say post 1978, the sights and sounds of this movie will no doubt have many viewers pointing at the screen in recognition of the many, many classic arcade machines (and even some of the newer systems, as well). Much of the charm of Wreck-It Ralph is based upon these recollections.

Plotwise, the title charcter (voiced by John C. Reilly, “Step Brothers“) has been destroying the same apartment building for more than 30 years in a game entitled “Fix-It Felix, Jr.,” but all he has to show for it is constantly being thrown off a roof and living a lonely, depressing life in a huge pile of bricks. The game’s hero, Felix, Jr. (voiced by Jack McBrayer, “30 Rock“), however, is forever honored with shiny medals and fetted by the structure’s residents for repairing Ralph’s damage.

Having had enough, Ralph confesses the desire to be a good guy — for a change — to members of his bad guy support group. Here, various villains led by a ghost from Pac-Man spout AA and Narcano platitutes, such as “Good is not bad, Ralph, and bad is good,” but he is determined to be the hero and win a medal for himself — even just once.

And so his adventure through the games of Litwik’s Fun Center begins.

First, after removing the armorplating of an inebriated soldier, Ralph enters the world of “Hero’s Duty” to kill bugs and climb buildings. Although petrified and frustrated, he still manages to swipe a huge medal by trickery and brute force. Then, upon escaping in a space pod (with a virus bug stowaway), he crash lands in the sickingly sweet world of “Sugar Rush,” where cute-as-a-button racers drive home-baked go-karts in a land ruled by King Candy (voice of Alan Tudyk, “Transformers: Dark of the Moon,” doing his best Ed Wynn). Here, Ralph also meets the pixilated “glitch” Vanellope von Schweetz (Sarah Silverman, “The School of Rock“), who steals his unearned medal as an entry fee for the race she is never allowed to participate in. The two form a reluctant alliance based upon the fact the winner will get a medal. She promises to win and he wrecks a bakery to make her a candy-coated race car. 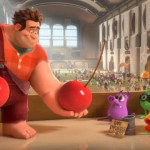 Meanwhile, Felix, Jr. and the leader from “Hero’s Duty,” Calhoun (Jane Lynch, “The 40-Year Old Virgin“), are frantically searching for the AWOL Ralph. If they cannot find him, “Fix-It Felix, Jr.” will be disconnected and the characters forced to live on the streets of Game Central Station. The duo are also trying to fight off an invasion of huge deadly bugs who are trying to take over “Sugar Rush,” as well.

There’s a lot of gunfire, explosions, last-minute rescues, a big auto race and derring-do. There is also a little romance and even a lot of heart in this story of trying to improve oneselves all the while attempting to maintain one’s core personality and individualism. Things are not always as they seem, but the overall look and feel of Wreck-It Ralph is a bright, splashing, colorful world that draws laughs and “Ohhhs” from parents as well as their children. Although do be warned, very young children may be frightened by some of the darker moments — the movie is rated PG for a reason.

Gamers, teens, twenty-somethings will also enjoy most of this film, although, it tends to sag a bit in the middle and could have used a bit more judicious editing (maybe ten minutes could have been shorn). Nonetheless, Director Rich Moore (some “Futurama” and “Drawn Together” episodes) exhibits a deft hand in his animated lexicon and Wreck-It Ralph certainly showcases that ability. 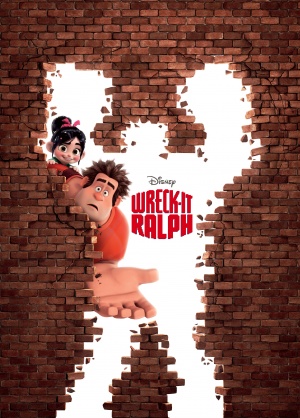