NASCAR. Who doesn’t love it? Seeing as it is the fastest growing “sport” in the nation, my guess is most everyone is loving it these days. To capitalize upon this, NASCAR authorized the making of Talladega Nights: The Ballad of Ricky Bobby a comedy which stars Will Ferrell as, you guessed it, Ricky Bobby, a dim-witted driver who is knocked from the top of his game by a French faggot, Jean Girard (played by Sacha Baron Cohen aka Ali G). For all intents and purposes this movie should be a slam dunk, as it reunites Will Ferrell, Judd Apatow and Adam McKay, all of whom together wrote and produced some hilarious movies like “Anchorman: The Legend of Ron Burgundy” and “The 40 Year Old Virgin.” Unfortunately, that’s why we play the game — cos there is no such thing as a sure thing (except for this trashy whore Sue I knew some time ago).

Mostly, Talladega Nights: The Ballad of Ricky Bobby relies on the comedy genius of Will Ferrell, to a fault. In the aforementioned movies, a strong ensemble cast was put together in an effort to avoid the predicament of having only one person carry the load. That isn’t to say that there aren’t any funny scenes in this movie. Indeed, there are several. Most notable is the interaction of Ferrell with Cohen — you can see they want to laugh their asses off while filming. The problem lays in the fact that there just isn’t enough going on. The plot is, of course, beyond pathetic (but I expected that) so there is no interest in seeing Ricky Bobby work on his relationship with his father or find a new love interest. With that, I expect a fuckload of funny things going on to force me to realize there is no substance. But the laughs are few and far between. And that hurts cos there are a million things to make fun of in NASCAR (fans, fans, fans, how stupid it is to drive in a circle 500 times, locales, etc.). Talladega Nights: The Ballad of Ricky Bobby only focuses on how stupid Ricky Bobby can be. And how stupid everyone around him is. After 30 minutes of the same shit, I began scratching my ass and getting listless. I shouldn’t have to mention, that this should never, ever happen!

Even if Talladega Nights: The Ballad of Ricky Bobby is mostly a dud, it is still a Will Ferrell movie and that should count for something. He shines in a several moments and although it isn’t really enough to make one go out to the movies to spend their life savings on, it will be good to watch on DVD after a few beers and shots. 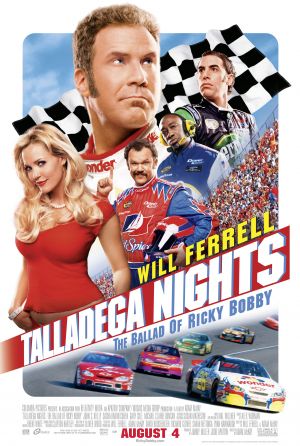