Delivering this week’s cautionary social media commentary (there’s more to life than Likes, kids!) with the subtlety of an internet meme, here’s a wholly unoriginal horror about unlikeable idiots being tortured by a cookie-cutter movie maniac.

There’s a reason why jock douchebags don’t tend to get the horror limelight, and Don’t Hang Up is the answer. There’s no ambiguity here: Sam (Gregg Sulkin, “Anti-Social”) and Brady (Garrett Clayton, “Welcome to Willits”) are prankster a-holes to the least sympathetic degree. When they aren’t driving people to suicide they are screwing each other over, quite literally.

We are quickly informed that Sam is the soulful one because we meet him as he listens to Ed Sheeran and scrolls through pictures of his kinda-girlfriend Peyton (Bella Dayne, “Humans” TV series). Then “brother for life” Brady comes over with beer, and sensitive Sam transforms into his cruel alter ego, and the pair record themselves prank-calling neighbors and unwitting strangers. (And there was me thinking this stuff died out with “Jackass.”)

Suddenly they are the recipients of a mysterious call from someone naming himself Mr. Lee (voiced by Philip Desmeules and later embodied by Parker Sawyers). He’s your standard, slightly bored-sounding Jigsaw-type psycho who wants them to “play a game.” And, inevitably, that game involves threatening the lives of loved ones unless the dudes set aside their bromance and start making some Difficult Moral Decisions — the likes of which you’ve seen before and which are given unpleasant “bros before hoes” overtones here.

The boring dynamic that emerges between Mr. Lee and his prey is mostly done through phone and laptop (via copyright-dodging “Frendz” and “Popshot” apps), leading to the interminable spectacle of buzzing cell notifications and dramatically inert speakerphone banter.

There are all kinds of logical issues with Don’t Hang Up, which might have been overlooked were it not so po-faced and lacking in playfulness. Like some ill-advised update of trash classic “Pulse,” Mr. Lee seems to have absolute control over every electrical appliance in the house, from the TV to the computer to the light switches. All from a netbook in the back of a Transit.

At one point — via a nonsensical twist — Mr. Lee manages to steal his way into the house. Except by this point his torture victims are outside the property, thus completely undermining any tension and rendering the trick pointless. Just one of many moments where you’ll be asking “Why?” before shaking it off as rhetorical.

Directing duty is shared between Damien Macé and Alexis Wajsbrot, and it’s a horror show in itself. For starters, the film is full of superfluous tracking shots, weaving through keyholes and car windows like a bargain bin “Panic Room.” Then there’s the color grading: An ugly green-brown smear, like everything is shot through swampwater. More crucially, the basic framing is a disaster, with neither director evidently aware of how to use relational space to build tension. Ergo, there is no tension.

The music doesn’t help. Oh man, the music. All thunderous drums and overbearing atonal strings rising to alleged significance, Aleksi Aubry-Carlson seems to be scoring a Christopher Nolan “Batman” movie. Startling orchestral crashes are used throughout, of course, as a substitute for effective editing.

I haven’t even mentioned Joe Johnson’s script yet, with which actors of Sulkin’s and Clayton’s moderate talents never had a hope. This is a film in which the maniac sends the “good” guys a picture of two people tied up, and because we’ve not yet been introduced, one of the characters needs to say aloud, “Oh my god! My parents!” As if we should care about his parents, anyway — I blame them for this alpha meathead making lives a misery, both on-screen and off.

Don’t Hang Up draws elements from a thousand better movies and mixes it into a tasteless paste. In its tight setting there are hints of Adam Wingard’s “You’re Next,” and in its social media zeitgeist-hunting a sprig of Chris Crow’s “Panic Button,” but there’s none of the nasty imaginativeness of the former or the characterization of the latter.

The home invasion sub-genre has been enjoying a recent resurgence, with the likes of “The Purge,” “Don’t Breathe” and “Hush” each bringing something fresh to the banquet. As for the online networking aspect, even “Unfriended” (despite its flaws) can’t be said to be unoriginal. But this desperately derivative entry doesn’t have a new idea in its head. And that’s a real problem for a film so mechanically flawed and so humorless, because it winds up providing no kind of pleasure, guilty or otherwise. 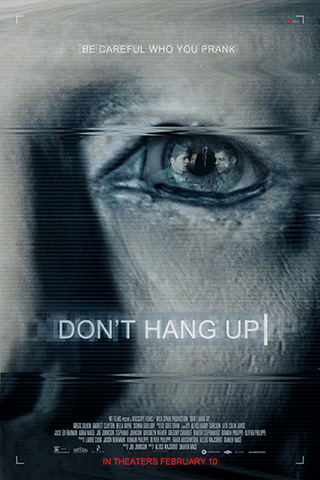