The film Robin’s Wish is a 77-minute documentary about Robin Williams, who died tragically by suicide in 2014 at the age of 63 as a result of the brutal disease called Lewy Body Dementia. The catalyst for producing the film was Susan Schneider Williams, Robin’s widow, who wished to explain the anguish Robin experienced and to demonstrate that his rare malady was the prima facie reason for his demise and not some personality defect, mood disorder, or temporary distress. The fact is that Williams suffered from a rare, insidious, and always fatal cognitive illness. The disease has been recognized by neurologists and other medical specialists, but unfamiliar to most laypeople. For Robin Williams fans, or for anyone that has followed Williams’ 40-year career as comic and actor, the story may be quite troubling. However, the movie serves as a revelation to put an end to the confusion and rumors about his decline as well as to celebrate the actor and comic’s successes. The result should be that viewers will remember Robin — not as that actor who took his own life, but as a great talent and selfless entertainer with a sensitive, empathic personality.

The documentary succeeds in its ambitions, particularly for Robin Williams fans. The film is a melding of a number of elements with the most touching being the depiction of the disorder’s effects on Robin’s wife, who lived through his ordeal. Initially, the camera shows her writing down her thoughts on a legal pad, a metaphor for her determination to record and communicate the truth about Robin’s life and death. Her on-camera interviews are a more visceral means of doing the same thing. You could argue that the entirety of Robin’s Wish is an attempt to bring an orderly explication to the chaos that became Robin’s life as the disease progressed until what was his “self” became hijacked by his dementia. Explanations of Lewy Body Dementia and its specific symptoms are clarified by several neurologists, one of whom claims that Robin had one of the worst cases of the disease he had witnessed. That there could be levels of severity of those suffering from it becomes hard to conceive.

Robin and his wife sought a diagnosis but could not get a satisfactory one to explain the memory loss, confusion, hallucinations, and depersonalization. As terrible as the disease is, for Robin and his loved ones not to understand the cause of the suffering added an additional circle to the hell that came with its symptoms.

However, this isn’t a film that is intended to present a clinical case study. The disease is discussed in terms of what happened in the last couple of years in Robin’s life. The documentary also reviews moments in the entertainer’s 40 years in show business, and many scenes display his talent. We also learn about Robin as a person — primarily through interviews with people that worked with him, and, more poignantly, through those who knew him as a friend or neighbor.

Shawn Levy, the director of Robin’s last feature film — “Night at the Museum: Secret of the Tomb” — relates how he, the cast, and crew noticed there was something not quite right with Williams although he continued to battle on through the filming. The performer’s determination reflects how he dealt with all the obstacles he faced. However, the depth of Robin’s suffering was a problem neither he nor anyone else could possibly have dealt with successfully. This was summed up when Levy describes how, during filming, the actor told him, “I don’t know what’s going on. I’m not me anymore.”

Interviews with Robin’s neighbors in Marin, California, an affluent but in no way luxurious town where one can have not simply a house but a home, provide another facet of the real Robin. Their reminiscences support the portrait his wife paints of him. He had a talent that he used in the service of his career, but it wasn’t who he was. Far from it. Those close to Robin describe him as a good friend, a great listener, and someone with tremendous empathy, which partially explains his acting talent and his improvisational skills. Those close to him are universal in stating how his sensitivity to the lives of others complemented his theatrical gifts and turbo-charged mind. This is perhaps most evident in Robin’s Wish when he is shown visiting troops in the Middle East. You observe him effortlessly communicating with the soldiers, convincingly demonstrating how he understands who they are and what they feel. This kindness is reflected in the appreciative faces of those he is there to “entertain.” If he had been wearing a uniform, he could have easily been taken for one of the guys, albeit the one they might have called “the wise guy.”

If you’ve seen Robin Williams doing “stand up” (the term is inaccurate; he rarely just stood there) or have seen him in some of his comic turns in film, you may not know that he also excelled in serious portrayals, revealing his darker side. These include roles in the films “Good Will Hunting,” “Insomnia,” and a small, but memorable role as a grieving husband in an episode of the TV series “Homicide: Life on the Street” entitled “Bop Gun.” There are many others.

In the context of Robin’s life and talent, the disease that latched on to him like a leech that sucked his cognitive faculties is deeply saddening. Understanding what happened helps clear up the mystery of his agony. In that sense, his wife Susan has succeeded in explaining her husband’s desperation, and hopefully provides some measure of satisfaction those that created the documentary as well as its audience.

The film could have been strengthened, however, albeit marginally. Yes, this was a tragedy, but acquiring the disease would be a tragedy for anyone. Addressing this point anywhere within the film — even for just a minute or two — would have given the film a more universal appeal, especially for those who may not have known the performer well. Regardless, it’s not my film, so I won’t press this point. The point is that the production team created something worthwhile with Robin’s Wish. So, I’ll leave it at that. 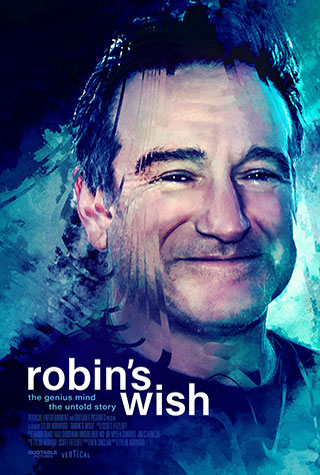