Few documentary subjects are more enigmatic than the life and careers of The Beatles. Few subjects have been spotlighted and discussed to the extent of the band’s effect on world culture, with no shortage of films from 1964’s “A Hard Day’s Night” until the present day. Ben Lewis returns to a well-worn director’s chair to helm a rather interesting redirection involving the super group’s treacherous days leading into the 1970s, focusing almost exclusively on their forming and managing of Apple Corps Ltd. The Beatles, Hippies and Hells Angels: Inside the Crazy World of Apple is heartily respectful of the works and people that made up the initial years of the company, but its structure and tone sadly embraces too much conventionalism, ultimately truncating its subjects’ passions.

Stylish animation credit sequences evocative of “Yellow Submarine” and even “Monty Python” introduce The Beatles at the peak of their popularity. Prompted in 1967 by the band facing possible bankruptcy due to back taxes, Apple Corps became one of the most unruly and outlandish companies to ever exist in Britain. Creating a plethora of subsidiaries under their personal music label, they brought chaotic hippies together to form a boutique, a hair salon, a tech start-up, a poetry division, and a film production department (in-part responsible for George Dunning’s 1968 masterpiece, “Yellow Submarine”).

Traditional interviews, Ken Burns-like photographic manipulation, stock footage, and convivial animated recreations paint the world of this company spreading the hippie movement only to lose the spirit of why it began; all the while narrated by the activist, actor and author Peter Coyote, who accompanied the Hells Angels to meet The Beatles. The sleek editing by Claire Guillon and Cliff West allows the story great ease as it shifts perspectives, though the film isn’t all that visually interesting outside of the quirky animation by Fons Schiedon. Its humdrum approach, paced chronologically with odd moments of flair when addressing greater details of a particularly vivid memory, leave not too great an impression beyond that of typical History Channel fare.

Though containing many covers of The Beatles songs serving primarily as the score, the original music by composer Adem Ilhan sounds too close to Daniel Pemberton’s BAFTA-nominated score for The Movies video game. The sound and background music are mixed poorly with numerous sharp offsets in volume, littered sporadically with audio pops. Fundamentally, Lewis takes few bold steps throughout directing his spinning narrative while ignoring elements that required a firmer editorial sense, thusly neutering its intensity.

While Apple Corps is full of certain intrigue and large importance, this documentary rarely employs techniques that actually intrigued me. Interviewees are delightful in their recollections, Coyote is obviously having a ball narrating, and the animation remains the highest moments of the whole experience. However, the film forgot to be convincing as to why this story is indelible beyond what is already widely known about The Beatles. The Beatles, Hippies and Hells Angels: Inside the Crazy World of Apple provides an interesting introduction to its subject, but doesn’t sate enough curiosity by memorable means to warrant future visitations.

'Movie Review: The Beatles, Hippies and Hells Angels: Inside the Crazy World of Apple (2017)' has no comments 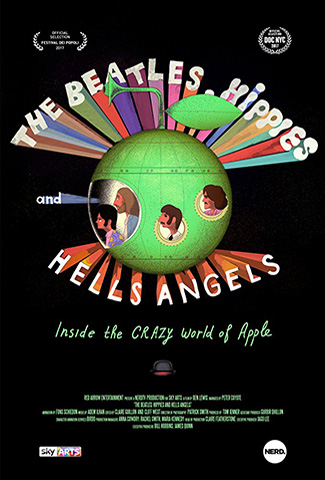 The Beatles, Hippies and Hells Angels: Inside the Crazy World of Apple (2017)

Home » Reviews » Movie Review: The Beatles, Hippies and Hells Angels: Inside the Crazy World of Apple (2017)